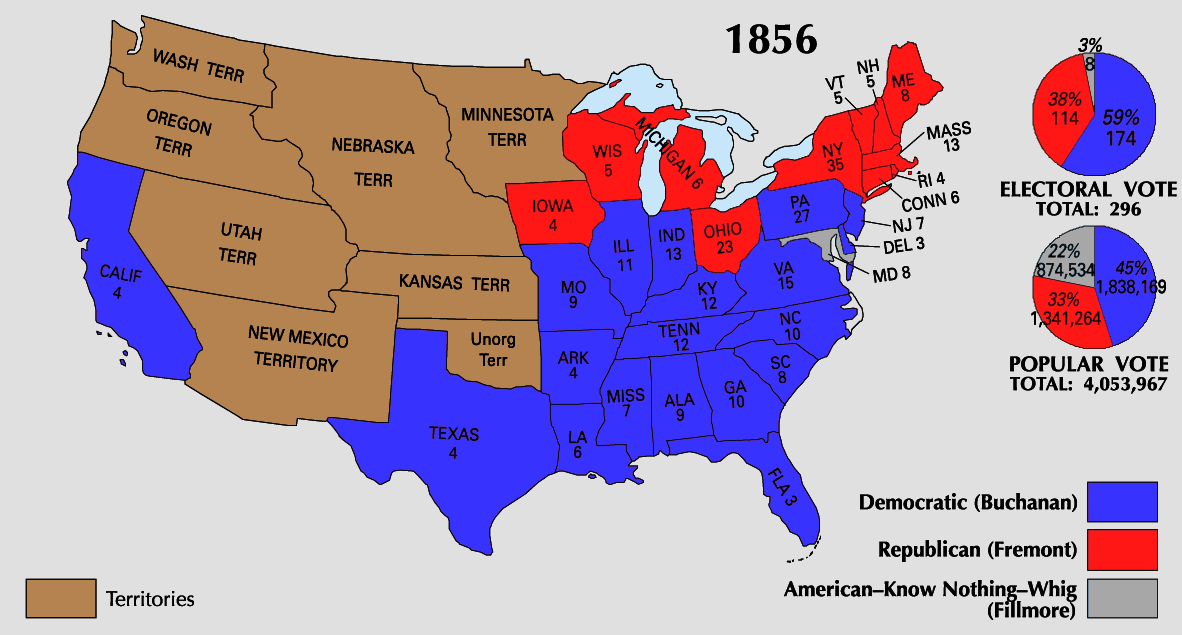 The United States presidential election of 1856 was unusually heated. Republican candidate condemned the , and crusaded against the and the expansion of slavery, while Democrat warned that the Republicans were extremists whose victory would lead to civil war. The Democrats endorsed the moderate “popular sovereignty” approach to slavery expansion utilized in the Kansas-Nebraska Act. Former President represented a third party, the relatively new American Party or "Know-Nothings". The Know Nothings, who ignored the slavery issue in favor of anti-immigration policies, won almost a quarter of the vote.

The incumbent President, , was defeated in his effort to be renominated by the Democrats, who instead selected of Pennsylvania; this was thanks in part to the fact that the Kansas-Nebraska Act divided Democrats. The Whig Party had disintegrated over the issue of slavery, and new organizations such as the Republican Party and the American Party competed to replace them. The Republicans nominated John Frémont of as their first standard bearer, over Senator , and the Know-Nothings nominated former President of . Perennial candidate Daniel Pratt also ran.

Frémont received fewer than 600 votes from s—those all coming from Delaware and Maryland. The electoral college results indicated, however, that the Republicans could likely win the next election in 1860 by winning just two more states—such as Pennsylvania and Illinois.

The 1856 presidential election was primarily waged among three political parties, though other parties had been active in the spring of the year. The conventions of these parties are considered below in chronological order.

The American Party was the successor to the earlier Native American Party and was controlled by Know-Nothing leaders. The American Party absorbed most of the former Whig Party in 1854, and by 1855 it had established itself as the chief opposition party to the Democrats. In the 82 races for U.S. House in 1855, the American Party ran 76 candidates, 35 of whom won. None of the six Independents or Whigs who ran in these races was elected. The party then succeeded in electing the Speaker of the House in the 34th Congress.

The American National Convention was held in National Hall in , on February 22-25, 1856. Following the decision by party leaders in 1855 not to press the slavery issue, the convention had to decide how to deal with the Ohio Party, which was vocally anti-slavery. The convention closed the Ohio chapter and re-opened it under more moderate leadership. The more vigorous anti-slavery delegates bolted. Former President was nominated for President with 179 votes out of the 234 votes. The convention chose Andrew J. Donelson of for vice president with 181 votes to 30 scattering and 24 abstaining.

Anti-slavery Americans from the North organized themselves into a political party after the Fillmore nomination in Philadelphia. They called their national convention to be held in New York City just prior to the Republican National Convention. Party leaders hoped to nominate a joint ticket with the Republicans to defeat Buchanan. The [http://www.ourcampaigns.com/RaceDetail.html?RaceID=229114 national convention was held on 6/12-20/1856 in New York City] . The delegates held a series of ballots for President without being able to choose a nominee until it became clear that the Republican National Convention would not cooperate. was nominated for President on the 10th ballot over John C. Fremont and John McLean, but Banks immediately wired the convention that he did not want to run. The delegates, preparing to return home, unanimously nominated Fremont on the 11th ballot. The chairman of the convention, William F. Johnston, was nominated for vice president; he later withdrew.

A group of North American delegates called the North American Seceders withdrew from the convention and met separately. They objected to the attempt to work with the Republican Party. The Seceders held their own [http://www.ourcampaigns.com/RaceDetail.html?RaceID=229113 national convention on 6/16-17/1856] . 19 delegates unanimously nominated Robert F. Stockton for President and Kenneth Raynor for Vice President. The Seceders' ticket later withdrew from the contest.

The first [http://www.ourcampaigns.com/RaceDetail.html?RaceID=57951 Republican National Convention] was held in the Musical Fund Hall in Philadelphia PA on 6/17-19/1856. The convention approved an anti-slavery platform, calling for congressional sovereignty of the territories, an end to polygamy in Mormon settlements, and federal assistance for a transcontinental railroad. was nominated for President over , and was nominated for Vice President over .

The Whig Party was reeling from electoral losses since 1852. Half of their leaders in the South bolted to the Democrats, while in the North the Whigs were moribund. The party remained alive in states like New York and Pennsylvania by joining the anti-slavery movement.

The 5th (and last) [http://www.ourcampaigns.com/RaceDetail.html?RaceID=229111 Whig National Convention] was held in the Hall of the Maryland Institute in Baltimore on 9/17-18/1856. There were 150 delegates from 26 states. Though party leaders wanted to keep the Whig Party alive, they doomed it by deciding to endorse the American Party's national ticket of Fillmore and Donelson. The 150 Whig delegates voted unanimously to endorse the Fillmore/Donelson ticket.

None of the three candidates took to the stump. Republicans opposed the extension of slavery into the territories — in fact, their slogan was "Free speech, free press, , free men, Frémont and victory!" The Republicans thus crusaded against the , warning it was destroying republican values. Democrats counter-crusaded by warning that a Republican victory would bring civil war.

The Republican platform opposed the repeal of the through the and the policy of popular sovereignty in deciding whether a state would enter the Union as a free or slave state. The Republicans also accused the Pierce administration of allowing a fraudulent territorial government to be imposed upon the citizens of the Kansas Territory, allowing the violence that had raged in , and advocated the immediate admittance of as a free state. Along with opposing the spread of slavery into the continental territories of the United States the party also opposed the which advocated the annexation of from . In summation the campaign's true focus was against the system of slavery, which they felt was destroying the Republican values that the Union had been founded upon.

The Democratic platform supported the Kansas-Nebraska Act and the system of popular sovereignty established in the Western territories. The party supported the pro-slavery territorial legislature elected in Kansas, opposing the free state elements within Kansas and castigated the as an illegal document written during an illegal convention. The Democrats also supported the plan to annex Cuba, advocated in the Ostend Manifesto, which Buchanan helped devise while serving as minister to Britain. The most influential aspect of the Democratic campaign was a warning that a Republican victory would lead to the secession of numerous southern states.

The campaign had a different nature in the free states from that in the slave states. The North experienced a three-way campaign, which Fremont won with 45% of the vote to 41% for Buchanan and 13% for Fillmore. That translated into an electoral vote margin of 114-62 in favor of Fremont. In the South, however, the campaign was strictly a Buchanan vs. Fillmore race. Buchanan won there by a 56-44% margin, good for an 112-8 electoral vote margin. Nationwide, Buchanan won 174 electoral votes, a majority, and was thus elected. Of the 15 slave states, the only states in which Frémont received any votes at all were Delaware (310) and Maryland (285).

(a) "The popular vote figures exclude where the Electors were chosen by the state legislature rather than by popular vote."