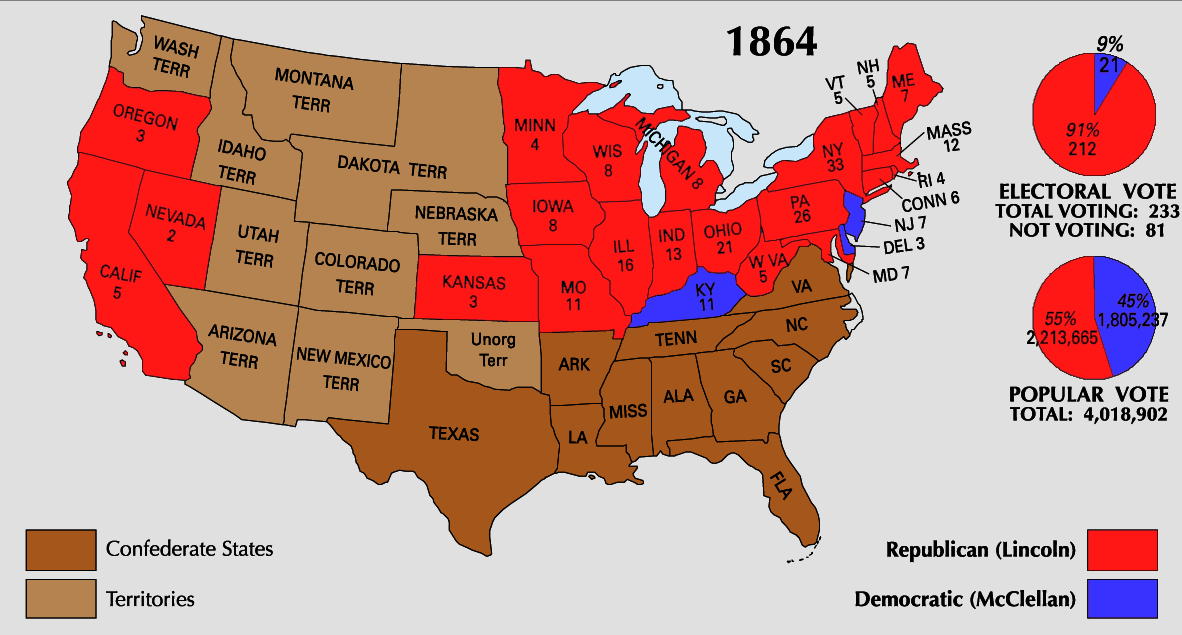 In the United States Presidential election of 1864, was re-elected as president. Lincoln had been a Republican but he ran under the National Union Party banner against his former top Civil War general, the Democratic candidate, , and the Radical Republican Party candidate, . McClellan was the "peace candidate" but did not personally believe in his party's platform. Frémont abandoned his political campaign in September 1864, after he brokered a political deal in which Lincoln removed U.S. Postmaster General from office.

The election of 1864 was conducted during the Civil War, and as such, none of the states controlled by governments loyal to the participated. This was the first time any nation held a national election in the midst of a civil war.

Republicans across the country were jittery during the summer of 1864. Confederate forces had triumphed at the and the . In addition, the war was continuing to take a very high toll. The prospect of a long, never-ending war started to make the "negotiated peace" offered by the Democrats look more desirable. But then the Democrats had to confront the severe internal strains within their party at the Democratic National Convention. Finally, with marching inexorably toward and pushing Lee into the outer defenses of Richmond, it became increasingly obvious that a Union military victory was inevitable and close at hand.

The Lincoln/Johnson ticket ran with the slogan “Don't change horses in the middle of a stream.” Republicans loyal to Lincoln, in opposition to a group of Republican dissidents who nominated , joined with a number of Democrats to form the National Union Party, to appeal to War Democrats; the new name vanished after the election. Johnson, however, never became a Republican.

The Republican/Union party made an all-out effort to depict the Democrats in the worst way possible. They ridiculed McClellan for his pacifist platform and denounced Democrats as traitorous Copperheads. On November 8, Lincoln won by over 400,000 popular votes and easily clinched an electoral majority. Several states allowed their citizens serving as soldiers in the field to cast ballots, a first in United States history. Soldiers in the Army gave Lincoln more than 70% of their vote.

Abraham Lincoln was nominated by the Republican Party, which was replaced before the 1864 election by the "National Union Party”. Lincoln's nomination was not unanimous, however, as 22 disgruntled opponents of Lincoln voted for , who was not a candidate. Seeing an opportunity to work with the under the Union banner, the convention nominated Military-Governor of Tennessee, a War Democrat, as Lincoln's running mate over incumbent Vice President and three other War Democrats - former New York Senator , Buchanan cabinet member and General Ben Butler.

The 1864 election was the first time since 1812 that a presidential election took place during a war. For much of 1864, Lincoln himself believed he had little chance of being re-elected. Early on, McClellan was thought to be a heavy favorite to win the election. But McClellan's chances of victory faded after Union victories in Georgia and Virginia, followed by the negotiated withdrawal of 's Radical Republican Party candidacy.

Only 24 states participated, because 11 had seceded from the Union and claimed to have formed their own nation: the Confederate States of America (CSA). Three new states participated for the first time: , , and . The reconstructed portions of Tennessee and Louisiana elected presidential Electors, although Congress did not count their votes.

(a) "The states in rebellion did not participate in the election of 1864."
(b) "One Elector from Nevada did not vote"
(c) "Andrew Johnson had been a Democrat, and after 1869 was a Democrat. The Republicans did not run a presidential candidate in 1864 but formed the National Union Party to accommodate the War Democrats."