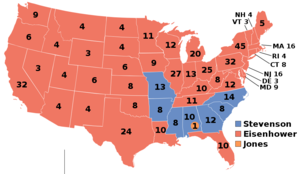 The United States presidential election of 1956 saw a popular successfully run for re-election. The 1956 election was a rematch of 1952, as Eisenhower's opponent in 1956 was Democrat , whom Eisenhower had defeated four years earlier.

Incumbent President Eisenhower was popular, but had health conditions that became a quiet issue. Stevenson remained popular with a core of liberal Democrats but held no office and had no real base. He (and Eisenhower) largely ignored the civil rights issue. Eisenhower had ended the and the nation was prosperous, so a landslide for the charismatic Eisenhower was never in doubt.

* , President of the United States from

As 1956 began there was some speculation that Eisenhower would not run for a second term, primarily due to concerns about his health. In 1955 Eisenhower had suffered a serious heart attack, and in early 1956 he underwent surgery for . However, he quickly recovered after both incidents, and after being cleared by his doctors he decided to run for a second term. Given "Ike's" enormous popularity, he was renominated with no opposition at the in .

The only question among Republicans was whether Vice-President would once again be Eisenhower's running mate. There is some evidence that Eisenhower would have preferred another, less-partisan and controversial running mate, such as Governor of Massachusetts, and according to some historians (such as ), Eisenhower privately offered Nixon another position in his cabinet, such as . However, was the only Republican to publicly oppose Nixon's renomination for Vice-President, and Nixon remained highly popular among the GOP's rank-and-file voters. Nixon had also reshaped the vice-presidency, using it as a platform to campaign for Republican state and local candidates across the country, and these candidates came to his defense. In the spring of 1956 Eisenhower publicly announced that Nixon would again be his running mate, and Stassen was forced to second Nixon's nomination at the Republican Convention. Unlike 1952, conservative Republicans (who had supported against Eisenhower in 1952) did not attempt to shape the platform. The only thing notable about the Republican Convention was that one delegate voted for a fictitious "Joe Smith" for Vice President in order to protest everything being unanimous.

Adlai Stevenson II, the Democratic Party's 1952 nominee, fought a tight primary battle with populist Senator for the 1956 nomination. Kefauver won the unopposed (though Stevenson won 15% on write-ins). After Kefauver upset Stevenson in the primary, Stevenson, realizing that he was in trouble, agreed to debate Kefauver in Florida. Stevenson and Kefauver held [http://www.ourcampaigns.com/EventDetail.html?EventID=42 the first televised presidential debate] on May 21, 1956 before the Florida primary. Stevenson carried Florida by a 52-48% margin. By the California primary in June 1956 Kefauver's campaign had run low on money and could not compete for publicity and advertising with the well-funded Stevenson. Stevenson won the California primary by a 63-37% margin, and Kefauver soon thereafter withdrew from the race.

At the in , New York , who was backed by former President , challenged Stevenson for the nomination. However, Stevenson's delegate lead was much too large for Harriman to overcome, and Stevenson won the nomination on the first ballot.

The highlight of the 1956 Democratic Convention came when Stevenson, in an effort to create excitement for the ticket, made the surprise announcement that the convention's delegates would choose his running mate. This set off a desperate scramble among several candidates to win the nomination; a good deal of the excitement of the vice-presidential race came from the fact that the candidates had only one hectic day to campaign among the delegates before the voting began. The two leading contenders were Senator Kefauver, who retained the support of his primary delegates, and young Senator of Massachusetts, who was relatively unknown at that point. Although Stevenson privately preferred Senator Kennedy to be his running mate, he did not attempt to influence the balloting for Kennedy in any way. Kennedy surprised the experts by surging into the lead on the second ballot; at one point he was only 15 votes shy of winning. However, a number of states then left their "favorite son" candidates and switched to Kefauver, giving him the victory. Kennedy then gave a gracious concession speech. The defeat was actually a boost for Kennedy's long-term presidential chances; by coming so close to defeating Kefauver he gained much favorable national publicity, yet by losing to Kefauver he avoided any blame for Stevenson's expected loss to Eisenhower in November. The vote totals in the vice presidential balloting are recorded in the following table, which also comes from Bain & Parris.

Stevenson campaigned hard against Eisenhower, with ads for the first time being the dominant medium for both sides. Because Eisenhower's 1952 election victory was due, in large part, to winning the female vote, there were a plethora of "housewife" focused ads.

Stevenson proposed significant increases in government spending for social programs and treaties with the to lower military spending and end nuclear testing on both sides. He also proposed to end the military draft and switch to an "all-volunteer" military. Eisenhower publicly opposed these ideas, even though in private he was working on a proposal to ban atmospheric nuclear testing. Eisenhower had retained the enormous personal and political popularity he had earned during the , and he maintained a comfortable lead in the polls throughout the campaign.

Eisenhower was also helped by two foreign-policy crises that developed in the weekend before the election. In Soviet-occupied , many citizens rose up in revolt against the Soviet Army; their revolt was brutally crushed within a few days by Soviet troops. In , a combined force of Israeli, British, and French troops seized the Suez Canal; Eisenhower condemned the seizure and pressured the allied forces to return the canal to Egyptian control. These two events led many Americans to rally in support of the President, thus swelling his expected margin of victory. Eisenhower had also supported the ruling in 1954; this ruling by the U.S. Supreme Court ended legal segregation in public schools. As a result, Eisenhower won the support of nearly 40% of black voters; he was the last Republican presidential candidate to receive such a level of support from black voters.

On election day Eisenhower took over 57% of the popular vote and won 41 of the 48 states. Stevenson won only six Southern states and the border state of Missouri, becoming the only losing candidate in the last 100 years to carry the Show-Me-State. Eisenhower carried , making him the first Republican presidential candidate to carry the state since Reconstruction in 1876.

(a) "Alabama , who was pledged to and , instead cast his votes for , who was a circuit court judge in Turner's home town, and , governor of the neighboring state of Georgia."

Because of the admission of Alaska and Hawaii as states in 1959, the 1956 presidential election was the last in which there were 531 electoral votes.

*Missouri is often considered to be a 'bellwether' state because it has voted for the winner of every Presidential election for the past century. 1956 is the only exception as it voted for Stevenson (by only 4,000 votes out of more than 1.8 million cast; most of this margin was provided by the City of St. Louis).

*Eisenhower came in third in South Carolina, behind Stevenson and "unpledged electors", the first incumbent to have this status since in 1912. It happened next to George Bush in 1992 when he finished third place in behind and .

*As of 2008, the 1956 Democratic vice presidential vote was the last time any convention voting went to a second ballot