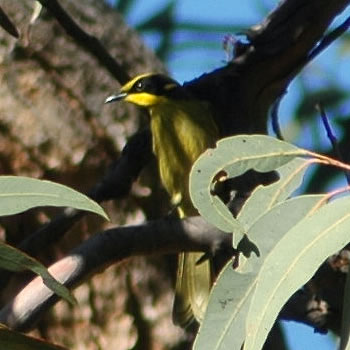 The Yellow-tufted Honeyeater "(Lichenostomus melanops)" is a bird found in the south-east ranges of from south-east through eastern and across Victoria into the tip of Southeastern . A predominantly black and yellow honeyeater, it is split into three subspecies.

It was initially described by ornithologist John Latham in 1802 and given several names, initially "Muscicapa auricomis" and later "Turdus melanops". [Latham, J. (1802). "Supplementum Indicis Ornithologici, sive Systematis Ornithologiae." London: G. Leigh, J. & S. Sotheby 74 pp.] The latter name was retained as a "" and the former a "" as the epithet "melanops" has been used consistently for over a century. It belongs to the family Meliphagidae. More recently, analysis has shown honeyeaters to be related to the , and the (Australian robins) in a large corvid superfamily; some researchers considering all these families in a broadly defined .

It is 17-23 cm long, with females usually smaller, and has a bright yellow forehead, crown and throat, a black mask and a yellow ear and forehead tuft. The back is olive-green and underparts more olive-yellow.

Four races are distinguished:
*"L.m. cassidix": "(Endangered)" Known as the Helmeted Honeyeater, and initially described by as a separate species "Ptilotis cassidix" in 1867. [Gould, J. (1867). "The Birds of Australia. Supplement." London: J. Gould Pt 4 81 pls pp. [pl. 39] ] This race is restricted to a five km length of remnant bushland along two streams in the , 50 km east of in Victoria. It is the brightest and largest (weight 28 - 32 g) subspecies. In 2003 there were 103 individuals in the wild with 20 breeding pairs known as well as a further 34 birds in captivity at the .

Yellow-tufted Honeyeaters, as a species, are not listed as threatened on the Australian or on any state-based legislation. However, at the subspecies level, the Helmeted Honeyeater ("L. m. cassidix") is considered to be a threatened species:
* This subspecies is listed as endangered on the Australian .
* This subspecies is listed as threatened on the Victorian . [ [http://www.dse.vic.gov.au/DSE/nrenpa.nsf/LinkView/EADA0F1874AF9CF24A2567C1001020A388BBA5581CF9D859CA256BB300271BDB Department of Sustainability and Environment, Victoria] ] Under this Act, an "Action Statement" for the recovery and future management of this species has been prepared. [ [http://www.dse.vic.gov.au/DSE/nrenpa.nsf/LinkView/617768308BCB666E4A25684E00192281E7A24BB36FF60A144A256DEA00244294 Department of Sustainability and Environment, Victoria] ]

* On the 2007 advisory list of threatened vertebrate fauna in Victoria, the Helmeted Honeyeater is listed as .

Food includes lerps and other invertebrates, as well as nectar from eucalypts and other flowers.