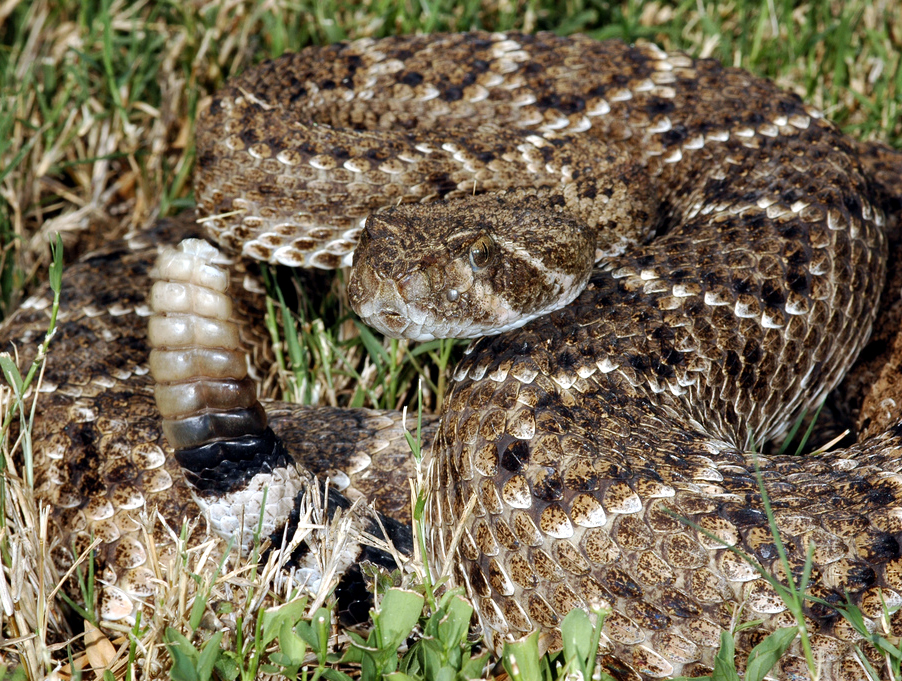 Rattlesnakes are a group of venomous , genera "" and "". They belong to the class of venomous snakes known commonly as pit vipers. Rattlesnakes are characterized by the presence of a "rattle" at the tip of the tail used to warn off predators and threats.

There are approximately fifty species of rattlesnake, with numerous subspecies. They receive their name for the located at the tip of their tails. The rattle is used as a warning device when threatened. The scientific name "Crotalus" derives from the Greek, "κρόταλον", meaning "". The name "Sistrurus" is the Latinized form of the Greek word for "tail rattler" ("Σείστρουρος, Seistrouros") and shares its root with the ancient ian musical instrument, the , a type of rattle. Rattlesnakes are also endangered because of humans killing them. Most rattlesnakes mate in the spring. All species give , rather than laying eggs. The young are self-sufficient from birth. As they do not need their mother after birth, the mother does not remain with her young.

Rattlesnakes consume rodents and other small animals, such as rabbits, rats, and mice, subduing their prey quickly with a venomous bite as opposed to constricting. Rattlesnakes have also been known to eat small mammals, like foxes, cats or dogs.Fact|date=July 2008 The venom stuns or kills typical rattlesnake prey immediately. A rattlesnake will follow prey that does not quickly succumb to the venom and attempts to escape. They are specially known to strike at distances up to two-thirds their body length.

Rattlesnakes are prey for s, roadrunners, s, [http://www.1911encyclopedia.org/Rattlesnake] s, and s. They have been harvested as human food, such as at the in .

Although many kinds of snakes are (lay eggs), rattlesnakes are -- the female retains the eggs in her body until they hatch and the young emerge alive. Baby snakes are ready to go as soon as they are hatched or born. There is little to no parental care of the newborn snakes.

ing. If the rattle absorbs enough water in wet weather, it will not make noise.

Different species of rattlesnake vary significantly in size, territory, markings, and temperament. If the rattlesnake is not cornered or imminently threatened, it will usually attempt to flee from encounters with humans, but will not always do so. Bites often occur when humans startle the snake or provoke it. Those bitten while provoking rattlesnakes have usually underestimated the range (roughly two-thirds of its total length) and speed with which a coiled snake can strike (literally faster than the human eye can follow). This can be particularly surprising since the snakes can strike without pulling their body back. This reflex hasn't been recorded in any other species. Heavy boots and long pants reinforced with leather or canvas are recommended for hikers in areas known to harbor rattlesnakes.

Guides are available through booksellers, libraries, and local conservation and wildlife management agencies that aid hikers and campers in identifying rattlesnakes. The advice given is to avoid contact with rattlesnakes by remaining observant and not approaching the animals. Hikers are advised to be particularly careful when negotiating fallen logs or boulders and when near rocky outcroppings and ledges where rattlesnakes may be hiding or sunning themselves. However, snakes will occasionally sun themselves in the middle of a trail, so such areas are not the only places where they are encountered. When encountering a rattlesnake on a trail, you are advised to keep your distance and allow the snake room to retreat.

Rattlesnakes are born with fully functioning fangs capable of injecting venom and can regulate the amount of venom they inject when biting. Generally they deliver a full dose of venom to their prey, but may deliver less venom or none at all when biting defensively. A frightened or injured snake may not exercise such control. Young snakes are to be considered more dangerous, as they have less control over the amount of venom they inject. A young rattlesnake will often simply inject all its venom, which is a deadly amount.Fact|date=August 2008

Most species of rattlesnakes have hemotoxic venom, destroying tissue, degenerating organs and causing (disrupted blood clotting). Some degree of permanent scarring is very likely in the event of a venomous bite, even with prompt, effective treatment, and a severe , combined with delayed or ineffective treatment, can lead to the loss of a limb and, rarely, death. Thus, a rattlesnake bite is always a potentially serious or even fatal injury. Untreated rattlesnake bites, especially from larger species, are sometimes fatal. However, , when applied in time, reduces the death rate to less than 4%. Around 8,000 people are bitten by venomous snakes in the United States each year [http://www.aphis.usda.gov/mrpbs/safety_security/library/snake_bites.pdf] . On average, fewer than 15 snakebite deaths are reported.

Some rattlesnakes, especially the tropical species, have neurotoxic venom. A bite from these snakes can interfere with the function of the heart, paralyze the lungs, and shut down parts of the nervous system.

The Common ("Lampropeltis getula"), a , is famous for being largely to the venom of rattlesnakes and other s, [ [http://www.desertusa.com/magfeb98/feb_pap/du_kingsnake.html Common Kingsnake (DesertUSA) ] ] and therefore rattlesnakes form part of this snake's natural diet in the wild.

When a bite occurs, the amount of venom injected cannot be gauged easily. Symptoms and swelling may occur quickly, and may cause death easily but in some cases hours may pass before serious effects appear.

Experienced health workers typically gauge envenomation in stages ranging from 0, when there is no evident venom, to 5, when there is a life-threatening amount of venom present. The stages reflect the amount of bruising and swelling around the fang marks and the speed with which that bruising and swelling progresses. In more severe envenomation cases (stage 4 or 5) there may also be proximal symptoms, such as lip-tingling, dizziness, bleeding, vomiting, or shock. Difficulty breathing, paralysis, drooling, and massive haemorrhaging are also common symptoms.

Quick medical attention is critical, and treatment typically requires antivenin/antivenom to block the tissue destruction, nerve effects, and blood-clotting disorders common with rattlesnake venom. Most medical experts recommend keeping the area of the bite below the level of the heart. It is important to keep a snake bite victim calm in order to avoid elevating their heart rate and accelerating the circulation of venom within the body. Untrained individuals should not attempt to make incisions at or around bite sites, or to use tourniquets, as either treatment may be more destructive than the envenomation itself.

Any bite from a rattlesnake should be regarded as a life-threatening that requires immediate hospital treatment from trained professionals.

Rattlesnakes are also a popular food in some southeastern and southwestern American cuisines and are sometimes sold in speciality meat shops. It has a flavor that has been described as similar to chicken or frog legs and a chewy texture similar to alligator. [http://www.rattlesnakerecipe.us/]

There are fairly obvious risks with private ownership of rattlesnakes. A bite can cause death or permanent disability. Even a nonfatal bite can lead to very high costs for emergency medical care. [http://www.venomousreptiles.org/articles/305] Some jurisdictions outlaw the possession of venomous snakes; where it is legal, some form of license or insurance policy may be required.