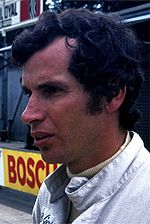 In circuit racing, be became very successful in the early 1970s for Ford: