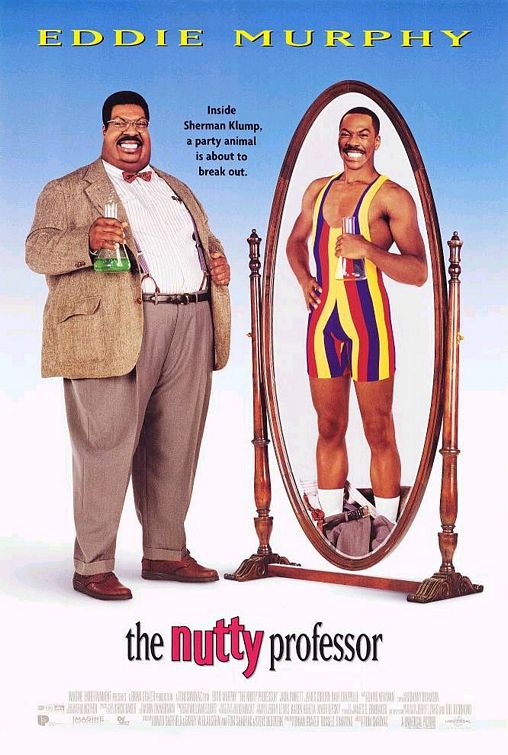 "The Nutty Professor" is a 1996 - romantic comedy film starring . It is a of the 1963 film of the same name starring . The original music score was composed by .

Murphy plays benevolent university professor who suffers from severe . He invents a miracle potion and, hoping to win the girl of his dreams, tries it on himself. Social situations demand that he call himself by a different name while he is using the potion, and his slim self becomes an independent personality. Like the original film's Julius Kelp, Klump's trim and stylish, but arrogant, alter ego is also named Buddy Love. Murphy plays a total of seven characters in the film, including Sherman, most of Sherman's family (except for Sherman's nephew, Ernie "Hercules" Klump Jr.) and an over-the-top parody of .

The film co-stars , John Ales, , Larry Miller and a then little-known . Singer has a cameo role as himself.

The film's theme song is Macho Man by .

The film opens with an exercise show hosted by Lance Perkins (Murphy) on TV and we see Professor Sherman Klump (also Murphy) getting ready for school. Meanwhile, are overrunning Wellman College and causing general chaos. It turns out that these are the school's laboratory hamsters that 400-pound Sherman accidentally released the night before. The problem contained, Sherman is given an update by his assistant Jason (Ales) about their latest project &ndash; an experimental formula that reconstructs the DNA of an obese person to make weight loss easy. It seems that their fattest hamster, Shelley, has lost 3 ounces, proving that the serum works. Jason suggests increasing the amount Shelley is fed, but the ever-kindly Sherman argues against it, saying it could be dangerous.

He then has an unpleasant meeting with Dean Richmond (Miller). The Dean tells him that the incident with the hamsters has cost the science department most of its funding. Harlan Hartley (Coburn) is the school's last remaining wealthy alumnus and is planning to award a $10 million grant to the college, and Klump is warned not to alienate him as well.

After class, Sherman meets the lovely Miss Carla Purty (Pinkett), a chemistry grad student teaching a class across the hall who is a big fan of his work, and falls instantly in love with her. Later that night, Sherman dines with his portly family (most of whom are also played by Murphy), and argues with them about obesity. Cletus, his carnivorous father, starts his habit of farting randomly. Treating this disgraceful procedure religiously, he breaks wind to the point where he has soiled himself (6 times). Sherman is hurt by the comments his father, Cletus, makes, but Sherman's mother, Anna, tells him that he is "beautiful inside and out".

This inspires Sherman to invite Carla on a date to "The Scream", a local and eatery. On his way home from her house, Sherman dances to ' "Close the Door" and sings in glee:

"Yes, that would be so great,"

"And I can hardly wait!"

While watching Lance Perkins on TV giving one his speeches of motivation, Sherman falls asleep and dreams he is making out with Carla on a beach but she gets burried into the sand by Sherman's weight, Sherman awakes to Lance telling the viewers to get up and tell themselves "Yes I Can!", which Sherman does. Now Sherman is motivated and full of energy and is determined to lose some weight. A ""-style montage ensues, showing Sherman trying various methods to get fit before the big date. However, although the date begins well, with Carla showing great admiration for Sherman's work with Shelley, it turns into a disaster when Sherman falls victim to the evening's star , an insult comic called Reggie Warrington (Chappelle), who humiliates him with cruel jokes about his huge . Back at Carla's home, with tears in his eyes, Sherman says goodbye to his date.

Later that night, alone and depressed in his apartment, Sherman stuffs himself with junk food while watching Lance console a fat woman who tells a sad story about how a man asked her out as an excuse to make fun of her obesity. Sherman dozes off in front of the TV set, and has a nightmare in which he becomes the fattest man in the world and lays waste to the city with a single fart which is lit on fire accidentally. When he wakes, he finally yields to the temptation to try his new serum on himself. It seems to work perfectly: in seconds, he loses 250 pounds and becomes slim and fit. With his new body, Sherman also developes a split personality as well.

The following day, while still slim, he starts to flirt with Carla, who comes to the lab looking for Sherman. Quickly inventing the name "Buddy Love" for his new , based on a security guard saying "Hey, buddy, what the hell happened here?", although 'Love' is his own contribution, he invites Carla back to The Scream. However, the serum then begins to wear off, one hand bulking up and his voice returning to normal, and he ushers Carla out. Carla later tells Sherman about Buddy, and Sherman encourages her to go out with him. At The Scream, Buddy turns up very late in a brand new and persuades an angry Carla (who is about to leave) to go back inside. This time, when Reggie appears, Buddy heckles him mercilessly, fires off a barrage of jokes about his mother's weight, and finally takes the stage himself, throwing the comedian into a piano.

Buddy returns to Carla, who is delighted with him. He gives a a to pay for the meal. Buddy and Carla then share a . Immediately after, the serum begins to wear off and Buddy makes a quick exit. Jason happens to be at the bar and notes the card Buddy is using belongs to Sherman. He follows Buddy into the sports car to confront him, only to learn Sherman's secret when he discovers him in mid-transformation.

The next morning, Sherman is very late for a class, and his students have all left. The Dean, however, is there, and he confronts Sherman about the sports car, which Buddy bought on Sherman's faculty account. The Dean threatens to strangle Sherman if he screws up again and asks him to meet Hartley at a to describe the weight-loss serum.

Later, in the lab, Jason tells Sherman that he can't control Buddy, whose levels keep rising, using his out-of-character attitude as Buddy as an example. He warns him not to use the serum again and to focus instead on the for Hartley. Later, Carla talks to Sherman about her date with Buddy, and Sherman takes the opportunity to ask Carla to with his family, who promptly embarrass him by making various suggestive comments about their relationship and Cletus farts again. His confidence low, and after Carla mentions that she would like the opportunity to get to know the caring person she sometimes sees in Buddy's eyes, he uses the serum again. Jason tries to stop Buddy, soon Sherman tries to communicate to Jason from deep down inside Buddy and instructs Jason to go into the storage closet to get an antidote but the muscled regains control and locks Jason in before departing.

Buddy, who is becoming ever more aggressive, takes Carla out on a second date, this time to the hotel where Sherman was to meet Hartley. The Dean, looking for Sherman, asks Carla if she knows where Sherman is, but Carla asks Buddy if he could take Sherman's place. With the Dean desperate to get the grant, he allows Buddy to talk to Hartley, Buddy subsequently taking all the credit for the work. Hartley and the Dean are both impressed, the Dean later asking if Buddy would be willing to fill in for Sherman on a more permanent basis.

Buddy then picks up three beautiful woman, and invites Carla to participate in some "group action." She promptly dumps him. Undaunted, he throws a at Sherman's house that night, burning all the products in Sherman's . Sherman, having transformed back during the night, wakes in a wrecked apartment surrounded by strange women, with no of the night before. Carla arrives to tell Sherman that she's left Buddy, as well as to apologise about her encouraging Buddy to talk to Hartley, but then sees one of Buddy's women. Thinking Sherman is as unfaithful as Buddy, she leaves in disgust. Jason then rushes in, telling Sherman to come to the quickly.

When he arrives, he discovers that Buddy has been given his job and his ticket to the alumni ball. At home, depressed, Sherman accidentally activates the , where Buddy has left a message taunting Sherman and encouraging him to take the serum once again. This inspires Sherman to take his life back, resolved to prove that he can defeat Buddy. He and Jason start destroying all the serum samples, but when he sips a diet drink that Buddy has craftily filled with the serum, he transforms again. Buddy, who has "taken on a life of his own" with a vengeance, tells Jason that if he drinks 500 mL of the serum, he will have enough cellular stability to be thin forever, thus "killing" Sherman; however, he cannot drink all of that serum at once, so he intends to drink half of it now and drink the rest later.

Buddy knocks Jason out and goes to the alumni ball, where he intends to drink the last of the serum and permanently eliminate Sherman, simultaneously proving the validity of his research. Jason, regaining consciousness, sees that the testosterone levels in Buddy are at dangerous levels and rushes off after him. At the ball, Buddy gets up on stage and demonstrates the effects of the serum to the amazed audience (which includes the Dean, Carla, Hartley, and Sherman's parents). Then, as he prepares to drink the second dose of serum to stay Buddy Love forever, Jason runs in, and tries to stop him. Buddy punches Jason, but Jason hits back.

As Buddy stands poised to return a blow, Sherman starts to "fight" him for control of his body: fat and thin body parts alternate with increasing speed while Buddy's voice shouts "You can't beat me!" and Sherman's voice replies "Yes I can!". Eventually, after a violent transformation/confrontation, Sherman wins the struggle. Still on stage, he tells the awed alumni that what he did was selfish and foolish, and that he has learned to accept himself as he is, rather than being unhappy about how much he weighs. He leaves, but Carla stops him and asks why did he lie. He explains that he did not believe that she would accept him and she assures him that it doesn't matter if he is overweight or not. Carla asks him to dance and he agrees yes but Jason arrives with a tuxedo that fits. The two subsequently dancing for the rest of the night, much to the approval of Jason and Sherman's family. Harley then tells the Dean that he's decided to give Sherman the grant because he's "a brilliant scientist, and a gentleman". s are then shown through the first part of the .

* The first movie to feature outtakes over the closing credits. See also "" and "".
* This film is number 70 on Bravo's "100 Funniest Movies".
* The film also features a series of scenes with Murphy and comedian who plays insult comic Reggie Warrington. Much of their dialogue was improvised. Murphy was one of Chappelle's biggest comedic influences.