State Route 57 (SR 57), also known as the Orange Freeway, is a north–south state highway in the Greater Los Angeles Area of the U.S. state of California. It connects the interchange of Interstate 5 and State Route 22 near downtown Orange, locally known as the Orange Crush, with the Glendora Curve interchange with Interstate 210 and State Route 210 in Glendora. The highway provides a route across several spurs of the Peninsular Ranges, linking the Los Angeles Basin with the Pomona Valley and San Gabriel Valley.

A predecessor to this road ran through Brea Canyon by the early 20th Century, and was added to the state highway system. The freeway was built in stages during the 1950s, one of which included the Brea Canyon Freeway. The portion of the Orange Freeway that remained unconstructed was not completed until the early 1970s. The latest piece of SR 57 to be added was formerly part of I-210, after SR 210 was extended to San Bernardino. An unconstructed extension from Santa Ana south to Huntington Beach remains in the legal definition of Route 57, and has been studied, most recently as a toll road above the Santa Ana River. 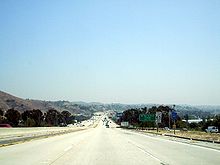 SR 57 is eligible for the State Scenic Highway System through Brea Canyon, between SR 90 and SR 60,[2] though it has not officially been designated by Caltrans as such.[3] The entire route is in the California Freeway and Expressway System,[4] and is a freeway where built.

SR 57 begins at the Orange Crush interchange near downtown Orange, where it meets the northwest-southeast Santa Ana Freeway (Interstate 5) and the east–west Garden Grove Freeway (SR 22). The Orange Crush interchange, long considered a major bottleneck, was rebuilt in the 1990s and 2000s.[5][6] The freeway heads north from the junction and soon crosses to the west side of the Santa Ana River, continuing north through suburban portions of Anaheim, passing next to Angel Stadium and the Honda Center. In northern Anaheim, SR 57 meets the Riverside Freeway (SR 91). SR 57 briefly passes through Placentia and Fullerton, providing access to California State University Fullerton. As it crosses Imperial Highway (SR 90) near the Brea Mall and enters Brea, SR 57 enters more rugged terrain, soon climbing through Brea Canyon, the gap between the Chino Hills and Puente Hills. Near its summit, the highway curves north out of the Brea Canyon, and descends slightly to a junction with the Pomona Freeway (SR 60) in Diamond Bar, right on the edge of the San Gabriel Valley.[7]

A short overlap carries SR 57 traffic on the outside of SR 60. The two routes head northeast through an arm of the San Gabriel Valley; after they split, SR 57 ascends slightly and then descends through the edge of the Puente Hills and into the west end of the Pomona Valley. Here it meets the San Bernardino Freeway (Interstate 10) and Chino Valley Freeway (SR 71) at the four-level Kellogg Hill Interchange. In the north half of that interchange, SR 57 enters the San Jose Hills, climbing to its highest elevation before descending back into the connected San Gabriel-Pomona Valleys and ending at the Glendora Curve interchange with the Foothill Freeway (Interstate 210) in Glendora.[7]

High-occupancy vehicle (HOV) lanes exist in the median of SR 57 south of SR 60 in Diamond Bar. Elevated ramps allow HOV traffic bound to or from Brea Canyon to connect with Interstate 5 towards the southeast, SR 91 towards the west, or SR 60 towards the east without entering the main lanes.[7][8]

The road through Brea Canyon was oiled dirt by the late 1910s, providing a good connection across a spur of the Peninsular Ranges between the Los Angeles Basin and Pomona Valley. This road left the main coast highway (Harbor Boulevard) at Fullerton and followed the present Brea Boulevard and Brea Canyon Road, merging with the Valley Boulevard from Los Angeles near Walnut and continuing east to Pomona via Valley and Pomona Boulevards.[9] Los Angeles County paved the road in concrete in early 1923,[10] and in 1931 it was added to the state highway system as a branch of Route 19. Until then, Route 19 had connected Route 9 near Claremont with Riverside, following Garey Avenue and Mission Boulevard through Pomona.[11][12]

The state built a bypass of the Valley Boulevard portion of the route in the early-to-mid 1930s, leaving the old road near Diamond Bar and heading northeast through the foothills, along the present freeway alignment and Mission Boulevard.[13] To the south, the legislature added then-unrelated Route 180 along State College Boulevard in 1933, connecting Route 2 (Interstate 5) near the Santa Ana River with Route 175 (Orangethorpe Avenue, later replaced by SR 91) near Placentia.[14][15] By 1955, the Brea Canyon Freeway was proposed to begin at the Santa Ana Freeway (I-5) near La Veta Avenue in Santa Ana and head north, paralleling Routes 180 and 19 to Pomona.[16][17][18] (The portion northeast of Diamond Bar into Pomona soon became part of the planned Pomona Freeway, and the name of the remainder was changed to Orange Freeway.[19]) The state legislature changed the definition of Route 19 to reflect this in 1957 by moving its south end to Santa Ana.[20]

Also in 1957, the northernmost part of present SR 57 was added to the state highway system as part of Route 240, which the legislature designated along the route planned for Interstate 210.[21] This became part of the proposed Temescal Freeway (later Corona Freeway); a southerly extension of the Orange Freeway[19] to Legislative Route 60 (State Route 1) near Huntington Beach was added in 1959 as Route 273. Also in 1959, the legislature created Route 272, extending the line of the Orange Freeway north from the Pomona Freeway to the Temescal Freeway, completing the proposed freeway corridor that is now SR 57.[22] At the time of the 1964 renumbering, when the entire route (except Route 240, which was still part of I-210) was redesignated Route 57, none of these proposed freeways had been built; the only constructed portion was the old surface road from Fullerton towards Pomona.[23] (The portion of old Route 19 east of Route 272 became part of State Route 60.) As part of the same renumbering, Route 180 on State College Boulevard became Route 250,[24] which was amended the next year to provide for its deletion once that portion of the SR 57 freeway was completed (between Interstate 5 and State Route 91).[25]

A groundbreaking ceremony was held in Placentia on January 30, 1967, to begin construction of the Orange Freeway.[26] The first portion was dedicated on May 16, 1969 and opened soon after, extending north from the Riverside Freeway (State Route 91) to Nutwood Avenue.[27] Over the next few years, the freeway was completed from State Route 91 north to Interstate 10, and Interstate 210 was built north to the present end of SR 57; the Pomona Freeway (State Route 60), which overlaps it through Diamond Bar, was constructed at the same time.[28] The last pieces of that portion were through Brea Canyon, opened March 13, 1972,[29] and the four-level Kellogg Hill Interchange at I-10, dedicated May 1, 1972 and opened soon after.[30] Finally, the Orange Freeway was extended south from State Route 91 to Interstate 5 in the mid-1970s,[28] allowing Route 250 to be turned back to local governments (though the subsequent deletion from the Streets and Highways Code did not take place until 1981[31]). With the extension of Route 210 around San Bernardino in 1998, the former easternmost piece of Interstate 210 to the Kellogg Hill Interchange instead became a northerly extension of SR 57,[32] though it remains officially part of the Interstate Highway System.[33]

The southerly extension to Huntington Beach remains unconstructed. The most recent plans were for a toll road elevated above the Santa Ana River rather than through existing neighborhoods, only extending south to the San Diego Freeway (Interstate 405) in Costa Mesa with connections to the Corona del Mar Freeway (State Route 73).[34][35] The extension was most recently considered as two 11.2-mile-long (18.0 km), two-lane viaducts, costing $950 million; the toll road franchise expired in January 2001.[36]

In April 2009, the Orange County Transportation Authority continued to study the extension of SR 57, where the freeway would travel along the Santa Ana River and terminate at I-405 in Fountain Valley.[37]

Note: Except where prefixed with a letter, postmiles were measured in 1964, based on the alignment as it existed at that time, and do not necessarily reflect current mileage. The numbers reset at county lines; the start and end postmiles in each county are given in the county column.