The Panthéon (Latin Pantheon,[1] from Greek Pantheon, meaning "Temple of all the Gods") is a building in the northern edge of the old town of Caracas, Venezuela. It was originally built as a church, but is now used as a famous burial place. The entire central nave is dedicated to Simón Bolívar, with the altar's place taken by the hero's bronze sarcophagus, while lesser luminaries are relegated to the aisles. The national pantheon's vault is covered with 1930s paintings depicting scenes from Bolívar's life, and the huge crystal chandelier glittering overhead was installed in 1883 on the centennial of his birth. 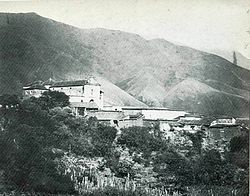 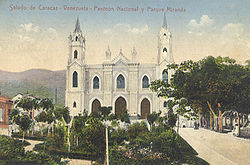 Old facade of the National Pantheon, 1912

On 27 March 1874, president Antonio Guzmán Blanco decreed the transformation of the Santísima Trinidad church of Caracas into a National Pantheon, to conserve the remains of the heroes of Independence and those of eminent people. This church was constructed by Juan Domingo del Sacramento Infante in the middle of the 17'th century, the 1812 earthquake destroyed it almost totally, its slow reconstruction continued under the direction of several engineers and when was decree as Pantheon, it was still not finished.

The choice of this temple for so lofty a destiny was motivated as much by its then-panoramic and distant position from the urban nucleus of Caracas, as by its historical antecedents, during the return of Simón Bolívar's remains from Santa Marta in 1842, they were deposited temporarily at this church. In the church were also buried, in 1851, the remains of Francisco Rodríguez del Toro (Marqués del Toro), those of José Gregorio Monagas, Andrés Ibarra and Ezequiel Zamora. The decree of Guzmán Blanco was accompanied with the order of the completion of its facades, being finished the project made by engineer José Gregorio Solano during 1853-1858. It was the first design of neogothic architecture in Venezuela, consisted of a symmetrical facade of three doors and two angular towers. The works were led, successively, by the engineers Julian Churión, Juan Hurtado Manrique, Tomás Soriano and Roberto García, finishing on 28 October 1875. Nevertheless, the inauguration of the building occurred during St. Simon's day, when the remains of the Liberator were transferred from the cathedral. These were placed in a wooden sarcophagus with silver and gold coating, made in a neogothic style by the French engraver Emile Jacquin. The statue of the Liberator executed in 1842 by the Italian sculptor Pietro Tenerani was also transferred from the cathedral. The sarcophagus and the statue were placed in the space that was used by the priest of the church. From the ceiling, a crystal chandelier from Bacarat with 230 lights was hung. In 1910, the government of Juan Vicente Gómez undertook a general renovation of the building, following the plans of architect Alejandro Chataing. Some changes to the facade were introduced, and the inner decoration was modified, placing a sky-light in the ceiling of the nave.

The floor was paved with white, gray and black marble slabs. These works were finished in 1911, on the occasion of the centenary of Independence.

Another redesign of the Pantheon was ordered during Gómez government in 1929, according to the plans of architect Manuel Mujica Millán. This consisted of a radical change in the facades to a neocolonial and neobaroque design, adding in the front a third central tower 48 m high and replacing the lateral ones by others, all constructed of reinforced concrete. Also a new porch with a single entrance was added. The height of the lateral facades was increased, opening the windows in harmony with the internal chapels. Also, the entrance stairs were extended and made the more monumental. These works, which gave the building its present aspect, were undertaken during the year 1930 under the direction of Mujica and the engineers Edgar Pardo, Hernán Ayala and Guillermo Salas. Internally, corrections were made in the arches and the columns. The old wooden sarcophagus that contained the remains of El Libertador was replaced by one of bronze, designed by Spanish sculptor Chicharro Gamo and placed on a marble plinth. The previous marble pavement was replaced, the wooden ceilings were also replaced. The upper part of the nave and of the arches were covered by paintings with allegorical and historical subjects by painter Tito Salas. 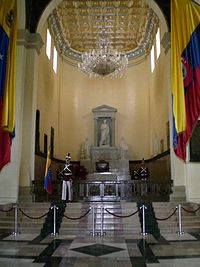 Bolívar´s tomb at the National Pantheon 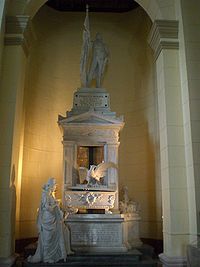 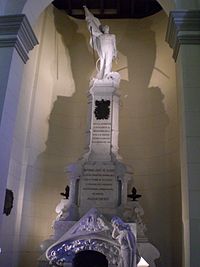 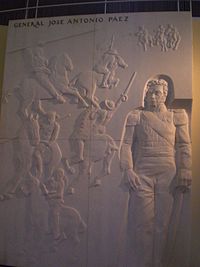 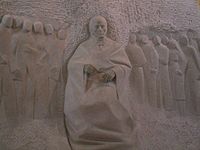 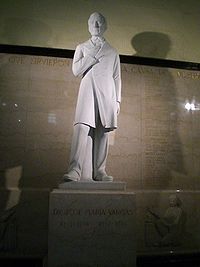 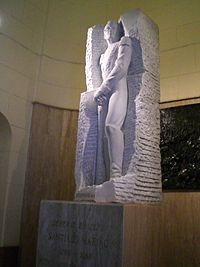 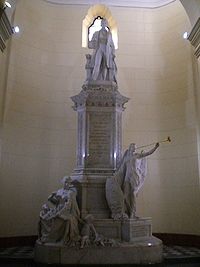 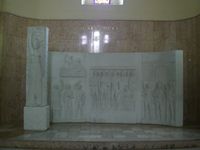 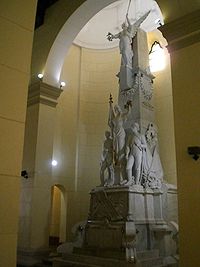 Inside the Pantheon, on both sides of the main recess that contains the tomb and monument to the Liberator, there are the statues of Francisco de Miranda and Antonio José de Sucre, respectively. Along the whole of the side walls, there are monuments dedicated to the First Republic, José Gregorio Monagas, Andrés Bello, José Antonio Páez, Rafael Urdaneta and José María Vargas and other important Venezuelan people. Under the pavement, in the two side caissons the remains of famous and illustrious Venezuelans are placed, labelled by tablets.

In 1963 the government decreed a regulation, establishing that the building must be opened to the public every day of the year. At the same time, the administration of the graves and other procedures are responsibility of the Ministry of Interior. In 1980, city-planning works to remodel the surroundings of the Pantheon were initiated in accordance with the study of architect Tomás Sanabria.

List of personalities who are buried at the Pantheon

The following personalities in the preceding list are not buried in the Pantheon because their remains have not been found, but it has been decreed by the Venezuelan authorities they should be[2]:

The following person is not buried in the Pantheon but an empty tomb is kept there, next to Simon Bolivar's in the hopes that his remains will return to his homeland: 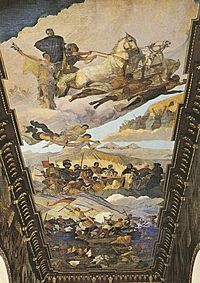 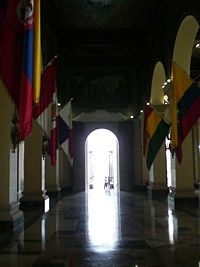 Entrance of the National Pantheon