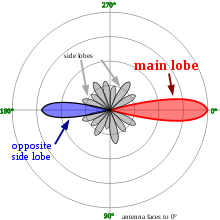 The main lobe, or main beam, of an antenna radiation pattern is the lobe containing the maximum power. This is the lobe that exhibits the greatest field strength.

The radiation pattern of most antennas shows a pattern of "lobes" at various angles, directions where the radiated signal strength reaches a maximum, separated by "nulls", angles at which the radiation falls to zero. In a directional antenna in which the objective is to emit the radio waves in one direction, the lobe in that direction is designed to be bigger than the others; this is the main lobe. The other lobes are called "sidelobes", and usually represent unwanted radiation in undesired directions. The sidelobe in the opposite direction from the main lobe is called the "backlobe".