The company's two principal divisions are the New York Mercantile Exchange and Commodity Exchange, Inc (COMEX), once separately owned exchanges. NYMEX Holdings, Inc., the former parent company of the New York Mercantile Exchange and COMEX, became listed on the New York Stock Exchange on November 17, 2006, under the ticker symbol NMX. On March 17, 2008, Chicago based CME Group signed a definitive agreement to acquire NYMEX Holdings, Inc. for $11.2 billion in cash and stock and the takeover was completed in August 2008. Both NYMEX and COMEX now operate as designated contract markets (DCM) of the CME Group.[1] The other two designated contract markets in the CME Group are the Chicago Mercantile Exchange and the Chicago Board of Trade.

The New York Mercantile Exchange handles billions of dollars worth of energy products, metals, and other commodities being bought and sold on the trading floor and the overnight electronic trading computer systems for future delivery. The prices quoted for transactions on the exchange are the basis for prices that people pay for various commodities throughout the world.

Although mostly electronic since 2006, the NYMEX maintains a small venue that still practices the open outcry trading system, in which traders employ shouting and complex hand gestures on the physical trading floor. A project to preserve the hand signals used at NYMEX has been published.[2]

628 Broadway between Bleecker and Houston Streets, built in 1882 and designed by H.J. Schwarzmann[3] 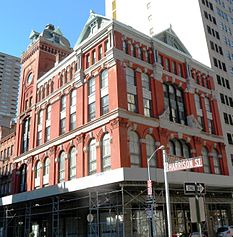 Commodity exchanges began in the middle of the 19th century, when businessmen began organizing market forums to make buying and selling of commodities easier. These marketplaces provided a place for buyers and sellers to set the quality, standards, and establish rules of business. By the late 19th century about 1,600 marketplaces had sprung up at ports and railroad stations. In 1872, a group of Manhattan dairy merchants got together and created the Butter and Cheese Exchange of New York. Soon, egg trade became part of the business conducted on the exchange and the name was modified to the Butter, Cheese, and Egg Exchange. In 1882, the name finally changed to the New York Mercantile Exchange when opening trade to dried fruits, canned goods, and poultry.

As centralized warehouses were built into principal market centers such as New York and Chicago in the early 20th century, exchanges in smaller cities began to disappear giving more business to the exchanges such as the NYMEX in bigger cities. In 1933, the COMEX was established through the merger of four smaller exchanges; the National Metal Exchange, the Rubber Exchange of New York, the National Raw Silk Exchange, and the New York Hide Exchange. In the 1970s, COMEX, NYMEX, and other exchanges shared a single trading floor[5] in 4 World Trade Center.

For years, the NYMEX traders had done a large business trading futures of the Maine Potato crop. According to Leah McGrath Goodman's 2011 book The Asylum[6], manipulation in this market was commonplace, performed by various parties including potato inspectors and NYMEX traders. The worst incident was the 1970s potato bust, when Idaho potato magnate J. R. Simplot allegedly went short in huge numbers, leaving a large amount of contracts unsettled at the expiration date, resulting in a large number of defaulted delivery contracts. A public outcry followed, and the newly created Commodity Futures Trading Commission held hearings. NYMEX was barred from trading not only potatoes futures, but from entering new areas it hadn't traded in before. NYMEX's reputation was severely damaged, because, as future chairman Michel Marks told Goodman in her book, "The essence of an exchange is the sanctity of it's contract". [7]

After the potato ban, NYMEX's existence was in doubt. Most of the trading volume had been in potatoes. Without a good commodity, the traders had trouble making money. Eventually the new chairman, Michel Marks (son of commodities icon Francis Q Marks), along with economist Arnold Safer, figured out that NYMEX could revamp an old heating oil futures contract. When the government deregulated heating oil, the contract had a chance of becoming a good object of trade on the floor. A new futures contract was carefully drawn up and trading began on a tiny scale in 1978. Some of the first users of NYMEX heating oil deliveries were small scale suppliers of people in the Northern United States. [8]

The energy trading business took off, and NYMEX boomed. The open outcry floor became a cacophony of shouting traders and pit cards. The 1980s film Trading Places used NYMEX as a setting, with actual NYMEX people as extras. The pits became a place where many people without much education or ability to fit in to Wall Street could have a chance at being rich. Many traders and executives became millionaires. They threw lavish parties and went on exotic vacations. Many of these people also became heavily involved in drugs and prostitution, with drugs being traded right on the floor of the exchange. Goodman's book tells the stories of many of the personalities that built the exchange in this era.[6]

COMEX (Commodity Exchange, Inc), one of the exchanges that shared 4 World Trade Center with NYMEX, had traditionally looked down on NYMEX for being smaller and for having the toxic reputation from the potato bust. With NYMEX's energy trading boom, it became much larger and wealtheir than COMEX. On August 3, 1994, the NYMEX and COMEX finally merged under the NYMEX name. By the late 1990s, there were more people working on the NYMEX floor than there was space for them. In 1997, the NYMEX moved to a new building on the Southwestern portion of Manhattan, part of a complex called the World Financial Center.[10][11][12][13][6]

NYMEX maintained a close relationship with many organizations and people at World Trade Center, and several NYMEX people were lost in the tragedy, even though the NYMEX building itself was mostly undamaged. Despite the devastation, the exchange's management and staff had the exchange back up and running in very short order.[14] After the attacks, the NYMEX built a $12 million trading floor backup facility outside of New York City with 700 traders' booths, 2,000 telephones, and a backup computer system. This backup was in case of another terrorist attack or natural disaster in Lower Manhattan.[15]

NYMEX held a virtual monopoly on 'open market' oil futures trading (as opposed to the dark market or 'over the counter' market). However in the early 2000s the electronically based exchanges started taking away the business of the open outcry markets like NYMEX. Enron's online energy trading system was part of this trend. Jeff Sprecher's IntercontinentalExchange, or ICE, was another example. ICE eventually began trading oil contracts that were extremely similar to NYMEX's, taking away market share almost immediately. [6]

The open outcry NYMEX pit traders had always been against electronic trading because it threatened their income and their lifestyle. The executives at NYMEX felt that electronic trading was the only way to keep the exchange competitive. NYMEX teamed up with the Chicago Mercantile Exchange to use Globex in 2006. The trading pits emptied out as many traders quit. Banks, hedge funds, and huge oil companies stopped making telephone calls to the pits and started trading directly for themselves over screens. [17]

The final executive management of NYMEX decided to sell it off in pieces, take golden parachute buyouts, and leave. In 2006 NYMEX underwent an Initial Public Offering (IPO) and was listed on the New York Stock Exchange. The executives and exchange members owning seats on the exchange saw their net worth increase by millions of dollars in a few hours - many of the pit traders, who leased their seats instead of owning, did not. [18]. Other parts of NYMEX were sold to private equity investors and the Chicago Mercantile Exchange. The CME got ownership of the physical facilities and began scrubbing the NYMEX logo and name off of various artefacts and closed the NYMEX museum. NYMEX eventually became little more than a brand name used by CME.[19] By 2011, NYMEX open outcry trading was relegated for the most part to a small number of people trading options. [20]

As of 2009, holders of COMEX gold futures contracts have experienced problems taking delivery of their metal. Along with chronic delivery delays, some investors have received delivery of bars not matching their contract in serial number and weight. The delays cannot be easily explained by slow warehouse movements, as the daily reports of these movements show little activity. Because of these problems, there are concerns that COMEX may not have the gold inventory to back its existing warehouse receipts.[21] As a result of the CFTC's March 2010 Metals Hearings, position limits will likely be imposed on COMEX Precious Metals Futures Contracts, according to CFTC Commissioner Bart Chilton, in order to avoid continued charges of unfair concentration and manipulation.