Maude Rose "Lores" Bonney OBE (20 November 1897 – 24 February 1994) was an Australian aviatrix and the first woman to fly solo from Australia to England. 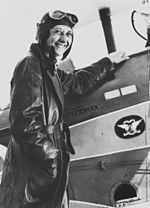 Born as Maude Rose Rubens, in Pretoria, South Africa, she adopted the name "Lores" later in preference to her given names. The family moved first to England, then to Australia. After education first in Melbourne, and then at a finishing school in Germany, she met and married Harry Barrington Bonney, a leather goods manufacturer in 1917 and moved to Brisbane, Queensland.

In 1928 she met Bert Hinkler (Harry Bonney's first cousin once removed), a Queensland aviator who had set a solo England–Australia record in his Avro Avian biplane (now in the Queensland Museum, Brisbane). His exploits fired her imagination and her first flight in his Avian confirmed her determination to learn to fly. She took her first lessons secretly, but when she told her husband, he bought her the de Havilland DH.60 Gypsy Moth with which she began her record-breaking flights:

The outbreak of World War II ended her flying career just as she was planning her next flight – around the world, via Japan, Alaska and the US. VH-UVE was destroyed in a hangar fire in 1939. VH-UPV was requisitioned for the war effort, deployed to a flying training unit, declared unserviceable and scrapped after the war. Lores Bonney died at her home at Miami on Queensland's Gold Coast in 1994, aged 96.

For her Australia–England flight, she was awarded an O.B.E. by King George V. The Bonney Trophy which she presented in England is still awarded annually to an outstanding British woman pilot. The Australian Women Pilots Association has established a trophy in her honour. Lores Bonney was inducted into the "Ninety-Nines" the American society of women flyers who had pioneering roles in aviation. Her name was placed on the wall of the Flyer's Chapel at California's St. Francis Atrio Mission alongside the names of icons such as Charles Lindbergh, Charles Kingsford Smith and Amelia Earhart. Griffith University, Queensland, awarded her an honorary doctorate for her services to aviation. But Lores Bonney's achievements and flights have largely been forgotten, overshadowed by other women pilots of her era who received more promotion and publicity. And unfortunately, both her aircraft, which would today command a respected place in any Australian aviation museum, no longer exist.