The Belt System is a series of connected limited-access highways that form a belt-like circle around the New York City boroughs of Brooklyn and Queens. The system comprises four officially separate parkways; however, three of the four are signed as the Belt Parkway. The three parkways that make up the signed Belt Parkway—the Shore Parkway, the Southern Parkway (not to be confused with the Southern State Parkway), and the Laurelton Parkway—are a combined 25.29 miles (40.70 km) in length.

The Shore Parkway, Southern Parkway, Laurelton Parkway, and Cross Island Parkway are collectively known as the "Belt System".[2] The four components of the Belt System are designated as NY 907C, NY 907D, NY 907B, and NY 907A, respectively, by the New York State Department of Transportation. All four numbers are reference route designations and are not signed.[3] Excluding the Cross Island Parkway, the other three segments are now known collectively as the official "Belt Parkway". It is designated an east–west route, and its exit numbering system begins, in standard fashion, at the western terminus of the Shore Parkway, the westernmost parkway in the system. The numbering increases as the parkway proceeds eastward, and continues onto the Cross Island at the eastern terminus of the Belt Parkway. The north–south parkway retains the numbering scheme to its northern terminus. 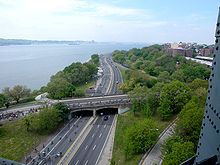 The Shore Parkway begins at the Gowanus Expressway near the east end of the Verrazano Narrows Bridge and proceeds eastward through Brooklyn. The Shore, the part of the system many think of when they mention "Belt Parkway," makes a large arc to the south, passing under the Verrazano Narrows Bridge and turning southeast. Entering the Coney Island area, the parkway turns east, roughly following the former path of Coney Island Creek before turning northeast to skip across former islands in Jamaica Bay and reach the Southern Parkway. The Shore Parkway Greenway lies between the Parkway and the shore, connecting Owl's Head Park to Coney Island, and Brigham Street in Sheephead Bay to Howard Beach. 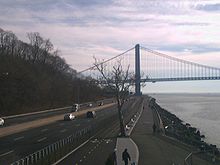 Belt Parkway with Verrazano Bridge in the background

Shore Road Drive parallels the first stretch of the Shore Parkway. Exit 1 is for the Shore Road Drive (unsigned). The road makes a curve to the south after exit 1 and heads towards the Verrazano Bridge. The Shore Parkway goes through Shore Road Park until exit 2, which is for Shore Road (unsigned) and 4th Avenue. Exit 3 is on the westbound side only, while going eastbound the next exit is number 4. Exit 3 is for the Verrazano Narrows Bridge towards Staten Island. In Dyker Beach Park, exit 4 interchanges for Bay 8th Street. Exit 5 is next, for the Bay Parkway, which heads northward towards the neighborhood of Midwood. 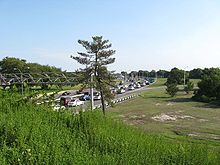 Exit 13 is next for Rockaway Parkway, which begins at a traffic circle. Exit 14 comes next for Pennsylvania Avenue. As the Shore Parkway gets closer to Jamaica, exit 15 comes for Erskine Street. After exits 17S and 17N for State Route 27 and Cross Bay Boulevard, the road becomes known as the Southern Parkway.

The Southern Parkway, distinct from the Southern State Parkway in Nassau and Suffolk counties, is located entirely within the median of Conduit Boulevard, NY 27. between Cross Bay Boulevard and Brookville Boulevard. It passes by JFK International Airport. After Exits 17N/17S, the Belt Parkway interchanges with NY 878 (the Nassau Expressway), I-678 (the Van Wyck Expressway), and going eastbound, also the JFK Expressway as well as Lefferts Boulevard, at Exit 19 (Westbound Lefferts Boulevard is Exit 18B, the Nassau Expressway and the Van Wyck is Exit 19, and the JFK Expressway is Exit 20). The next exit is for 150 Street and Rockaway Boulevard, which is Exit 20 eastbound and Exit 21A westbound. Exit 21B is Farmers Boulevard and Guy R. Brewer Boulevard. After that comes Springfield Boulevard at Exit 22. The parkway now turns to the northeast. North and South Conduit Avenues take NY 27 to Long Island. there is an eastbound exit to South Conduit Avenue which is Exit 23B. Going westbound, just before the curve, there is access to North Conduit Avenue at Exit 23A. Past the curve the Laurelton Parkway begins.

The Laurelton Parkway is a short connector between the Southern Parkway and the Cross Island Parkway. There is a one-way service road on the west side going westbound, and on the east side, the two-way Brookville Boulevard acts as a service road. Going eastbound, Exit 24A is for Francis Lewis Boulevard and Merrick Boulevard. Going westbound, Exit 24B is a separate exit for Merrick Boulevard. It also serves 130 Avenue. There is also a westbound-only exit, Exit 23A, which goes to North Conduit Avenue. Just before the end of the parkway, Exit 25B serves Elmont Road and Linden Boulevard going eastbound, and Exit 25A goes to the Southern State Parkway. The Belt (Laurelton) Parkway now becomes the Cross Island Parkway. 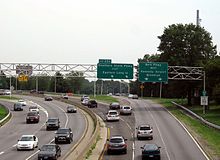 Exit 25A as seen from the southbound Cross Island Parkway

The Belt Parkway was proposed by builder and highway advocate Robert Moses in 1930 to provide modern highway access to Manhattan and to connect to, and use similar design principles to, parkways already constructed on Long Island and Westchester County, New York. Construction began in 1934. The full loop was completed when the Brooklyn-Queens Expressway (also known as the "BQE") was finished in 1960.

Though some signage bears the name "Belt Parkway," the original plan never called for a highway of that name, rather a system of different named parkways called the "Belt System." The Belt System is made up of a series of interconnecting highways, none of which are actually named the Belt Parkway. Originally, the highways were the Gowanus Parkway from the Brooklyn-Battery Tunnel to the Shore Parkway; the entirety of the Shore, Southern, Laurelton, and Cross Island Parkways; the Whitestone Parkway from the Cross Island to the Grand Central Parkway; and the Grand Central from the Whitestone to the Triborough Bridge.

All the original parkways, except the Gowanus, were built on grassy rights-of-way with trees, in a more pleasant surrounding than most highways of their time. The Gowanus Parkway was built as an elevated structure over Third and Hamilton Avenues in order to avoid the active docks and industrial areas including Sunset Park, Brooklyn.

Like most parkways in New York State, the parkways comprising the Belt System were closed to commercial traffic, including any vehicle with a non-passenger registration and all commercial trucking of any size. Originally even station wagons, which had "suburban" registrations, were excluded but they were later allowed, along with passenger-registered SUVs and vans.