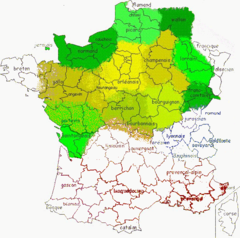 The geographical spread of Picard and Chtimi among the Oïl languages (other than French) can be seen in shades of green and yellow on this map.

Picard is a language (or a set of languages) closely related to French, and as such is one of the larger group of Romance languages. It is spoken in two regions in the far north of France – Nord-Pas-de-Calais and Picardy – and in parts of the Belgian region of Wallonia, the district of Tournai (Wallonie Picarde) and a part of the district of Mons (toward Tournai and the Belgian border).

Picard is known by several different names. Residents of Picardie simply call it picard, whereas it is more commonly known as chti or chtimi in the South part of French Flanders (around Lille and Douai) and in North-East Artois (around Béthune and Lens), or rouchi around Valenciennes; or simply as patois by Northerners in general. Linguists group all of these under the name Picard. In general the variety spoken in Picardy is understood by speakers in Nord-Pas-de-Calais, and vice versa.

The following is an extract from a report by Prof. Bernard Cerquiglini, the director of the National Institute of the French Language (l'Institut national de la langue française; a branch of the National Center of Scientific Research, CNRS) for the French Education, Research and Technology Minister and the French Culture and Communications Minister on the languages of France (April 1999):

The gap between French which is itself a dialect of langue d'oïl and the varieties of langues d'oïl, which today we would call "French dialects," has continued to widen; Franc-comtois, Walloon, Picard, Norman, Gallo, Poitevin, Saintongeais, Bourguignon-morvandiau, Lorrain must be accepted among the regional languages of France; by placing them on the list [of French regional languages], they will be known from then on as langues d'oïl.

Despite the fact it has no official status as a language in France, Picard, along with all the other languages spoken in France, benefits from any actions led by the Culture Minister's General Commission on the French Language and the Languages of France (la Délégation générale à la langue française et aux langues de France).

Picard, like French, is one of the langues d'oïl and belongs to the Gallo-Roman family of languages. It consists of all the varieties used for writing (Latin: scriptae) in the north of France from before the year 1000 (in the south of France at that time the Occitan language was used). Often the langues d'oïl are referred to simply as Old French.

Picard is phonetically quite different from the central langues d'oïl, which evolved into the modern French language. Among the most notable traits, the evolution in Picard towards palatalization is less marked than in the central langues d'oïl, in which languages it is particularly striking; /k/ or /ɡ/ before /j/, tonic /i/ and /e/, as well as in front of tonic /a/ and /ɔ/ (the open /o/ of the French porte) in central Old French, but not in Picard:

The effects of palatalization can be summarised as:

This leads to striking differences, such as Picard cachier ('to hunt') ~ Old French chacier, which later took the modern French form of chasser.

Because of how near Paris is to the northernmost regions of France, French (that is, the languages that were spoken in and around Paris) greatly influenced Picard, and vice versa. The closeness between Picard and French is the reason why Picard is not always recognised as a language in its own right, as opposed to a "distortion of French" as it is often viewed.

The Picard language includes a variety of extremely closely related dialects. It is difficult to list them all accurately in the absence of specific studies on the dialectical variations, but we can probably provisionally distinguish between the following principal varieties[citation needed]: Amiénois, Vimeu-Ponthieu, Vermandois, Thiérache, Beauvaisis, "chtimi" (Bassin Minier, Lille), dialects in other regions near Lille (Roubaix, Tourcoing, Mouscron, Comines), "rouchi" (Valenciennois) and Tournaisis, Borain, Artésien rural, Boulonnais. These varieties are defined by specific phonetic, morphological or lexical traits, and sometimes by a distinctive literary tradition.

Some words and phrases

Many patois words are very similar to French, but a large number of words are totally specific to Picard, principally terms relating to mining. 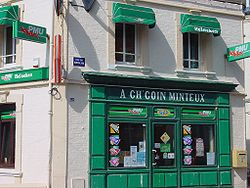 Picard is not taught in French schools (apart from a few one-off and isolated courses) and is generally only spoken among friends or family members. It has nevertheless been the object of university research in Lille and Amiens. Since people are nowadays able to move around France more easily than in past centuries, the different varieties of Picard are converging and becoming more similar. In its daily use, Picard is tending to lose its distinctive features and may be confused with regional French. At the same time, even though most Northerners can understand Picard today, fewer and fewer are able to speak it, and people who speak Picard as their first language are increasingly rare, particularly under age 50.[1]

The 2008 film Bienvenue chez les Ch'tis, starring comedian Dany Boon, deals with Ch'ti language and culture and the perceptions of the region by outsiders.

Today Picard is primarily a spoken language. This was not the case originally; indeed, from the medieval period there is a wealth of literary texts in Picard. However, Picard was not able to compete with the inter-regional literary language, which French became, and was slowly reduced to the status of a "regional language."

A more recent body of Picard literature, written during the last two centuries, also exists. Modern written Picard is generally a transcription of the spoken language. For that reason, words are often spelled in a variety of different ways (in the same way that English and French were before they were standardised). One system of spelling for Picard words is very similar to that of French. This is undoubtedly the easiest for French speakers to understand, but can also contribute the stereotype that Picard is only a corruption of French rather than a language in its own right. Various spelling methods have been proposed since the 1960s to offset this disadvantage, and to give Picard a visual identity that is distinct from French. At the present time, there is a consensus, at least between universities, in favor of the written form known as Feller-Carton (based on the Walloon spelling system – which was developed by Jules Feller – and adapted for Picard by Prof. Fernand Carton).

Picard, although it is primarily a spoken language, does also have a body of written literature: poetry, songs ("P'tit quinquin" for example), comic books etc.

A certain number of dictionaries and patois guides also exist (for French speakers):