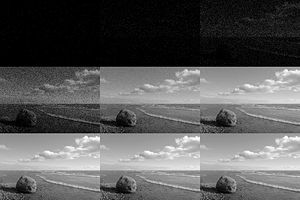 Shot noise is a type of electronic noise that may be dominant when the finite number of particles that carry energy (such as electrons in an electronic circuit or photons in an optical device) is sufficiently small so that uncertainties due to the Poisson distribution, which describes the occurrence of independent random events, are of significance. It is important in electronics, telecommunications, optical detection, and fundamental physics.

The term can also be used to describe any noise source, even if solely mathematical, of similar origin. For instance, particle simulations may produce a certain amount of "noise", where due to the small number of particles simulated, the simulation exhibits undue statistical fluctuations which don't reflect the real-world system. The magnitude of shot noise increases according to the square root of the expected number of events, such as the electrical current or intensity of light. But since the strength of the signal itself increases more rapidly, the relative proportion of shot noise decreases and the signal to noise ratio (considering only shot noise) increases anyway. Thus shot noise is more frequently observed with small currents or light intensities following sufficient amplification. 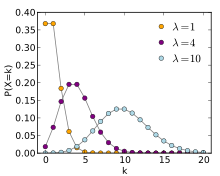 The number of photons that are collected by a given detector varies, and follows a Poisson distribution, depicted here for averages of 1, 4, and 10.

For large numbers the Poisson distribution approaches a normal distribution, typically making shot noise in actual observations indistinguishable from true Gaussian noise except when the elementary events (photons, electrons, etc.) are so few that they are individually observed. Since the standard deviation of shot noise is equal to the square root of the average number of events N, the signal-to-noise ratio is given by:

Thus when N is very large, the signal-to-noise ratio is very large as well, and any relative fluctuations in N due to other sources are more likely to dominate over shot noise. However when the other noise source is at a fixed level, such as thermal noise, increasing N (the DC current or light level, etc.) can sometimes lead to dominance of shot noise nonetheless.

It is known that in a statistical experiment such as tossing a fair coin and counting the occurrences of heads and tails, the numbers of heads and tails after a great many throws will differ by only a tiny percentage, while after only a few throws outcomes with a significant excess of heads over tails or vice versa are common; if an experiment with a few throws is repeated over and over, the outcomes will fluctuate a lot. (It can be proven that the relative fluctuations reduce as the square root of the number of throws, a result valid for all statistical fluctuations, including shot noise.)

Shot noise exists because phenomena such as light and electric current consist of the movement of discrete, quantized 'packets'. Consider light—a stream of discrete photons—coming out of a laser pointer and hitting a wall to create a visible spot. The fundamental physical processes that govern light emission are such that these photons are emitted from the laser at random times; but the many billions of photons needed to create a spot are so many that the brightness, the number of photons per unit time, varies only infinitesimally with time. However, if the laser brightness is reduced until only a handful of photons hit the wall every second, the relative fluctuations in number of photons, i.e., brightness, will be significant, just as when tossing a coin a few times. These fluctuations are shot noise.

Shot noise in electronic circuits is due to the quantized nature of the electric charge. It consists of random fluctuations of the electric current in a DC current due to that current actually consisting of a flow of discrete charges (electrons). Because the electron has such a tiny charge, however, shot noise is of relative insignificance in many (but not all) cases of electrical conduction. For instance 1 ampere of current consists of about 6.24×1018 electrons per second; even though this number will randomly vary by several billion in any given second, such a fluctuation is minuscule compared to the current itself.

But with very small currents and considering shorter time scales (thus wider bandwidths) one may find otherwise. For instance, a microwave circuit operates on time scales of less than a nanosecond and if we were to have a current of 16 nanoamperes that would amount to only 100 electrons passing every nanosecond. According to Poisson statistics the actual number of electrons in any nanosecond would vary by 10 electrons rms, so that one sixth of the time less than 90 electrons would pass a point and one sixth of the time more than 110 electrons would be counted in a nanosecond. Now with this small current viewed on this time scale, the shot noise amounts to 1/10 of the DC current itself.

While this is the result when the electrons contributing to the current occur completely randomly, unaffected by each other, there are important cases in which these natural fluctuations are largely suppressed due to a charge build up. Take the previous example in which an average of 100 electrons go from point A to point B every nanosecond. During the first half of a nanosecond we would expect 50 electrons to arrive at point B on the average, but in a particular half nanosecond there might well be 60 electrons which arrive there. This will create a more negative electric charge at point B than average, and that extra charge will tend to repel the further flow of electrons from leaving point A during the remaining half nanosecond. Thus the net current integrated over a nanosecond will tend more to stay near its average value of 100 electrons rather than exhibiting the expected fluctuations (10 electrons rms) we calculated. This is the case in ordinary metallic wires and in metal film resistors, where shot noise is almost completely cancelled due to this anti-correlation between the motion of individual electrons, acting on each other through the coulomb force.

However this reduction in shot noise does not apply when the current results from random events at a potential barrier which all the electrons must overcome due to a random excitation, such as by thermal activation. This is the situation in p-n junctions, for instance.[1][2] A semiconductor diode is thus commonly used as a noise source by passing a particular DC current through it.

Shot noise is distinct from voltage and current fluctuations expected in thermal equilibrium; this occurs without any applied DC voltage or current flowing. These fluctuations are known as Johnson-Nyquist noise or thermal noise and increase in proportion to the Kelvin temperature of any resistive component. However both are instances of white noise and thus cannot be distinguished simply by observing them even though their origins are quite dissimilar.

Since shot noise is a Poisson process due to the finite charge of an electron, one can compute the root mean square current fluctuations as being of a magnitude

where q is the elementary charge of an electron, Δf is the bandwidth in hertz over which the noise is considered, and I is the DC current flowing.

For a current of 100 mA, measuring the current noise over a bandwidth of 1 Hz, we obtain

would be generated. Coupling this noise through a capacitor, one could supply a noise power of

to a matched load.

In optics, shot noise describes the fluctuations of the number of photons detected (or simply counted in the abstract) due to their occurrence independent of each other. This is therefore another consequence of discretization, in this case of the energy in the electromagnetic field in terms of photons. In the case of photon detection, the relevant process is the random conversion of photons into photo-electrons for instance, thus leading to a larger effective shot noise level when using a detector with a quantum efficiency below unity. Only in an exotic squeezed coherent state can the number of photons measured per unit time have fluctuations smaller than the square root of the expected number of photons counted in that period of time. Of course there are other mechanisms of noise in optical signals which often dwarf the contribution of shot noise. When these are absent, however, optical detection is said to be "photon noise limited" as only the shot noise (also known as "quantum noise" or "photon noise" in this context) remains.

Shot noise is easily observable in the case of photomultipliers and avalanche photodiodes used in the Geiger mode, where individual photon detections are observed. However the same noise source is present with higher light intensities measured by any photodetector, and is directly measurable when it dominates the noise of the subsequent electronic amplifier. Just as with other forms of shot noise, the fluctuations in a photo-current due to shot noise scale as the square-root of the average intensity:

The shot noise of a coherent optical beam (having no other noise sources) is a fundamental physical phenomenon, reflecting quantum fluctuations in the electromagnetic field (due to the so-called zero-point energy. This sets a lower bound on the noise introduced by quantum amplifiers which preserve the phase of an optical signal.