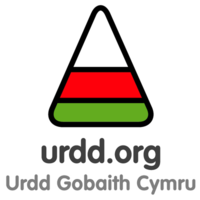 Mistar Urdd (Mr Urdd) is the personification of the triangular red, white and green logo of the Welsh youth movement, Urdd Gobaith Cymru (The Welsh League of Youth).

Created in September 1976 by Wynne Melville Jones, a marketing assistant at the Urdd who doodled a face onto a badge of the logo, Mistar Urdd became a hugely popular figure, touring schools and attending Eisteddfodau. Plush versions of the character were available in a range of sizes, and his image has been used on a number of t-shirts.

Although well known within Wales for three decades, Mistar Urdd's fame has been spread further afield thanks to the rock band Super Furry Animals whose song Trôns Mr Urdd (Mr Urdd's Underpants) is a tongue-in-cheek tribute to the character. The song appears on the B-Side of the band's 1997 single Hermann Loves Pauline and on the American special-edition version of their album "Mwng".

Coincidentally, Mistar Urdd's own pop career reached its pinnacle during the mid 1970s with a song titled Hei, Mistar Urdd, including the classic chorus:

which translates into English as:

Hey, Mr Urdd in your red, white and green,
There's fun to be had in your company everywhere.
Hey, Mr Urdd, come for a stroll along the roads,
We'll sing our song to all of Wales's youth.