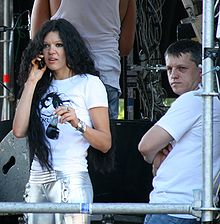 Oleksandr Ksenofontov (or Xenophontov) is a Ukrainian record producer and lyricist. He is the husband of the winner of the Eurovision Song Contest 2004, Ruslana. Ksenofontov wrote the lyrics to the winning song, "Wild Dances".[1] They have been married since December 28, 1995. He is also a lead singer of legendary Ukrainian rock group Tea Fan Club (Club of Amateurs of Tea or Клуб Шанувальників Чаю). Together with Ruslana, he is the owner of the Luxen Company.