The Atlantic cod, Gadus morhua, is a well-known demersal food fish belonging to the family Gadidae. It is also commercially known as cod, codling or haberdine.[2]

In the western Atlantic Ocean cod has a distribution north of Cape Hatteras, North Carolina, and round both coasts of Greenland; in the eastern Atlantic it is found from the Bay of Biscay north to the Arctic Ocean, including the Baltic Sea, the North Sea, Sea of the Hebrides,[3] areas around Iceland and the Barents Sea.

It can grow to 2 meters in length and weigh up to 96 kilograms (210 lb). It can live for 25 years and sexual maturity is generally attained between ages 2 to 4,[4] but can be as late as 8 years in the northeast Arctic.[5] Colouring is brown to green with spots on the dorsal side, shading to silver ventrally. A lateral line is clearly visible. Its habitat ranges from the shoreline down to the continental shelf.

Several cod stocks collapsed in the 1990s (declined by >95% of maximum historical biomass) and have failed to recover even with the cessation of fishing.[6] This absence of the apex predator has led to a trophic cascade in many areas.[6] Many other cod stocks remain at risk. The "Atlantic Cod" is labelled VU (vulnerable) on the IUCN Red List of Threatened Species.[1] 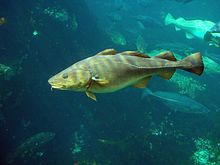 The Northeast Atlantic is the world's largest population of cod. By far the largest part of this population is the North-East Arctic Cod, as it is labelled by the ICES, or the Arcto-Norwegian cod stock, also referred to as skrei, a Norwegian name meaning something like "the wanderer", distinguishing it from coastal cod. The North-East Arctic Cod is found in the Barents Sea area. This stock spawns in March and April along the Norwegian coast, about 40% around the Lofoten archipelago. Newly hatched larvae drift northwards with the coastal current while feeding on larval copepods. By summer the young cod reach the Barents Sea where they stay for the rest of their life, until their spawning migration. As the cod grow, they feed on krill and other small crustaceans and fish. Adult cod primarily feed on fish such as capelin and herring. The northeast Arctic cod also shows cannibalistic behaviour. Estimated stock size was in 2008 2.26 million tonnes.

The North Sea cod stock is primarily fished by European Union member states and Norway. In 1999 the catch was divided among Denmark (31%), Scotland (25%), the rest of the United Kingdom (12%), the Netherlands (10%), Belgium, Germany and Norway (17%). In the 1970s, the annual catch rose to between 200,000 - 300,000 tons. Due to concerns about overfishing, catch quotas were repeatedly reduced in the 1980s and 1990s. In 2003, ICES stated that there is a high risk of stock collapse if current exploitation levels continue, and recommended a moratorium on catching Atlantic cod in the North Sea during 2004. However, agriculture and fisheries ministers from the Council of the European Union endorsed the EU/Norway Agreement and set the total allowable catch (TAC) 27,300 tons. Seafood sustainability guides such as the Monterey Bay Aquarium's Seafood Watch often recommend environmentally conscious customers not purchase Atlantic Cod.

The stock of North-East Arctic cod was more than a million tons following World War II, but declined to a historic minimum of 118,000 tons in 1987. The North-East Arctic cod catch reached a historic maximum of 1,343,000 tons in 1956, and bottomed out at 212,000 tons in 1990. Since 2000, the spawning stock has increased quite quickly, helped by low fishing pressure. However, there are worries about a decreased age at first spawning (often an early sign of stock collapse), combined with the level of discards and unreported catches. The total catch in 2003 was 521,949 tons, the major fishers being Norway (191,976 tons) and Russia (182,160 tons). 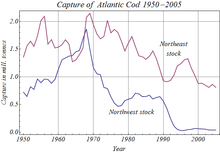 The northwest Atlantic cod has been regarded as heavily overfished throughout its range, resulting in a crash in the fishery in the United States and Canada during the early 1990s.

Newfoundland's northern cod fishery can be traced back to the 16th century. "On average, about 300,000 tonnes of cod was landed annually until the 1960s, when advances in technology enabled factory trawlers to take larger catches. By 1968, landings for the fish peaked at 800,000 tonnes before a gradual decline set in. With the reopening of the limited cod fisheries in 2006, nearly 2,700 tonnes of cod were hauled in. In 2007, it was estimated that offshore cod stocks were at one per cent of what they were in 1977".[7]

Technologies that contributed to the collapse of Atlantic Cod include engine power vessels and frozen food compartments aboard ships. Engine power vessels had larger nets, larger engines, and better navigation. The capacity to catch fish became limitless. In addition, sonar technology gave an edge to catching and detecting fish. Sonar was originally developed during WWII to locate enemy submarines, but was later applied to locating schools of fish. These new technologies, as well as bottom-trawlers that destroyed entire ecosystems, contributed to the collapse of Atlantic Cod. They were vastly different from old techniques used, such as hand lines and long lines.[8]

The fishery has yet to recover, and may not recover at all because of a possibly stable change in the food chain. Atlantic cod was a top-tier predator, along with haddock, flounder and hake, feeding upon smaller prey such as herring, capelin, shrimp and snow crab.[6] With the large predatory fish removed, their prey has had a population explosion and have become the top predators, affecting the survival rates of cod eggs and fry.

Cod populations or stocks can differ significantly both in appearance and biology. For instance, the cod stocks of the Baltic Sea are adapted to low-salinity water. Organisations such as the Northwest Atlantic Fishery Organization (NAFO) and ICES divide the cod into management units or stocks; however these units are not always biologically distinguishable stocks. Some major stocks/management units on the Canadian/US shelf (see map of NAFO areas) are the Southern Labrador-Eastern Newfoundland stock (NAFO divisions 2J3KL), the Northern Gulf of St. Lawrence stock (NAFO divisions 3Pn4RS), the Northern Scotian Shelf stock (NAFO divisions 4VsW), which all lie in Canadian waters, and the Georges Bank and Gulf of Maine stocks in United States waters. In the European Atlantic, there are numerous separate stocks: on the shelves of Iceland, the coast of Norway, the Barents Sea, the Faroe Islands, off western Scotland, the North Sea, the Irish Sea, the Celtic Sea and in the Baltic Sea.

Fertilized eggs drift with ocean currents and develop into larvae.

Age of maturation varies between cod stocks, from ages 2 to 4 in the west Atlantic,[15] but as late as 8 years in the northeast Arctic.[5] 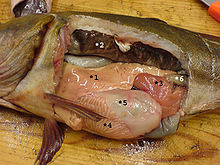 Atlantic cod act as intermediate, paratenic or definitive hosts to a large number of parasite species: 107 taxa listed by Hemmingsen and MacKenzie (2001)[17] and sevev new records by Perdiguero-Alonso et al. (2008).[17] The predominant groups of cod parasites in the northeast Atlantic were trematodes (19 species) and nematodes (13 species), including larval anisakids, which comprised 58.2% of the total number of individuals.[17] Parasites of Atlantic cod include copepods, digeneans, monogeneans, acanthocephalans, cestodes, nematodes, myxozoans and protozoans:[17] 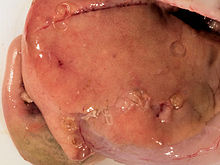 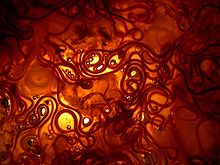 This article incorporates CC-BY-2.0 text from the reference.[17]