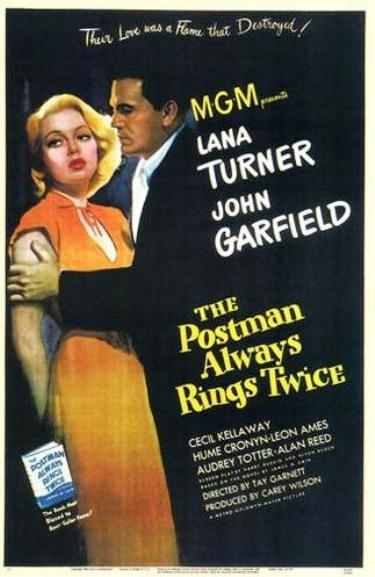 Frank Chambers () is a drifter who stops at a diner for a meal, and ends up working there. The diner is operated by a beautiful young woman, Cora Smith (), and her much older husband, Nick ().

Frank and Cora soon have an affair after they meet. Cora is tired of her situation, married to a man she does not love, and working at a diner that she wishes to own. She and Frank scheme to murder Nick in order to start a new life together without her losing the diner. Their first attempt at the murder is a failure, but they eventually succeed.

The local prosecutor, Kyle Sackett (Leon Ames), suspects what has occurred, but doesn't have enough evidence to prove it. As a tactic intended to get Cora and Frank to turn on one another, he tries only Cora for the crime. Although they do turn against each other, a clever ploy from Cora's lawyer prevents Cora's full confession from coming into the hands of the prosecutor. With the tactic having failed to generate any new evidence for the prosecution, Cora benefits from a plea bargain in which she pleads guilty to manslaughter and receives probation.

Frank and Cora eventually patch together their tumultuous relationship, and now plan for a future together. But as they seem to be prepared finally to live "happily ever after", Cora dies in a car accident. Ironically, although it was in fact truly an accident, the circumstances seem suspicious enough that Frank is then wrongly convicted of murdering her by having staged the accident. He is sentenced to death.

When informed that his last chance at a reprieve from his death sentence has been denied, and thus his execution is now at hand, Frank is at first incredulous that he will be executed for murdering Cora, even though he is innocent of having done so. But when informed that authorities now have irrefutable evidence of his guilt in the murder of Nick, Frank decides that his impending death is actually his overdue punishment for that crime, despite his official conviction being for killing Cora.

Frank contemplates that when a person is expecting to receive a letter, it is of no concern if at first he does not hear the postman ring the doorbell, because the postman will always ring a second time, and that second ring will invariably be heard. After they escaped legal punishment for Nick's murder, but nonetheless with Cora now dead and Frank on his way to the death chamber, he notes that the postman has indeed rung a second time for each of them.

, film critic of "," gave the film a positive review and lauded the acting and direction of film, writing, "Too much cannot be said for the principals. Mr. Garfield reflects to the life the crude and confused young hobo who stumbles aimlessly into a fatal trap. And Miss Turner is remarkably effective as the cheap and uncertain blonde who has a pathetic ambition to "be somebody" and a pitiful notion that she can realize it through crime. Cecil Kellaway is just a bit too cozy and clean as Miss Turner's middle-aged spouse. He is the only one not a Cain character, and throws a few scenes a shade out of key. But Hume Cronyn is slyly sharp and sleazy as an unscrupulous criminal lawyer, Leon Ames is tough as a district attorney and Alan Reed plays a gum-shoe role well." [ [http://movies.nytimes.com/movie/review?_r=1&res=9C05EEDD133AEF33A25750C0A9639C946793D6CF&oref=slogin Crowther, Bosley] . "The New York Times," film review, "The Postman Always Rings Twice," With Lana Turner in a Star Role," . Last accessed: .]

Critic Stephen MacMillan Moser appreciated Lana Turner's the acting and wrote, "It is perhaps her finest work -- from a body of work that includes very few truly stellar performances. She was a star, and not necessarily an actress, and because of that, so much of her work does not stand the test of time. She is best remembered for the spate of films like "Peyton Place" and "Madame X" that traded on her personal tragedies, but Postman, which predates all that, is a stunner -- a cruel and desperate and gritty James Cain vehicle that sorely tests Lana's skills. But she succeeds marvelously, and from the first glimpse of her standing in the doorway in her white pumps, as the camera travels up her tanned legs, she becomes a character so enticingly beautiful and insidiously evil that the audience is riveted." [ [http://www.austinchronicle.com/gyrobase/Issue/review?oid=oid%3A79999 MacMillan Moser, Stephen] . "," film/video review, . Last accessed: January 9, 2008.]