The larger immigration of Muslims to Scotland is relatively recent. The bulk of Muslims in Scotland come from families who immigrated during the late 20th century. In Scotland Muslims represent 0.9% of the population (42,557),[1] with 30,000 in Glasgow.[2] Muslims are the third largest non-Christian group after atheists and agnostics.

Many Scottish Muslims are of South Asian descent primarily hailing from Pakistan.

The first Muslim student in Scotland was Wazir Beg from Bombay (now "Mumbai"). He is recorded as being a medical student who studied at the University of Edinburgh between 1858-59.[3]

The production of goods and Glasgow's busy port meant that many lascars were employed there. Dundee was at the peak of importing jute; hence, sailors from Bengal were a feature at the port. Records from the Glasgow Sailors' Home show that, in 1903, nearly a third (5,500) of all boarders were Muslim lascars. 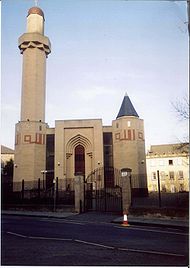 Two important mosques in Scotland are Edinburgh Central Mosque, which took more than six years to complete at a cost of £3.5m[4] and has a main hall that can hold over one thousand worshippers,[5] and Glasgow Central Mosque.