Ark Royal was the sister ship to HMS Eagle, which was initially named HMS Audacious, hence the name of the class. Four Audacious-class ships were laid down, but two (HMS Africa and the original HMS Eagle) were cancelled at the end of the war, and construction of the other two suspended for several years. Both surviving ships would be extensively upgraded throughout their lifetimes.

The ship was originally designated Irresistible, but was renamed Ark Royal prior to launch. The immediately previous Ark Royal, also an aircraft carrier, was torpedoed off Gibraltar on 14 November 1941 with the loss of one member of the ship's company.

She was launched in 1950, and her completion took five more years. In this time, she underwent redesign and, when completed, she was markedly different from her sister ship. Shortly before her launch from the Cammell Laird shipyard, an image of the ship painted with her white undercoat was captured by the pictorialist photographer Edward Chambré Hardman. This has been exhibited many times under the name 'Where Great Ships Are Built' and later 'Birth Of The Ark Royal'. When commissioned, she had a 5.5° partially angled flight deck, two steam catapults capable of launching aircraft weighing up to 30,000 pounds (14,000 kg), a deck-edge lift on the port side (the first British ship to be fitted with such a device), modified armament, and the new mirror landing system. Ark Royal was the first ship to be constructed with an angled flight deck and steam catapults, as opposed to having them added after launching.[2] These innovations allowed aircraft to land and take off from the carrier at the same time. Her flight deck as built was 800 by 112 feet (240 by 34 m).

About a year after commissioning, her forward port 4.5 inch (113 mm) guns were removed to improve aircraft operations over the angled deck. Four years later, the port deck-edge lift and the forward starboard 4.5 inch (113 mm) guns were also removed. The remaining 4.5 inch guns were removed in the 1964 refit. From March 1967 to February 1970, she underwent her final major refit, partially to enable her to operate the larger Phantom and Buccaneer Mk.2 aircraft. Modifications included an 8.5° angled flight deck, new catapults and arrestor cables, a modified island and a partially new electronic suite (some of her original radars were retained). She was also fitted for four Sea Cat missile launchers, but they were never installed, so she emerged from this refit with no defensive armament.

Initially on entry into service, the ship had a complement of up to 50 aircraft comprising Sea Hawks, Sea Venoms, Gannets, Skyraiders and various helicopters. As later aircraft types grew in size and complexity, her air group fell to below 40 when she left service in 1978.

Ark Royal participated in many exercises as part of the British fleet and NATO squadrons, but saw no combat duty. She was not involved in the Suez Crisis of 1956, about a year after her commissioning, because she was doing post-refit trials. In 1963, she carried out trials for a new type of Vertical/Short Take Off and Landing (V/STOL) aircraft, the Hawker P.1127, which developed into the Hawker Siddeley Harrier.

She was part of the Beira Patrol enforcing the naval blockade of Rhodesia in 1965. The 1966 Defence White Paper planned the end of British carriers in the early 1970s but she went into dock for her refit to head off dockyard redundancies and the likely political issues.[3] A new government re-examined the case for carriers finding that shore-based aircraft could not provide adequate cover for British concerns "East of Suez".

On 9 November 1970 while in the Mediterranean to participate in a NATO exercise she collided with a Soviet Kotlin class destroyer which was shadowing Ark Royal (a common practice during the Cold War).[4] Ark Royal was damaged only slightly, while the Soviet destroyer sustained minor damage and two missing crew. Ark Royal’s commanding officer, Captain Ray Lygo, was cleared of blame at the subsequent court-martial.

The ship featured in the 1960s British television series Not Only... But Also starring Peter Cook and Dudley Moore. In one episode, they used the ship's catapult to shoot a piano into the sea. When commissions ended, items were fired off the catapult, including pianos and once a toilet complete with paying-off pennant. 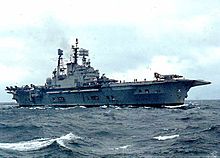 By 1970, Ark Royal now had a complement of 39 aircraft. This typically comprised 12 Phantom FG MK.1s, of 892 Squadron, 14 Buccaneer S MK.2s of 809 Squadron, 4 Gannet AEW Mk.3s of B Flight 849 Squadron, 6 Sea King HAS Mk.1s of 824 Squadron, 2 Wessex HAR Mk.1s of the Ship's Flight and 1 Gannet COD MK.4. later replaced by a AEW3. The Buccaneers doubled as tanker aircraft, using buddy refuelling pods, and as long-range reconnaissance aircraft with bomb bay-mounted camera packs. In July 1976, she represented Britain at the United States Bicentennial Celebration in Fort Lauderdale, Florida.

In 1972, the Buccaneers aboard HMS Ark Royal took part in a long range strike mission over British Honduras shortly before its independence to deter a possible Guatemalan invasion.[5]

In the late 1970s, the ship made a return to television. A major BBC documentary series, Sailor was made, showing life on board the ship during a February to July 1976 Western Atlantic deployment. Her commanding officer at this time was Captain Wilfred Graham, a later Flag Officer Portsmouth and the ship's Commander (executive officer) was Commander David Cowling. The theme tune for the programme was "Sailing" by Rod Stewart - a song that came to be associated with the ship and her successor. She visited Fort Lauderdale, Florida from the 30th May until the 14th June 1978. 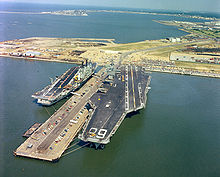 Ark Royal alongside USS Nimitz in 1978

She entered HMNB Devonport for the last time on 4 December 1978 and decommissioned on 14 February 1979 when the White Ensign was lowered for the last time. On 29 March 1980,the MOD announced that she would she sold for scrap ending plans to preserve her. She left Devonport on 22 September 1980 under tow to be scrapped at Cairnryan near Stranraer in Scotland, arriving on the 28th. Breaking up took until 1983. Various parts of the ship remain as souvenirs or memorials for instance, an anchor outside the Fleet Air Arm Museum at RNAS Yeovilton. During her service career, she had 21 commanding officers.[citation needed]

The scrapping of Ark Royal in 1980 at Cairnryan near Stranraer, two years after her sister Eagle, marked the end of conventional fixed-wing aircraft operation aboard Royal Navy carriers. She had borne so many new inventions, yet her replacement was not equipped with any of these. There was some discussion about preserving her as a museum ship, and some private funds were raised; the Ministry of Defence would not sanction these efforts. The Fleet Air Arm Museum has subsequently mimicked the ship's island and flight deck in its central hall as an Aircraft Carrier Experience exhibition.

The Centaur-class aircraft carrier HMS Hermes remained in service after her, but had been converted to a helicopter commando carrier in 1971 and then as a V/STOL carrier. The one much smaller Invincible-class carrier currently in service could carry only vertical/short takeoff and landing aircraft and helicopters. Though the two Queen Elizabeth class carriers originally due to enter service in 2014 and 2016 were initially to have been configured for STOVL operations, in the 2010 Strategic Defence and Security Review, it was announced that one carrier would be converted to CATOBAR configuration in order to operate the F-35C variant of the F-35 Lightning II, instead of the F-35B STOVL variant.[7] This will mark the Royal Navy's return to operation of CATOBAR aircraft carriers after a hiatus of 32 years.

Overhead view of the Ark Royal in 1970