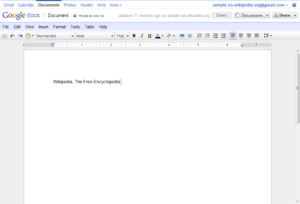 An example of a document in Google Docs

Google Docs is a free, Web-based office suite, and data storage service offered by Google. It allows users to create and edit documents online while collaborating in real-time with other users. Google Docs combines the features of Writely and Spreadsheets with a presentation program incorporating technology designed by Tonic Systems. Data storage of files up to 1 GB total in size was introduced on January 13, 2011, documents created inside Google Docs do not count towards this quota.

Google Docs originated from two separate products, Writely and Google Spreadsheets. Writely was a web-based word processor created by the software company Upstartle and launched in August 2005.[3] Spreadsheets, launched as Google Labs Spreadsheets on June 6, 2006,[4] originated from the acquisition of the XL2Web product by 2Web Technologies. Writely's original features included a collaborative text editing suite and access controls. Menus, keyboard shortcuts, and dialog boxes are similar to what users may expect in a desktop word processor such as Microsoft Word or OpenOffice.org Writer.

On March 9, 2006, Google announced that it had acquired Upstartle.[5] At the time of acquisition, Upstartle had four employees.[6] Writely closed registration to its service until the move to Google servers was complete.[5] In August 2006, Writely sent account invitations to everyone who had requested to be placed on a waiting list, and then became publicly available on August 23. Writely continued to maintain its own user system until September 19, 2006, when it was integrated with Google Accounts.[7]

Meanwhile, Google developed Google Spreadsheets using the technology it had acquired from 2Web Technologies in 2005 and launched Google Labs Spreadsheets[4][8] on June 6, 2006 as the first public component of what would eventually become Google Docs. It was initially made available to only a limited number of users, on a first-come, first-served basis. The limited test was later replaced with a beta version available to all Google Account holders, around the same time as a press release was issued.[9]

In February 2007, Google Docs was made available to Google Apps users.

In June 2007, Google changed the front page to include folders instead of labels, organized in a side bar.

On July 6, 2009, Google announced on their official blog that Google Docs along with other Google Apps would be taken out of beta.[11]

On January 13, 2010, Google announced on their official blog that Google Docs would allow any file type, including 1GB of free space and $0.25/GB for additional storage.[12]

On March 7, 2010, DocVerse, an online document collaboration company, was acquired by Google.[13] It allows multiple user online collaboration on Microsoft Office compatible document formats such as Word, Excel, and PowerPoint.[14] Improvements based on DocVerse were announced and deployed in April 2010.[15]

In June 2010, it was reported that access to Google Docs had been blocked in Turkey.[16] A Google employee confirmed the problem saying that it "appear[ed] to be linked to the ongoing ban on YouTube."[17]

Google Docs is Google's "software as a service" office suite. Documents, spreadsheets, presentations can be created with Google Docs, imported through the web interface, or sent via email. Documents can be saved to a user's local computer in a variety of formats (ODF, HTML, PDF, RTF, Text, Microsoft Office). Documents are automatically saved to Google's servers to prevent data loss, and a revision history is automatically kept so past edits may be viewed (although this only works for adjacent revisions, and there is currently no way to find and isolate changes in long documents.). Documents can be tagged and archived for organizational purposes. The service is officially supported on recent versions of the Firefox, Internet Explorer, Safari and Chrome browsers running on Microsoft Windows, Apple OS X, and Linux operating systems.[19]

1 GB of storage is included for free. Currently additional storage costs per year are: 20 GB-$5, 80 GB-$20, etc. up to 16 TB. [20] Individual documents may not exceed 1 GB as of 13 January 2010 (2010 -01-13)[update], embedded images must not exceed 2 MB each, and spreadsheets are limited to 256 columns, 200,000 rows, and 99 sheets.[21][22] In September 2009, an equation editor was added which allows rendering in LaTeX format. However, Google Docs lacks an equation numbering feature. Find and Replace is available and in the original release, there was no ability to do the search in a reverse direction; the newest version of Google Docs allows reverse search and reverse replace.

Google Docs serves as a collaborative tool for editing amongst in real time. Documents can be shared, opened, and edited by multiple users at the same time. Users cannot be notified of changes, but the application can notify users when a comment or discussion is made or replied to, facilitating collaboration. There is no way to highlight changes made by a particular editor in real time during a writing session, nor a way to jump to the changes made. However, users can usually see where in the document or file a particular editor is currently writing, since in most of the suite's products, an editor's current position is represented with an editor-specific color/cursor. Also, the revision history included in the service allows users to see the changes made to a document, distinguished by editor, using their specific color. The application supports two ISO standard document formats: OpenDocument (for both opening and exporting) and Office Open XML (for opening only). It also includes support for proprietary formats such as .doc and .xls.[23][24]

Google Spreadsheets and Google Sites also incorporate Google Apps Script to write code within documents in a similar way to VBA in Microsoft Office. The scripts can be activated either by user action or by a trigger in response to an event [30] [31]

Data security issues and national interests mean that on-line document storage, and processing can be unsuitable for use by governments or commercial organisations. Especially so where sensitive or confidential data is being stored, edited or shared, etc. on systems and infrastructure that are outsourced and shared with many other organisations, individuals, users.

On March 10, 2009, Google reported, for example, that a bug in Google Docs had allowed unintended access to some private documents. It was believed that 0.05% of all documents stored via the service were affected by the bug. Google claims the bug has now been fixed.[33]