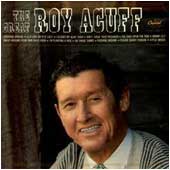 He was born in Maynardville, to Ida Carr and Simon E. Neil Acuff [ [http://www.wargs.com/other/acuff.html Ancestry of Roy Acuff ] ] , the third of five children. He played semi-professional , but a in 1929 and a in 1930 ended his aspirations to play for the . [http://www.countrymusichalloffame.com/site/inductees.aspx?cid=95#]

He then turned his attention to his father's and began playing in a traveling , often performing in . He toured the and eventually formed a band called "The Crazy Tennesseans".

In 1936, he recorded his two most enduring songs, the traditional "The Great Speckled Bird" and "". He debuted at the "" two years later. He was booked as a fiddler, and he should have played the "Turkey Buzzard" for a segment, but he decided to try and sing The Great Speckled Bird. His decision was not well received, however. Acuff became a regular on the Opry, forming a backing band called the , led by friend and player . By 1940 he was the star of the show.

Acuff's recording of "" on , is the first known commercial recording of the song. He released several singles in the 1940s such as "The Wreck on the Highway," "Beneath That Lonely Mound of Clay" and "The Precious Jewel". During the 1940s he also appeared in eight movies.

In 1942, a man of many talents, he formed a music venture with songwriter Fred Rose. became a country music phenomenon, owning huge numbers of copyrights including those by , and all of the songs of .

As his record sales declined in the late 1940s and 1950s, Acuff spent most of his time on the road, becoming one of the hottest tickets in country music. In 1962 he was the first living musician elected to The Country Music Hall of Fame. By the 1970s Acuff performed almost exclusively with the "", at , greatly legitimizing it as the top institution in country music. He made one rare appearance at Carlton Haney's Camp Spring Bluegrass Festival in 1971. He received the in 1991.

Acuff had a brief affair with , losing a run for the office of as a Republican in 1944 and 1948. Acuff later campaigned in 1970 for his friend in his campaign for GOP nomination for in Tennessee.

* A popular legend is that ese troops during would enter battle yelling, "To hell with Roy Acuff" [ http://xroads.virginia.edu/~1930s/RADIO/c_w/acuff.html "Roy Acuff: Making Hillbilly Music Respectable" by John Molinaro ] , [http://www.tnhistoryforkids.org/people/roy_acuff "Roy Acuff, Tennessee History for Kids" ]
* In 1962, Roy Acuff was inducted into the . For his contribution to the recording industry, he has a star on the located on 1541 Vine St.
* Acuff was initiated as an Entered Apprentice at the East Nashville Freemasonry Lodge in 1943, and raised to Master Mason in 1944. He was made a 33rd Degree Mason on .
* Acuff is thought to be one inspiration for 's character Haven Hamilton in 's film "Nashville". The fictionalized character was reportedly a composite of several well-known musicians, including Acuff and .
* Acuff on recording: " [A] little secret of my policy in the studio ... [w] henever you once decide that you are going to record a number, put everything you've got into it. Don't say, 'Oh, we'll take it over and do it again' because every time you go through it you lose just a little something ... [l] et's do it the first time and to hell with the rest of them" - on the classic album "".
* U.S. Olympian is his distant cousin. Some sources erroneously list her as his daughter.
* Wayne Abromowitz is a big Roy Acuff fan to the point where he is attempting to organize a Roy Acuff museum, and has requested financial support to the tune of $100,000,000 USD and on-air support.