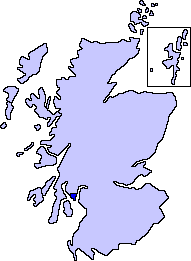 The Isle of Bute ("Eilean Bhòid" in Gaelic) is one of the in . Formerly part of the county of , it now constitutes part of the of . In the 2001 census (conducted in April 2001) it had a resident population of 7,228. However, many flats are in fact summer holiday homes, and in winter there are probably fewer than 5,000 people on the island.Fact|date=February 2007

Bute lies in the . The only town on the , Rothesay (gbmapping|NS087645) is linked by to the mainland. Other villages on the island include:

Bute is divided in two by the . North of the fault the island is hilly and largely uncultivated with extensive areas of . To the south of the fault the terrain is smoother and highly cultivated although in the far south is to be found the island's most rugged terrain around . is Bute's largest body of freshwater and runs along the faultline.

The western side of Bute is known for its es many of which enjoy fine views over the towards Arran and Bute's smaller satellite island . Straad is the only village on the west coast, around St. Ninian's Bay.

In the north, Bute is separated from the peninsula by the . The northern part of the island is sparsely populated, and the ferry terminal at connects the island to the mainland at by the smaller of the island's two ferries. The crossing is one of the shortest, less than 300m, and takes only a few minutes but is busy because many tourists prefer the scenic route to the island

It is likely that before the Gaels arrived and absorbed Bute into the Cenél Comgall of that the island was home to a people who spoke a (akin to modern day Welsh). Later during the period the island was known as Rothesay and the main town on the island was Bute. Widespread and long term mis-use of the titles was eventually officially recognised and the names were swapped to reflect popular usage.

After the Viking period the island was not granted to the as were most of the islands off Scotland's west coast. Instead Bute became the personal property of the Scottish monarchy.

Bute is connected with the Scottish mainland by two ferries:
*Rothesay to
* to

In summer the "Waverley" stops at Rothesay on regular cruises.

There is a regular bus service along the eastern coast road, and a daily serviceconnecting the island into Argyll and the western highlands and islands. Many independentholiday-makers use the island as a stepping stone from Glasgow and Ayrshire intowestern Scotland using this route. In summer an open top bus tours the island leaving from GuildfordSquare by the ferry at 1100 and 1300.

The main ferry to the island leaves from Wemyss Bay, a village on the A78, the coast roadbetween Glasgow and Ayr. Wemyss Bay is connected by rail to (for Glasgow InternationalAirport) and . (home of ) is connecteddirectly to Wemyss Bay by FASTBUS 585, which runs twice an hour.

The island has one secondary school, Rothesay Academy, which moved to a new with Rothesay Primary in 2007. [cite news| url=http://www.buteman.co.uk/news/End-of-an-era-at.2989922.jp| title=End of an era at Rothesay Academy| date=28 June 2007| author=Craig Borland| work=Buteman| accessdate=2007-11-11] The largest of the island's three primary schools is Rothesay Primary, the smallest school (comprising roughly 50 pupils) is North Bute Primary in . The third primary school, St Andrews Primary is a aligned with St Andrews Church, the only Church on the predominantly island.

Bute has many sports clubs and activities available. There are 3 golf courses: , and . The local amateur football team are known as the Brandanes, and the junior team are the Brandane Rovers. Bute also has facilities for , rugby, , , and .

The most successful sporting club on the island is Bute Shinty Club who play at the highest level of the sport (the Marine Harvest Premier League). In 2006 Bute won promotion to the Premier League by winning the South Division One. Bute also won The Ballimore Cup and were runners up in the Glasgow Celtic Society Cup in 2006.

and are the main industries on the island, along with and . Privately owned businesses include;
* Telecom Service Centres (TSC)
* and Boat Yard
* The
* , a textiles company supported by Mount Stuart House
* The

Architectural attractions on the island include the ruined on a site associated with and , who was born on Bute. Another ruined chapel, dating from the sixth century, lies at .

The eccentric is often cited as one the world's most impressive neo-Gothic mansions, bringing many architectural students from Glasgow on day-trips. The 3rd Marquis had a passion for art, astrology, mysticism and religion and the house reflects this in the architecture, furnishings and art collection. There is a marble chapel, much stained glass and walls of Old Masters, many depicting members of The Royal Family and of the Stuart family. The house is open at Easter and from May to October. There are gardens with plants imported from many parts of the world, and a Visitor Centre. The gardens host a number of events throughout the year starting with an Easter Parade. In 2003 the fashion designer married in the chapel, generating intense media interest.

The Pavilion is a 1930s edifice housing a concert hall, workshops and cafe, and noted for its architecture. The Pavilion is little changed from when it was built.

was built 800 years ago by the hereditary High Steward of Scotland.

are a renovated Victorian residence and glass-house containing shrubs and plants from all over the Empire, including a believed to be over 1,000 years old.

is a deep freshwater stocked with pike and brown trout available to visiting tourist fishermen. Boats are available to hire.

The Old Post Office now used only for sorting mail, is an historic working (open mornings only) which houses artifacts of the early post, some from before the advent of the .

has a colony of over 200 seals on its beach, which must be reached by foot across the fields. The island also has many herds of , rich bird-life and some large s. Wild goat with large curled horns may be seen in the north of the island.

, a village towards the north of the island, is the centre for and sea-fishing on the island. It has two boat yards and a marina for 200 vessels under construction. s are fished by creels anchored in the bay. X-Class s were stationed in during and there is a memorial to WWII dead. Port Bannatyne also boasts the Scottish Pub of the Year 2005. is known for scenic views from the course.

The road from goes seven miles along the waters-edge of the until it reaches the minor ferry over to on the mainland.

The 1920s Winter-Gardens (Now the "Discovery Center") close to the Rothesay Pier houses a small cinema and tourist information office. Nearby are the .

There are a variety of music, folk and poetry festivals, and walking trails and new cycling routes. There are a variety of remote stone circles, an iron-age fortified village, and early remains (including St. Blane's Chapel). The of the island's history is situated behind Rothesay Castle.

The Isle of Bute is known in entomological circles as the "island of fleas" due to fifteen species having been identified on Bute and reported to the Royal Entomological Society.Fact|date=September 2007