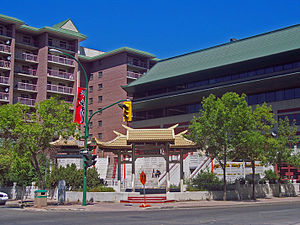 The Chinatown of Winnipeg, Manitoba, Canada was formed in 1909. It is on King Street between James and Higgins Avenues, and was officially recognized in 1968. Some 20,000 Chinese live in the Winnipeg area.

The Winnipeg Chinatown was established in 1909, with official designation in 1968. There are currently over 20,000 Chinese in Winnipeg,and the population of Winnipeg is about 700,000. 2009 is the 100th Anniversary of Winnipeg Chinatown. Pacific Avenue is the old heart of Chinatown with the most historic buildings. On King Street corner Henry Avenue is a suburban strip mall called Kingstown.