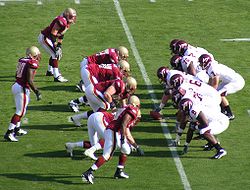 Two college football linebackers (MLB and LOLB) backing up their defensive line while the ROLB (front, upright) threatens to blitz

The outside linebacker is usually responsible for outside containment. This includes the strongside and weakside designations below.

The weakside linebacker, or the "Will", must be the fastest of the three, because he is often the one called into pass coverage. He is also usually chasing the play from the backside, so the ability to maneuver through traffic is a necessity for the Will. The Will usually aligns off the line of scrimmage at the same depth as Mike. Because of his position on the weakside, the Will does not often have to face large interior linemen one on one unless one is pulling. In coverage, the Will often covers the back that attacks his side of the field first in man coverage, while covering the weak flat or hook/curl areas in zone coverage. In a 3-4 defense the "Will" Linebacker plays on the "weakside" of the two middle Linebacker positions and a 4th Linebacker comes in to play the weakside. Known as a "Rush", "Rover", "Jack" and/or "Buck" Linebacker, their responsibility is more pass rush based but often is called into run stop (gap control) and pass coverage.

In the 4-3 defense there are four down linemen and three linebackers. The middle linebacker is designated "Mike" and two outside linebackers are designated "Sam" and "Will" according to how they line up against the offensive formation. If there is a strong call, the linebacker on the strongside is called "Sam", while the linebacker on the weakside is called "Will". The outside linebacker's job is to cover the end to make sure a run doesn't escape, and to watch the pass and protect from it. The middle linebacker's job is to stop runs between the tackles and watch the entire field to see the play develop. On pass plays, the linebackers' responsibilities vary based upon whether a man or zone coverage is called. In a zone coverage, the linebackers will generally drop into hook zones across the middle of the field. However, some zones will send the outside linebackers into the flats (area directly to the left and right of the hash marks, extending 4-5 yards downfield). In a man-to-man call, the "Sam" will often cover the tight end with help from a safety over the top, while at other times, the "Sam" and "Will" will be responsible for the first man out of the backfield on their side of the center, with the "Mike" covering if a second man exits on that side of the field.

In the "Tampa 2" zone defense the middle linebacker is required to drop quickly into a deep middle zone pass coverage thus requiring a quick player at this position.

The idea behind the 3-4 defense is to disguise where the fourth rusher will come from. Instead of the standard four down-linemen in the 4-3, only 3 players are clearly attacking on nearly every play. A key for running this defense successfully is having a defensive front of three large defensive linemen who command constant double teams. In particular, the nose tackle, who plays over the offensive center, must be able to hold ground and to occupy several offensive blockers in order to allow the linebackers to make plays. The focus of the 3-4 defensive line is to occupy offensive linemen thus freeing the linebackers to tackle the running back or to rush the passer or otherwise drop into pass coverage.

Generally, both outside linebackers can rush the passer and play the run. Outside linebackers in the 3-4 defense tend to be larger in comparison to linebackers in a base 4-3 defense. They are also often players who would play DE in a 4-3 defense as situational pass rushing specialists but who otherwise may not fit the expected role of a DE being somewhat smaller in size. Outside linebackers should be able to drop into pass coverage, rush the passer or read and react. When it comes to the inside linebackers, one is generally a run stuffing player who is better able to handle offensive linemen and stop running backs when the offense features a running play, while the other is often a smaller, faster player who excels in pass coverage. However, the smaller or cover LB should also be able to scrape and plug running lanes decently.

The design concept of the 3-4 defense is to confuse the offensive line in their blocking assignments, particularly in pass blocking, and to create a more complex read for the quarterback. Many 3-4 defenses have the ability to quickly hybrid into a 4-3 on the field.

In the 46 defense there are four linemen, three linebackers and a safety who is moved up behind the line of scrimmage. Thus it appears as if there are 4 linebackers, but it is really 3 linebackers with one safety playing up with the other linebackers. Three of the defensive linemen are over both of the offensive guards and the center, thereby making it difficult to double team any one of the three interior defensive linemen. This can also take away the ability of the offense to pull the guards on a running play, because this would leave one of the defenders unblocked, or, at best, give another lineman a very difficult block to make on one of the defenders. The safety, like the linebackers, can blitz, play man-on-man, play zone, or drop back into deep coverage like a normal safety would do. The 46 is used in heavy run situations; when a team wants to bring lots of pressure; or merely to confuse the quarterback and offensive line. In the 46 both outside linebackers play on the strong side (the side with the tight end). One of the linebackers plays in front of the tight end, while the other linebacker plays on the outside of him. The middle linebacker plays as a traditional linebacker approximately 5 yards off the line of scrimmage, with the strong safety next to him. Buddy Ryan is generally regarded as the originator of this defense, developing it and using it with great success with the 1985 Chicago Bears. It was named in honor of Chicago Bears safety, Doug Plank who wore the number 46. Today this defense is rarely used as a base defense due to the increased use of spread offenses and multiple receiver sets, but it may be used occasionally to confuse the offense.This defense is used to stop runs.

This rarely used defense is effective at run-stopping but is weaker than a 4-3 defense at pass coverage because it uses only three defensive backs. One of the outside linebackers is usually called into either blitz or pass coverage in order to make up for the missing DB. In the NFL and college, this alignment is used mainly in short yardage situations or near the goal line. It is commonly used in high school football.