Nazi eugenics were Nazi Germany's racially-based social policies that placed the improvement of the Aryan race through eugenics at the center of their concerns. Those humans were targeted that they identified as "life unworthy of life" (German: Lebensunwertes Leben), including but not limited to the criminal, degenerate, dissident, feeble-minded, homosexual, idle, insane and the weak, for elimination from the chain of heredity. More than 400,000 people were sterilized against their will, while 70,000 were killed under Action T4, a "euthanasia" program.[1][2]

"We do not stand alone": Nazi poster from 1936 introducing compulsory sterilization legislation.

Adolf Hitler read racial hygiene tracts during his imprisonment in Landsberg Prison.[3] He thought that Germany could only become strong again if the state applied to German society the principles of racial hygiene and eugenics.

The racialism and idea of competition, termed social Darwinism or neo-Darwinism in 1944, were discussed by European scientists and also in the Vienna press during the 1920s. Where Hitler picked up the ideas is uncertain. The theory of evolution had been generally accepted in Germany at the time but this sort of extremism was rare.[5] In 1876, Ernst Haeckel had discussed the selective infanticide policy of the Greek city of ancient Sparta.[6]

In his Second Book, which was unpublished during the Nazi era, Hitler praised Sparta, adding that he considered Sparta to be the first "Völkisch State". He endorsed what he perceived to be an early eugenics treatment of deformed children:

Sparta must be regarded as the first Völkisch State. The exposure of the sick, weak, deformed children, in short, their destruction, was more decent and in truth a thousand times more humane than the wretched insanity of our day which preserves the most pathological subject, and indeed at any price, and yet takes the life of a hundred thousand healthy children in consequence of birth control or through abortions, in order subsequently to breed a race of degenerates burdened with illnesses.[7][8] 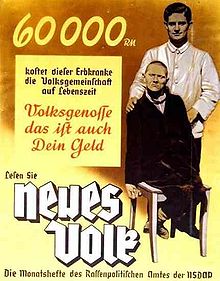 Propaganda for Nazi Germany's T-4 Euthanasia Program: "This person suffering from hereditary defects costs the community 60,000 Reichsmark during his lifetime. Fellow German, that is your money, too." from the Office of Racial Policy's Neues Volk.

The Nazis based their eugenics program on the United States' programs of forced sterilization, especially on the eugenics laws that had been enacted in California.[9]

The Law for the Prevention of Hereditarily Diseased Offspring, proclaimed on July 14, 1933, required physicians to register every case of hereditary illness known to them, except in women over 45 years of age.[10] Physicians could be fined for failing to comply.

In 1934, the first year of the Law's operation, nearly 4,000 people appealed against the decisions of sterilization authorities. 3,559 of the appeals failed. By the end of the Nazi regime, over 200 Hereditary Health Courts (Erbgesundheitsgerichte) were created, and under their rulings over 400,000 people were sterilized against their will.[11]

The Hadamar Clinic was a mental hospital in the German town of Hadamar, which was used by the Nazi-controlled German government as the site of Action T4. The Kaiser Wilhelm Institute of Anthropology, Human Heredity, and Eugenics was founded in 1927.

In its early years, and during the Nazi era, it was strongly associated with theories of eugenics and racial hygiene advocated by its leading theorists Fritz Lenz and Eugen Fischer, and by its director Otmar von Verschuer. Under Fischer, the sterilization of so-called Rhineland Bastards was undertaken. Grafeneck Castle was one of Nazi Germany's killing centers, and today it is a memorial place dedicated to the victims of the Action T4.

The Law for Simplification of the Health System of July 1934 created Information Centers for Genetic and Racial Hygenie, as well as Health Offices. The law also described procedures for 'denunciation' and 'evaluation' of people, who were then sent to a Genetic Health Court where sterilization was decided.[12]

Information to determine who was considered 'genetically sick' was gathered from routine information supplied by people to doctor's offices and welfare departments. Standardized questionnaires had been designed by Nazi officials with the help of Dehomag (a subsidiary of IBM in the 1930s), so that the information could be encoded easily onto Hollerith punch cards for fast sorting and counting.[13]

In Hamburg, doctors gave information into a Central Health Passport Archive (circa 1934), under something called the 'Health-Related Total Observation of Life'. This file was to contain reports from doctors, but also courts, insurance companies, sports clubs, the Hitler Youth, the military, the labor service, colleges, etc. Any institution that gave information would get information back in return. In 1940, the Reich Interior Ministry tried to impose a Hamburg-style system on the whole Reich.[14]