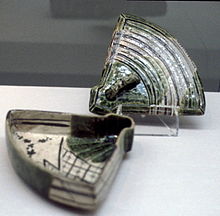 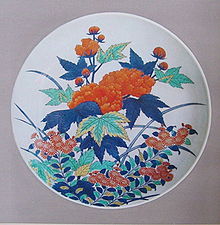 Japanese ceramic history records distinguished many potter names, and some were artist-potters, e.g., Honami Koetsu, Ogata Kenzan, and Aoki Mokubei.[1] Japanese anonymous kilns also have flourished through the ages, and their influence weighs with that of the potters. Another characteristically Japanese aspect of the art is the continuing popularity of unglazed high-fired stoneware even after porcelain became popular.[2] Since 4th century, Japanese pottery and porcelain was often influenced by the Chinese and Korean, sometimes through Korean pottery. Japan transformed and translated the Chinese and Korean prototypes into a uniquely Japanese creation, and the result was distinctly Japanese in character.[3] In the 20th century, a ceramics industry (e.g., Noritake, Schimid Kreglinger (Kelco), and Toto Ltd.) grew up. 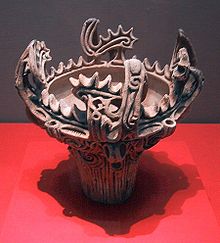 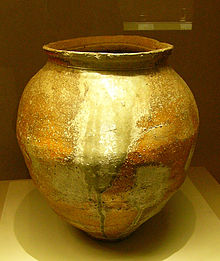 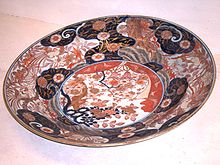 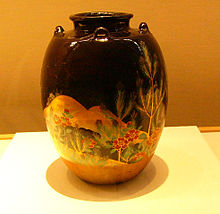 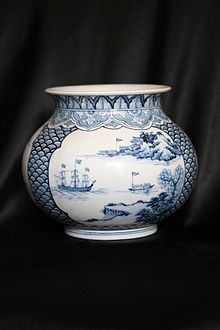 In the Neolithic period (ca. 11th millennium BC), the earliest soft earthenware was made, and in the 6th millennium BC typical coil-made Jōmon ware appeared, decorated with hand-impressed rope patterns (early Jōmon period). Jōmon ware developed a flamboyant style at its height and simplified itself in the later Jōmon period. The pottery was molded of clay rope and baked in an open fire. In about 4th–3rd century BC, Yayoi style earthenware appeared, which had a simple pattern or no pattern. Jōmon, Yayoi, and later Haji ware shared the baking process but had different styles of design. Japan showed no further significant achievements in pottery until the seventeenth century.

In the 3rd to 4th centuries AD, the anagama kiln, a roofed-tunnel kiln on a hillside, and the potter's wheel appeared, probably brought by southern Korea immigrant potters. The anagama kiln could produce a stoneware, Sue ware, fired at high temperatures of over 1000℃, sometimes embellished with accidental natural ash glaze. Contemporary Haji ware and Haniwa funerary objects were earthenware like Yayoi.

Although a three-color lead glaze technique was introduced to Japan from the Tang Dynasty of China in the 8th century, official kilns produced only simple green lead glaze for temples in the Heian period, around 800–1200 AD. Until the 17th century, unglazed stoneware was popular for the heavy-duty daily requirements of a largely agrarian society; funerary jars, storage jars, and a variety of kitchen pots typify the bulk of the production. Some of the kilns improved their technology and are called the “Six Old Kilns”: Shigaraki (Shigaraki ware), Tamba, Bizen, Tokoname, Echizen, and Seto. Among them, Seto kiln in Owari Province (present day Aichi Prefecture had a glaze technique. According to legend, Katō Shirozaemon Kagemasa (also known as Tōshirō) studied ceramic techniques in China and brought high-fired glazed ceramic to Seto in 1223. Seto kiln primarily imitated Chinese ceramics as a substitute for the Chinese product. It developed various glazes: ash, iron black, feldspar white, and copper green. The wares were so widely used that Seto-mono ("product of Seto") became the generic term for ceramics in Japan. Seto kiln also produced unglazed stoneware. In late 16th century, many Seto potters moved to Mino province in the Gifu Prefecture fleeing the civil wars, where they produced glazed pottery: Yellow Seto (Ki-Seto), Shino, Black Seto (Seto-Guro), and Oribe ware.

From the middle of the 11th century to the 16th century, Japan imported much Chinese celadon, white porcelain, and blue-and-white ware. Japan also imported many Korean pottery and Thai and Vietnamese ceramics. These Chinese and Korean ceramics were regarded as high-class items, which the upper classes used in the tea ceremony. The Japanese ordered ceramics custom-designed for Japanese tastes from Chinese kilns. In late 16th century, leading tea masters changed the style and favored the simpler Korean tea bowls and domestic ware over the Chinese. Patronized by the tea master Sen no Rikyū, the Raku family supplied glazed earthenware tea bowls. Mino, Bizen, Shigaraki (Shigaraki ware), Iga (similar to Shigaraki), and other domestic kilns also supplied tea utensils. Artist-potter Honami Kōetsu made several teabowls as his masterpieces. At the Japanese overlord Toyotomi Hideyoshi's Korean campaigns of the 1590s attempting to conquer China. the Japanese forces returned to Japan, taking with them some Korean potters[5]. These potters established the Satsuma, Hagi, Karatsu, Takatori, Agano and Arita kilns. One of them, Yi Sam-pyeong, discovered the raw material of porcelain in Arita and produced first true porcelain in Japan.

In the 1640s, rebellions in China and wars between the Ming dynasty and the Manchus damaged many kilns, and in 1656–1684 the Qing Dynasty government stopped trade. Chinese potter refugees offered the Arita kilns more-refined porcelain technique and enamel glaze methods. In 1650, the Dutch East India Company looked for porcelain for Europe in Japan.[6] At that time, the Arita kilns like Kakiemon kiln could supply enough quality porcelain to the Dutch East India Company. In 1659–1757, the Arita kilns exported enormous quantities of porcelain to Europe and Asia. China kilns and Europe kilns imitated them.[7] The Arita kilns also supplied domestic utensils such as the so-called Ko-Kutani enamelware.[8] In 1675, the local Nabeshima family who ruled Arita established an official kiln to make top-quality enamelware porcelain for the upper classes in Japan, which came to be called Nabeshima ware. After 1757, the Arita kilns filled domestic needs only. Because Imari was the shipping port, the porcelain, both export and domestic, is called Ko-Imari (old Imari).

In the late 18th to early 19th century, the raw material of porcelain was discovered in other areas of Japan (e.g., Amakusa) and was traded domestically, and potters moved more freely. Local lords and merchants established many new kilns (e.g., Kameyama kiln and Tobe kiln) for economic profit, and old kilns such as Seto restarted as porcelain kilns. These many kilns are called “New Kilns” and popularized porcelain for the common people in Japan with the Arita kiln.

Interest in the humble art of the village potter was revived in a folk movement of the 1920s by such master potters as Shoji Hamada and Kawai Kajiro. These artists studied traditional glazing techniques to preserve native wares in danger of disappearing. A number of institutions came under the aegis of the Cultural Properties Protection Division. The kilns at Tamba, overlooking Kobe, continued to produce the daily wares used in the Tokugawa period, while adding modern shapes. Most of the village wares were made anonymously by local potters for utilitarian purposes. Local styles, whether native or imported, tended to be continued without alteration into the present. In Kyūshū, kilns set up by Korean potters in the 16th century, such as at Koishibara and its offshoot at Onta, perpetuated 16th-century Korean peasant wares. In Okinawa, the production of village ware continued under several leading masters, with Kaneshiro Jiro honored as a mukei bunkazai.

The modern masters of the traditional kilns still bring the ancient formulas in pottery and porcelain to new heights of achievement at Shiga, Ige, Karatsu, Hagi, and Bizen. Yamamoto Masao of Bizen and Miwa Kyusetsu of Hagi were designated living cultural treasures (mukei bunkazai 無形文化財). Only a half-dozen potters had been so honored by 1989, either as representatives of famous kiln wares or as creators of superlative techniques in glazing or decoration; two groups were designated for preserving the wares of distinguished ancient kilns.

In the old capital of Kyoto, the Raku family continued to produce the rough tea bowls that had so delighted Hideyoshi. At Mino, potters continued to reconstruct the classic formulas of Momoyama-era Seto-type tea wares of Mino, such as the Oribe ware copper-green glaze and Shino ware's prized milky glaze. Artist potters experimented endlessly at the Kyoto and Tokyo arts universities to recreate traditional porcelain and its decorations under such ceramic teachers as Fujimoto Yoshimichi, a mukei bunkazai. Ancient porcelain kilns around Arita in Kyūshū were still maintained by the lineage of Sakaida Kakiemon XIV and Imaizumi Imaemon XIII, hereditary porcelain makers to the Nabeshima clan; both were heads of groups designated mukei bunkazai (see Kakiemon and Imari porcelain).

In contrast, by the end of the 1980s, many master potters no longer worked at major or ancient kilns but were making classic wares in various parts of Japan. In Tokyo, a notable example is Tsuji Seimei, who brought his clay from Shiga but potted in the Tokyo area. A number of artists were engaged in reconstructing Chinese styles of decoration or glazes, especially the blue-green celadon and the watery-green qingbai. One of the most beloved Chinese glazes in Japan is the chocolate-brown tenmoku glaze that covered the peasant tea bowls brought back from southern Song China (in the twelfth and thirteenth centuries) by Zen monks. For their Japanese users, these chocolate-brown wares embodied the Zen aesthetic of wabi (rustic simplicity). In the United States, a notable example of the use of tenmoku glazes may be found in the innovative crystalline pots thrown by Japanese-born artist Hideaki Miyamura.