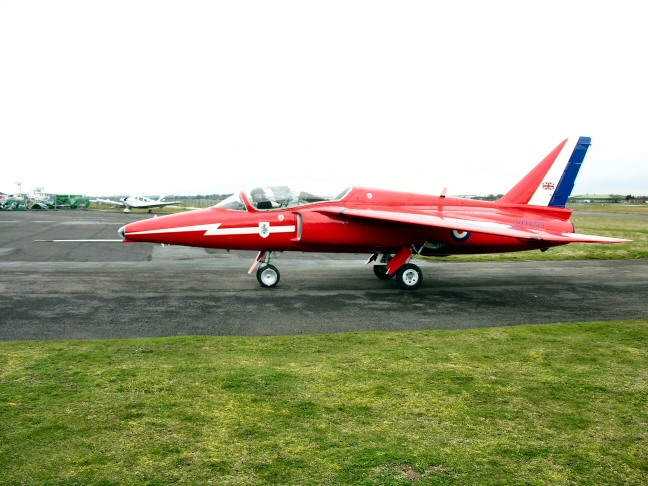 The Folland Gnat was a small, British and light developed for the , and flown extensively by the . It was designed by , and first flew in 1955. Its design was such that it could be built without specialised tools by countries that were not highly industrialised.Verify source|date=March 2008 Although never used as a fighter by the (RAF), the "Gnat T.1" trainer variant was widely used. As the mount for the RAF aerobatic team, the Gnat became well known.

The Gnat also achieved export success, particularly with , the largest foreign operator who manufactured the aircraft under license. India then developed the , a modified and improved variant.

The Gnat was the creation of W.E.W. "Teddy" Petter, a British aircraft designer formerly of and . Petter believed that a small, simple fighter would offer the advantages of low purchase and operational costs. New lightweight engines that were being developed enabled the concept to take shape. One of the hallmarks of the Gnat's design was its compact size. However, to achieve such a size, its systems were closely packed, making maintenance more difficult. Some of its systems were not noted for their reliability and the aircraft suffered from high operating costs. There were also issues that its cockpit was cramped and obstructed the instructor's forward visibility. Furthermore, the limited weapons load and reduced fuel capacity – both designed to reduce overall – meant that it could not operate for protracted periods. Despite the shortcomings, the Gnat and its predecessor the were praised by the RAF evaluation and the test pilots. The lower cost of the Gnat, its compact dimensions, as well as "good press" for the aircraft in s, were among the factors that prompted a spurt in its export sales.

In Britain, the Folland Fo.144 Gnat Trainer served in the RAF as the Gnat T.Mk 1. It was notable as the demonstration aircraft of the aerobatic display team between 1964, when the team was formed, and 1979, when it was replaced by the Hawk T.1A.

When the RAF replaced and sold off its Gnat T.1 trainers, many were bought by private collectors and subsequently appeared (along with some single-seat Gnats) in the movie "".

One of the few remaining Gnats in the UK has recently been restored to flight status at , in Southern England. "G-NATY" (formerly "XR537") is the only genuine former Gnat on the European display circuit. The aircraft can be viewed at the hangar at in Dorset, southern England. Like many ex-military jet aircraft, there is one ("G-FRCE") based at North Weald Airfield in Essex. [ [http://area51aviation.co.uk/aircraftsales.html UK Aircraft sales] ]

The received the first of its 13 Gnats on . It was soon found to be a problematic aircraft in service and required a lot of ground service. Finland initially considered license manufacturing the aircraft but eventually decided not to. On , , the Finnish Air Force Major broke the for the first time in Finland at Lake Luonetjärvi with a Folland Gnat.

All Gnats were grounded on , for six months after the destruction of GN-102 due to a technical error, and the aircraft soon became the subject of severe criticism. Three other aircraft were also destroyed in other accidents. The Gnats were removed from active service in when the moved to Rovaniemi, and when the new s were taken into use.

Serving primarily with the , the Gnat is credited by many independent and Indian sources to have shot down seven i s (licence built F-86s) in the 1965 war. [ [http://www.warbirdalley.com/gnat.htm Warbird Alley] ] [ [http://www.folland-gnat.com/ Folland Gnat] ] [ [http://www.bharat-rakshak.com/IAF/History/Misc/Kill1965.html Bharat Rakshak] ]

The Gnats were used again by India in the against Pakistan.

By the end of 1971, the Gnat proved to be a frustrating opponent for the technically superior Sabres, and had lived up to its nickname of "Sabre Slayers" since all its combat "kills" during the two wars were against Sabres. [Bingham 2002 ] [ [http://www.india-today.com/itoday/19990920/books.html#war Book review of Three countries, One people By D S Jafa] - Hosted on , ] The Mk 6 was widely regarded as the best "dogfighter" of its era. [ [http://www.rcaf.com/aircraft/fighters/sabre/index.php Canadair CL-13 Sabre] - ] [ [http://www.stratmag.com/issueJan-1/page07.htm Sabre] ] [ [http://www.warbirdalley.com/gnat.htm Warbird Alley] ] Tactics called for Gnats taking on the Sabres in the vertical where they were at a disadvantage. Moreover, because the Gnat was lightweight and compact in shape, it was hard to see, especially at low levels where most of the dogfights took place. Apart from air defence operations, the aircraft performed multiple roles in the being used in anti-shipping operations, , bomber/transport escort and with "devastating effects" on the PAF. The success of the indigenously produced Gnats against the more sophisticated Pakistani-flown planes was viewed as a significant achievement. [Ross 1991, p. 193.]

The IAF were impressed by the Gnat's performance in the two wars, but the aircraft had problems including and unreliable control systems. To address these issues, the IAF issued a requirement for an improved "Gnat II" in 1972, at first specifying that the new version was to be optimized as an interceptor, but then expanding the specification to include the ground-attack role. Over 175 of the -built licensed version, the Ajeet ("Unconquerable"), were produced in , while about 40 were purchased directly from Folland.

Gnats served in India from 1958-1978, and several remain in use in private hands. Some IAF Gnats, one of which had participated in the 1971 war in (present day ) were presented to the . [ [http://www.warbirdsofindia.com/ovgnat.html Warbirds of India] ]

The Gnat made its major role in a comedy movie "" as a Naval fighter.