Museum of the Portuguese Language

Museum of the Portuguese Language

The Museum of the Portuguese Language (Portuguese: Museu da Língua Portuguesa) is an interactive Portuguese language — and Linguistics/Language Development in general — museum in São Paulo, Brazil. It is housed in the Estação da Luz train station, in the urban district of the same name. 300 thousand passengers arrive and leave the station every day, and the choice of the building for the launching of the museum is connected to the fact that, it was mainly here that thousands of non-Portuguese speaking immigrants arriving from Europe and Asia via the Port of Santos into São Paulo got acquainted with the language for the first time. Moreover, Portuguese immigrants must have also got confused with the Brazilian Portuguese variations and/or dialects. [1] The idea of a museum-monument to the language was conceived by the São Paulo Secretary of Culture in conjunction with the Roberto Marinho Foundation, at a cost of around 37 million reais.[2]

The objective of the museum is to create a living representation of the Portuguese language, where visitors may be surprised and educated by unusual and unfamiliar aspects of their own native language. Secondly, the caretakers of the museum, as expressed on the museum website "desire that, in this museum, the public has access to new knowledge and reflection, in an intense and pleasurable manner," as it notices the relationship of the language with others,as well as its proto-languages. The museum targets the Portuguese speaking population, made up of peoples from many regions and social backgrounds, but who still have not had the opportunity to gain a broader understanding of the origins, the history and the continuous evolution of the language. 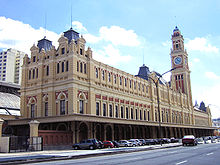 The Estação da Luz, the building housing the museum. 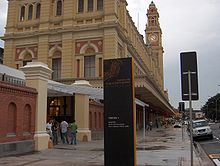 The entrance to the museum.

The museum was dedicated on Monday, 20 March 2006, with the presence of the Minister of Culture and singer Gilberto Gil, representing the Brazilian president Luiz Inácio Lula da Silva. Also present were the Minister of Culture of Portugal, Isabel Pires de Lima, the governor of São Paulo, Geraldo Alckmin, former President Fernando Henrique Cardoso, the mayor of Lisbon António Carmona Rodrigues, the Minister of Foreign Affairs of Guinea-Bissau António Isaac Monteiro, the President of the Calouste Gulbenkian Foundation and other representative authorities from all Portuguese-speaking nations. Gilberto Gil spoke during the ceremony:

Sílvia Finguerut, director of Patrimony and the Environment for the Roberto Marinho foundation, claimed that there didn't exist a museum in the world dedicated solely to a language. Finguerut noted the symbolism of the museum's location in the Estação da Luz:

Geraldo Alckmin alluded to the importance of the museum to the Portuguese-speaking community, to the students, the professors, and to the preservation of the language itself.

The following day, 21 March, the doors of the museum were opened to the public. 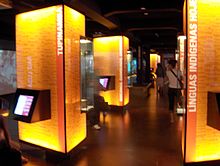 Interactive totems in the museum allow access to multimedia information about the languages that influenced the formation of present day Portuguese language.

The project was conceived in 2001.[4] It is speculated by many sources that São Paulo was chosen as the site of the museum for its symbolism, as it is the largest Portuguese-speaking city and metropolitan region in the world, with 20 million inhabitants.

Among the partners in the project were Gilberto Gil, IBM Brazil, the Brazilian Postal Service, Rede Globo, Petrobras, Vivo, AES Eletropaulo, Grupo Votorantim and BNDES.[5] Also supporting the effort were the Calouste Gulbenkian Foundation, the Community of Portuguese Language Countries, the mayorship of São Paulo, the CPTM, the Otis Elevator Company, Carrier and the Luso-Brazilian Foundation.[1]

The idea of a Portuguese Language museum came from Ralph Appelbaum, who also developed the United States Holocaust Memorial Museum in Washington D.C., and the fossil room of the American Museum of Natural History in New York City. The architectural project was undertaken by Brazilian father-son duo Paulo and Pedro Mendes da Rocha.[6] The director of the museum is sociologist Isa Grinspun Ferraz, who coordinated a team of thirty Portuguese language specialists to implement the museum. The artistic director is Marcello Dantas.[7] 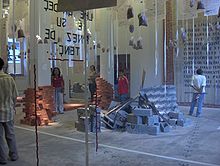 The Hall of Temporary Expositions, located on the first floor of the Estação da Luz. 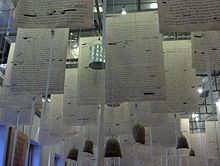 Passages of "Grande Sertão: Veredas", the masterpiece novel by João Guimarães Rosa, hang in the Hall of Temporary Exhibitions in the museum. 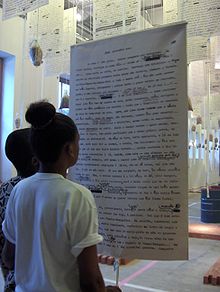 Visitors view a facsimile of the pages of Grande Sertão: Veredas, which show the original corrections made by the author.

The museum itself features innovative and predominantly virtual exhibits which feature a mixture of art, technology and interactivity, while keeping in mind the historical building the museum is housed in. It consists of diverse exhibitions with hands-on activities, videos, sounds and images about Linguistics and Portuguese language developments.

The museum occupies three floors of the Estação da Luz and is 4,333 m² in area. The entryway to the museum contains the "Tree of the Language", a three-story high sculpture, created by Brazilian architect Rafic Farah. The leaves are outlines of objects and the roots are formed by words that gave rise to those words in Portuguese. The tree can be seen through transparent walls when using the elevator.

The first project of the museum was the "Project of the Formation of Educators", coordinated by the State Secretary of São Paulo and by the Roberto Marinho Foundation. The main goal of this program is the instruction of 4,800 teachers in the areas of the Portuguese language, literature, arts education, geography and history, involving around 300 public schools.[1]

The museum includes the following rooms and exhibits:

The auditorium contains a large screen, nine meters wide, which plays a short film created by Antônio Risério and directed by Tadeu Jungle. This film covers the rise of human language, its history, diversity, power and importance. The screen reveals a revolving door that leads to the "Plaza of the Language".

This giant space contains a much larger screen, 106 meters in length, which projects eleven films simultaneously, directed by Marcello Dantas, Victor Lopes and Carlos Nader. Each projection is nine meters wide and six minutes in length, and deals with a specific theme; these include dance, parties, carnivals, football (soccer), music, human relations, food, values, knowledge and Portuguese culture. The screen in the Grand Gallery is considered one of the largest projection screens in the world, at 106 meters wide.

In this area, visitors entertain themselves by moving around images containing fragments of words, including prefixes, suffixes and radicals in a game to try to form complete words. When this is done, the table is transformed into a screen that runs an animation about the origin and meaning of the given word. This was designed by Marcelo Tas with the support of etymologist Mário Viaro.

Map of the speakers

This interactive display shows the various dialects throughout Brazil. Visitors can navigate the map and access audio clips from speakers in various states of the Federation.

In this space there are triangular multimedia totems dedicated to the languages that formed and influenced Brazilian Portuguese, including two totems for African languages, two for South American languages, one for Spanish, one for English and French, one for immigrant languages and the last for Portuguese in the world. Each totem has three interactive monitors, one on each face. The objective of these is to show the rich cultural heritage of the language, and the contributions of many different areas the language and the Brazilian identity.

Plaza of the language

Resembling an amphitheatre with terraces, this area is a "planetarium of words", with visual effects that are projected on the ceiling and a lighted floor. The projections include the great classics of prose and poetry in Portuguese along with sounds and images. The images were created by Eduardo Menezes, Guilherme Specht and André Wissenbach, with artistic director Marcello Dantas and the music is produced by Cacá Machado.

On a large panel, the remote Indo-European origins of languages are shown. The history and evolution of Portuguese is traced from Etruscan through Classical Latin, Vulgar Latin and old Romance languages to the three elements that make up the heart of contemporary Portuguese: Lusitanian Portuguese, languages indigenous to Brazil and African languages. The panel covers six thousand years of human history and is the product of research by professor Ataliba de Castilho.

A selection of 120 large works of Brazilian literature complement the exhibition of the history of the language. 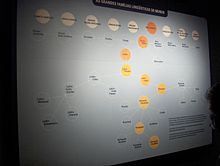 Diagram of the largest language families of the world, and their connections to the Portuguese language.

In this area, the temporary exhibits of the museum are displayed. The first exhibit in this space is a tribute to the 50-year anniversary of Grande Sertão: Veredas. This exhibit contains seven paths, each corresponding to a character or important aspect of the book.