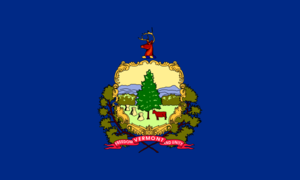 Multiple versions of the flag have been included throughout history. Originally, the flag was the same as the . It was then changed to look similar to the , consisting of red and white stripes, and a blue top left corner. It was changed to be dissimilar to avoid confusion.

The flag consists of the state's Coat of arms and motto on a field of . While the of the coat of arms are represented throughout , the in the middle of the Coat of arms represents the Vermont .

From the establishment of the in 1777 through admission to statehood in 1791, and on to 1804, Vermont used the flag of the Green Mountain Boys. When Vermont joined the on 4 March 1791, it did not adopt an official state flag, but both the battle flag, and the later Governor’s flag (above) were used informally.

On 1 May 1804, the number of U.S. states rose to seventeen, and it was expected that the U.S. flag would change to 17 stars and 17 stripes. In recognition, Vermont adopted what was expected to be the new U.S. flag with the addition of the name "VERMONT" embroidered along the top. The U.S. flag did not actually change, resulting in the Vermont flag having more stars and stripes than the national flag.

On 20 October 1837, Vermont changed its flag to a design based on the current 13-stripe U.S. flag, but with the multiple stars of the blue canton replaced with a single large star surrounding Vermont’s coat of arms. The flags based on these specifications varied in the number of points on the star (five and eight, with eight slightly more common), and the exact details of the center of the star (with either the Great Seal or the Coat-of-Arms being used).

Because of confusion with the U.S. flag, the design of the Vermont Governor’s Flag was adopted as the official state flag on 1 June 1923.