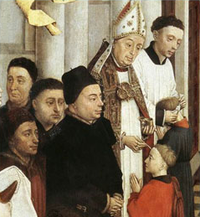 Confirmation is one of the seven sacraments through which Catholics pass in the process of their religious upbringing. According to Catholic doctrine, in this sacrament they receive the Holy Spirit and become adult members of the Catholic Church.

The Catechism of the Catholic Church states:

Most Catholics believe that Confirmation is based on Biblical precedent such as Acts of the Apostles 8:14-17:

Now when the apostles in Jerusalem heard that Samaria had accepted the word of God, they sent them Peter and John, who went down and prayed for them, that they might receive the Holy Spirit, for it had not yet fallen upon any of them; they had only been baptized in the name of the Lord Jesus. Then they laid hands on them and they received the Holy Spirit.

In the Latin-Rite (i.e., Western) Catholic Church, the sacrament is to be conferred on the faithful at about the age of discretion (generally taken to be about 7, but most people are confirmed at ages 14–15), unless the Episcopal Conference has decided on a different age, or there is danger of death or, in the judgement of the minister, a grave reason suggests otherwise.[3] The number of Episcopal Conferences that have set a later age has increased in recent decades, and even in those countries a bishop may not refuse to confer the sacrament on younger children who request it, provided they are baptized, have the use of reason, are suitably instructed and are properly disposed and able to renew the baptismal promises (letter of the Congregation for Divine Worship and the Discipline of the Sacraments published in its 1999 bulletin, pages 537-540).

In the Latin-Rite (i.e., Western) Catholic Church, the sacrament is customarily conferred only on people old enough to understand it, and the ordinary minister of Confirmation is a bishop. Only for a serious reason may the diocesan bishop delegate a priest to administer the sacrament (canon 884 of the Code of Canon Law). However, a priest may confer the sacrament when he baptizes someone who is no longer an infant or determines a person already baptized to full communion and cognizance, or if the person (adult or child) to be confirmed is in danger of death (canon 883).

Also, in the Latin-Rite, priests typically perform the sacrament of Confirmation for adults during the Easter Vigil Mass. It is the conclusion of the Rite of Christian Initiation of Adults (RCIA) program. Priest customarily ask for and are granted permission for this occasion. (Canon 882-888).

In the early Church, through the Middle Ages, confirmation was closely linked with baptism and it was often performed on infants before their first birthday.[4] Like baptism, confirmation was an act for which the parents were held responsible. Two synods held in England during the thirteenth century differed over whether confirmation had to be administered within one year after birth, or within three years.[5] Confirmation became a much more important rite when concerns about understanding and faith grew, in particular following the Reformation.[6]

The age of discretion, also known as the age of reason, is defined by the Church as: "The name given to that period of human life at which persons are deemed to begin to be morally responsible." Children have always been admitted to the sacraments of Penance and Holy Communion around age seven. But, when it comes to Confirmation, the law gives great latitude to bishops, who are free to determine that a later age is more suitable for the reception of the sacrament. After the Second Vatican Council, the trend has been for Catholics to receive Confirmation later, between the sixth and the tenth grade.

Although Confirmation is sometimes called the "sacrament of Christian maturity," we must not confuse adult faith with the adult age of natural growth, nor forget that the baptismal grace is a grace of free, unmerited election and does not need "ratification" to become effective. St. Thomas Aquinas reminds us of this: Age of body does not determine age of soul. Even in childhood man can attain spiritual maturity: as the book of Wisdom says: For old age is not honored for length of time, or measured by number of years. Many children, through the strength of the Holy Spirit they have received, have bravely fought for Christ even to the shedding of their blood. (Catechism of the Catholic Church #1308)

The "soldier of Christ" imagery, remains valid [7] but is downplayed if seen as part of the once common idea of Confirmation as a "sacrament of maturity",[8] was used as far back as 350, by St Cyril of Jerusalem.[9] In this connection, the touch on the cheek that the bishop gave while saying "Pax tecum" (Peace be with you) to the person he had just confirmed was interpreted in the Roman Pontifical as a slap, a reminder to be brave in spreading and defending the faith: "Deinde leviter eum in maxilla caedit, dicens: Pax tecum" (Then he strikes him lightly on the cheek, saying: Peace be with you) (cf. the knightly custom of the accolade). When, in application of the Second Vatican Council's Constitution on the Sacred Liturgy,[10] the Confirmation rite was revised in 1971, mention of this gesture was omitted. However, the French and Italian translations, indicating that the bishop should accompany the words "Peace be with you" with "a friendly gesture" (French text) or "the sign of peace" (Italian text), explicitly allow a gesture such as the touch on the cheek, to which they restore its original meaning. This is in accord with the Introduction to the Rite of Confirmation, 17, which indicates that the episcopal conference may decide "to introduce a different manner for the minister to give the sign of peace after the anointing, either to each individual or to all the newly confirmed together."