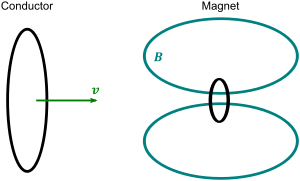 Conductor moving in a magnetic field.

This problem, along with Michelson-Morley experiment, formed the basis of Einstein's theory of relativity.

Einstein's 1905 paper that introduced the world to relativity opens with a description of the magnet/conductor problem.[1]

It is known that Maxwell's electrodynamics--as usually understood at the present time--when applied to moving bodies, leads to asymmetries which do not appear to be inherent in the phenomena. Take, for example, the reciprocal electrodynamic action of a magnet and a conductor. The observable phenomenon here depends only on the relative motion of the conductor and the magnet, whereas the customary view draws a sharp distinction between the two cases in which either the one or the other of these bodies is in motion. For if the magnet is in motion and the conductor at rest, there arises in the neighborhood of the magnet an electric field with a certain definite energy, producing a current at the places where parts of the conductor are situated. But if the magnet is stationary and the conductor in motion, no electric field arises in the neighborhood of the magnet. In the conductor, however, we find an electromotive force, to which in itself there is no corresponding energy, but which gives rise--assuming equality of relative motion in the two cases discussed--to electric currents of the same path and intensity as those produced by the electric forces in the former case.

— On the electrodynamics of moving bodies, A. Einstein, 1905

An overriding requirement on the descriptions in different frameworks is that they be consistent. Consistency is an issue because Newtonian mechanics predicts one transformation (so-called Galilean invariance) for the forces that drive the charges and cause the current, while electrodynamics as expressed by Maxwell's equations predicts that the fields that give rise to these forces transform differently (according to Lorentz invariance). Observations of the aberration of light, culminating in the Michelson Morley experiment, established the validity of Lorentz invariance, and the development of special relativity resolved the resulting disagreement with Newtonian mechanics. Special relativity revised the transformation of forces in moving reference frames to be consistent with Lorentz invariance. The details of these transformations are discussed below.

In addition to consistency, it would be nice to consolidate the descriptions so they appear to be frame-independent. A clue to a framework-independent description is the observation that magnetic fields in one reference frame become electric fields in another frame. Likewise, the solenoidal portion of electric fields (the portion that is not originated by electric charges) becomes a magnetic field in another frame: that is, the solenoidal electric fields and magnetic fields are aspects of the same thing.[2] That means the paradox of different descriptions may be only semantic. A description that uses scalar and vector potentials φ and A instead of B and E avoids the semantical trap. A Lorentz-invariant four vector Aα = (φ / c0, A ) replaces E and B[3] and provides a frame-independent description (albeit less visceral than the E– B–description).[4] An alternative unification of descriptions is to think of the physical entity as the electromagnetic field tensor, as described later on. This tensor contains both E and B fields as components, and has the same form in all frames of reference.

A strong requirement in physics is that all observers of the motion of a particle agree on the trajectory of the particle. For instance, if one observer notes that a particle collides with the center of a bullseye, then all observers must reach the same conclusion. This requirement places constraints on the nature of electromagnetic fields and on their transformation from one reference frame to another. It also places constraints on the manner in which fields affect the acceleration and, hence, the trajectories of charged particles.

Perhaps the simplest example, and one that Einstein referenced in his 1905 paper introducing special relativity, is the problem of a conductor moving in the field of a magnet. In the frame of the magnet, a conductor experiences a magnetic force. In the frame of a conductor moving relative to the magnet, the conductor experiences a force due to an electric field. The magnetic field in the magnet frame and the electric field in the conductor frame must generate consistent results in the conductor. At the time of Einstein in 1905, the field equations as represented by Maxwell's equations were properly consistent. Newton's law of motion, however, had to be modified to provide consistent particle trajectories.[5]

Assuming that the magnet frame and the conductor frame are related by a Galilean transformation, it is straightforward to compute the fields and forces in both frames. This will demonstrate that the induced current is indeed the same in both frames. As a byproduct, this argument will also yield a general formula for the electric and magnetic fields in one frame in terms of the fields in another frame.[6]

In general, the force exerted upon a particle of charge q in the conductor by the electric field and magnetic field is given by (SI units):

is the charge on the particle,

is the particle velocity and F is the Lorentz force. Here, however, the electric field is zero, so the force on the particle is

In this frame, there is an electric field, generated by the Maxwell-Faraday equation:

Using the above expression for B',

(using the chain rule and Gauss's law for magnetism). This has the solution:

A similar sort of argument can be made if the magnet's frame also contains electric fields. (The Ampere-Maxwell equation also comes into play, explaining how, in the conductor's frame, this moving electric field will contribute to the magnetic field.) The end result is that, in general,

with c0 the speed of light in free space.

Transformation of fields as predicted by Maxwell's equations

In a frame moving at velocity v, the E-field in the moving frame when there is no E-field in the stationary magnet frame Maxwell's equations transform as:[8]

is called the Lorentz factor and c0 is the speed of light in free space. This result is a consequence of requiring that observers in all inertial frames arrive at the same form for Maxwell's equations. In particular, all observers must see the same speed of light c0. That requirement leads to the Lorentz transformation for space and time. Assuming a Lorentz transformation, invariance of Maxwell's equations then leads to the above transformation of the fields for this example.

Consequently, the force on the charge is

This expression differs from the expression obtained from the nonrelativistic Newton's law of motion by a factor of γ. Special relativity modifies space and time in a manner such that the forces and fields transform consistently.

Modification of dynamics for consistency with Maxwell's equations

The Lorentz force has the same form in both frames, though the fields differ, namely:

See Figure 1. To simplify, let the magnetic field point in the z-direction and vary with location x, and let the conductor translate in the positive x-direction with velocity v. Consequently, in the magnet frame where the conductor is moving, the Lorentz force points in the negative y-direction, perpendicular to both the velocity, and the B-field. The force on a charge, here due only to the B-field, is

while in the conductor frame where the magnet is moving, the force is also in the negative y-direction, and now due only to the E-field with a value:

The two forces differ by the Lorentz factor γ. This difference is expected in a relativistic theory, however, due to the change in space-time between frames, as discussed next.

Relativity takes the Lorentz transformation of space-time suggested by invariance of Maxwell's equations and imposes it upon dynamics as well (a revision of Newton's laws of motion). In this example, the Lorentz transformation affects the x-direction only (the relative motion of the two frames is along the x-direction). The relations connecting time and space are ( primes denote the moving conductor frame ) :[9]

These transformations lead to a change in the y-component of a force:

That is, within Lorentz invariance, force is not the same in all frames of reference, unlike Galilean invariance. But, from the earlier analysis based upon the Lorentz force law:

which agrees completely. So the force on the charge is not the same in both frames, but it transforms as expected according to relativity.

Newton's law of motion can be written in modern covariant notation in terms of the field strength tensor as (cgs units):

where m is the particle mass, q is the charge, and

The field strength tensor is written in terms of fields as:

related to the electric and magnetic fields by:

The fields are transformed to a frame moving with constant relative velocity by:

is a Lorentz transformation.

In the magnet/conductor problem this gives

which agrees with the traditional transformation when one takes into account the difference between SI and cgs units. Thus, the relativistic modification to Newton's law of motion using the traditional Lorentz force yields predictions for the motion of particles that are consistent in all frames of reference with Maxwell's equations.