A Matter of Life and Death (album)

A Matter of Life and Death (album) 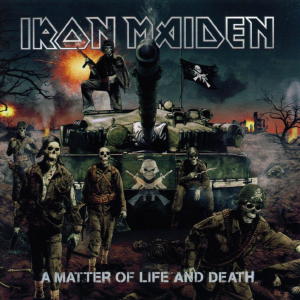 "A Matter of Life and Death" is the 14th studio album by English heavy metal band . It was released on in Italy and in Finland, worldwide, and in the United States, Canada and Japan. It is the first heavy metal album to debut at #4 in India, and made it to #2 in the Indian charts. It is also one of the few rock/metal albums to go platinum in India. It is the first album in Iron Maiden's more than 30 year career to enter the U.S. Billboard charts in the top 10, and has seen significant chart success in many other countries.

was the tour supporting the .

The band, still consisting of the same lineup as their previous two studio albums (making it the second most stable lineup; see "Powerslave"), started to write the songs near the end of 2005 after their hugely successful appearances in the U.S. and . By the end of the year, the songs were done and they started rehearsing at in .

At 72 minutes, "A Matter of Life and Death" is the band's longest album to date (exceeding 1995's "The X Factor" by approximately one minute) and its average song length (7:12) also makes it the longest Iron Maiden album by song average.

This is the band's fourth studio album that is not named after a specific song on the album, following "Piece of Mind", "The X Factor" and "".

The album cover was created by , an American artist, currently best known for his covers on the "" comics.

During their North American, Japanese and European tours, they performed the entire album in full.They announced after the show at Earl's Court, London on December 23rd, 2006, that the album would never be played in its entirety again.

The album was met with positive reviews. "" rated the album 10/10 and stated that "Iron Maiden have utterly surpassed themselves", rated it 5/5 and said "Another [Iron] Maiden classic... Keeps what longtime fans loved about the band alive."Classic Rock" also awarded it Album of the Year, and the band won an award voted by "Classic Rock" readers, for the album. "" gave the album 3 stars out of 5, finding the music and lyrics "relevant." However, the magazine also claims that "the songs now march where they once galloped", implying that the band is "aging gracefully"

"Different World" was the second single released from the album [ [http://www.billboard.com/bbcom/discography/index.jsp?pid=4887&aid=811196 Billboard.com - Discography - Iron Maiden - Different World [3 Track Single ] ] . It has already been receiving airplay on many rock radio stations. The song also features an animated video, similar to that of "Wildest Dreams".

In addition to the standard CD release, "A Matter of Life and Death" was also released in a version which contains a bonus . The DVD, which has a total runtime of nearly one hour, contains a half-hour documentary, plus videos and photos all shot whilst the band were making the album. The documentary "The Making of A Matter of Life and Death", directed by Matthew Amos (director of "" and "" DVD documentaries), features candid video footage shot largely by himself during the recording of the album giving a behind-the-scenes look at life in the studio. The bonus DVD also features the full video promo for "", and a special intimate filming of the band recording "Different World" in the studio. The album is also available as a limited edition double vinyl in gatefold sleeve, and as a digital download.

The album went gold in Finland in its first week. [cite web
url=http://www.mtv3.fi/viihde/uutiset/musiikki.shtml/466223?iron_maiden
title=Iron Maiden kotimaisten myyntilistojen kärjessä
date=2006-08-31
accessdate=2006-09-17
publisher=MTV3 Finland] This gold record became Maiden's 8th from Finland. The album sold over 220,000 copies worldwide on its first day of release and sold over 500,000 copies worldwide in 3 days. By the end of the first week of release, A Matter of Life and Death had sold over a million copies worldwide. It entered at no. 4 in the world album chart, no. 1 in ten countries, no. 4 in the UK charts, no. 2 in Canada, no. 4 in India , and for the first time entered the U.S. top 10 at no. 9 with sales of over 56,000. An update on Iron Maiden's official website states that "In just the first week the new album has shipped over a million copies worldwide and impacted on the charts pretty well everywhere in the world". In doing so it has charted in the top 20 in 34 countries worldwide.