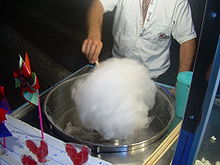 Spinning cotton candy at a funfair.

Cotton candy (U.S., Canada), candy floss or candyfloss (UK, Ireland, New Zealand and South Africa), or fairy floss (Australia) is a form of spun sugar. Since cotton candy is mostly air, a small initial quantity of sugar generates a tremendously greater final volume, causing servings to be physically large and voluminous. A typical serving on a stick is approximately one ounce/ 30 grams and contains roughly 115 calories. It is sometimes sold in bags containing several servings (see accompanying photos).[1][2][3] Cotton candy is often served at fairgrounds or circuses. Food coloring is used to change the natural white color. A similar confectionery is the Persian Pashmak, and the Turkish Pişmaniye, although the latter is made with flour in addition to sugar.

Cotton candy was first recorded around the 1900s. At that time, spun sugar was an expensive, labor-intensive endeavor and was not generally available to the average person.[4] Machine-spun cotton candy was invented in 1897 by the dentist William Morrison and confectioner John C. Wharton and first introduced to a wide audience at the 1904 World's Fair as "Fairy Floss"[5] with great success, selling 68,655 boxes at the then-high price of 25¢, half the cost of admission to the fair. Fairy floss was renamed to "cotton candy" in the 1920s.[6]In the 1970s an automatic cotton candy machine was created which made the product and packaged it. This made it easier to produce and available to sell at carnivals, fairs, and stores.

Typical machines used to make cotton candy include a spinning head enclosing a small "sugar reserve" bowl into which a charge of granulated, colored sugar (or separate sugar and food coloring) is poured. Heaters near the rim of the head melt the sugar, which is squeezed out through tiny holes by centrifugal force. Precolored sugar packaged specially for the process is milled with melting characteristics and a crystal size optimized for the head and heated holes; granulated sugar used in baking contains fine crystals which spin out unmelted, while rock sugar crystals are too large to properly contact the heater, slowing the production of floss.

The molten sugar solidifies in the air and is caught in a larger bowl which totally surrounds the spinning head. Left to operate for a period, the cottonlike product builds up on the inside walls of the larger bowl, at which point the machine operator twirls a stick, cone, or their hands around the rim of the large catching bowl, gathering the sugar strands into portions which are served on stick or cone, or in plastic bags. As the sugar reserve bowl empties, the operator recharges it with more feedstock. The product is sensitive to humidity, and in humid summer locales, the process can be messy and sticky.

Modern innovations in Cotton Candy equipment include vending machines which automatically produce single-servings of the product, developed in the United Kingdom[8] and in Taiwan,[9] and lighted or glowing sticks.[10]

In 1972 the first automated machine was used for the production of cotton candy. Since then the creations and innovations of this machine have become greater and greater. They range in sizes from counter-top accessible to party and carnival size. In today’s world we can find machines that do so much at once, instead of its traditional use of having one flavor at a time. Today’s machines that are made for commercial use can hold up to 3 pounds of sugar and have compartments for storage of extra flavors. The rotating bowl at the top spins at 3,450 revolutions per minute.[11] That is what creates the threadlike candy from the sugar that is melted.

Sticky and sweet, it dissolves quickly in the mouth (due to its amorphous nature) although it feels like wool to the touch. It does not have much of an aroma although the machine itself has a cooked sugar smell when in operation. When it comes in contact with moisture, it becomes sticky and damp. Because the sugar is hygroscopic, and has a very large surface area, it will become coarser, harder and generally less "flossy" once exposed to the atmosphere.