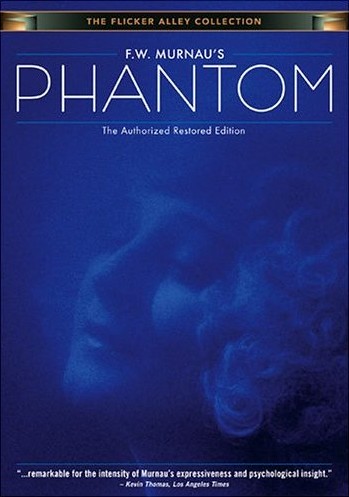 "Phantom" (1922) is a that was directed by F. W. Murnau the same year Murnau directed "". It is an example of film and has a surreal, dreamlike quality. The film was thought to be a for many years, but was restored by German film archivists and re-released in the on . (Source: IMDB)

The film is told in an extended flashback. Lorenz Lubota (), is a clerk in a minor government office, an aspiring poet, and a member of a family headed by a worrisome mother who has a tense relationship with a daughter, Melanie, whom the mother believes works as a prostitute. While going to work one day, a woman () driving two white horses hits Lorenz in the road. Physically, he is unharmed, but from that point forward, the woman in the carriage (named Veronika) consumes his every thought.

His obsession with Veronika costs him his job when he fails to show up for work and threatens his boss for accusing him of stalking her. Believing that his poems are to be published, Lorenz asks his Aunt Schwabe ()--a cutthroat --for money, which he then uses to buy a new suit. Schwab's assistant, Wigottschinski (), encourages Lorenz to celebrate and they reunite with Lorenz's sister, who becomes Wigottschinski's girlfriend. Unable to contact Veronika, who is wealthy and engaged to someone of her own class, Lorenz instead begins courting a who looks like Veronika (also played by Lya De Putti), lavishing her with expensive things, all the while reliving the day he was run over in his mind again and again. In the meantime Lorenz's mother's health begins to deteriorate due to her worries over her son's and her daughter's actions, and Lorenz's friend Marie () and her father learn that Lorenz's poems will not be published after all.

Wigottschinski swindles more money out of Schwabe and gives Lorenz a sizable amount. However, Aunt Schwabe becomes suspicious and discovers that Lorenz will not be a published poet, and she angrily demands that he pay back the money after three days or else she will notify the police. Desperate, Lorenz agrees to Wigottschinski's plan to break into her house after she has gone to sleep and to steal enough money to pay back the loan. She wakes up and discovers them, running to the window to call for the police. A struggle ensues, and Wigottschinski kills her, while Melanie runs off and eventually briefly reunites with her mother before disappearing.

Lorenz is arrested and sent to prison. After his release, the film returns to the present, where Lorenz is finishing writing his life story down, in an attempt to purge his mind from the phantom woman who continually hits him in her carriage. Lorenz also now has a new life with Marie.