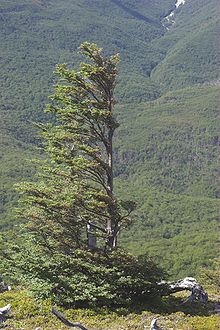 The Magellanic subpolar forests are a terrestrial ecoregion of southernmost South America, covering parts of southern Chile and Argentina,[1] and is part of the Neotropic ecozone. It is a temperate broadleaf and mixed forests ecoregion, and contains the world's southernmost forests.

The Magellanic subpolar forests ecoregion lies to the west of the Andes Mountains, which run north-south for most of their length but curve eastward near the southern tip of South America, terminating at the archipelago of Tierra del Fuego. The Magellanic ecoregion was covered by glaciers during the last ice age, and the landscape is deeply dissected by fjords, with numerous islands, inlets, and channels, including the Strait of Magellan, which separates Tierra del Fuego from the South American mainland and is the route taken by Portuguese explorer Ferdinand Magellan from the South Atlantic to the South Pacific. North of roughly 48º south latitude lies the Valdivian temperate rain forests ecoregion, which shares many affinities with the Magellanic ecoregion in plant and animal life. To the east lie the drier temperate grasslands and shrublands ecoregions of Patagonia, which are in the rain shadow of the Andean and Fuegian mountains.

The Andean and Fuegan mountains intercept moisture-laden westerly winds, creating temperate rain forest conditions, while the cold oceanic Humboldt Current, which runs up the west coast of South America, and the cold Antarctic Circumpolar Current, which runs from west to east through the Southern Ocean, keep the Magellanic ecoregion cool and wet, and the strong oceanic influence moderates seasonal temperature extremes. Averages temperatures a year vary from 6°C (42°F) in the north to 3°C (37°F) in the south and rainfalls a year from 4000 mm (160 in) in the west to 450 mm (18 in) in the east. Snowfalls can occur even in summer. Fog is very frequent. Very strong winds whip the region and these compel trees to grow in twisted and bent shapes fighting against the wind; and people call them "flag trees" .

Like the Valdivian ecoregion, the Magellanic subpolar forests are a refuge for the Antarctic flora, and share many plant families with the temperate forest ecoregions of New Zealand, Tasmania, and Australia, especially the southern beech, (Nothofagus). Species of Nothofagus, including N. betuloides, N. antarctica, and N. pumilio, are the characteristic trees of the Magellanic ecoregion. The Magellanic ecoregion does not have the same species richness as the milder Valdivian ecoregion, both on account of its colder climate and its recent glaciation. The advancing glaciers caused the forests to retreat far to the north, and the region was gradually reforested starting about 10,000 years ago when the climate warmed and the glaciers retreated.

The Magellanic moorland occurs on the western edge of the region where the oceanic influence is strongest. High rainfall of 5000 mm/year (200 in/year) is typical of the moorland, as are cool temperatures, strong winds, bad drainage conditions and rocky ground with generally thin soil. Most of the moorland consists of a mosaic of low-growing plants, including dwarf shrubs and wind-sheared trees, cushion plants, grasses and mosses. These plants can form an underlayer of blanket peat and boggy areas. In more sheltered areas, small stands of evergreen forest can be found, which include Nothofagus betuloides, Drimys winteri, Lepidothamnus fonkii, and Pilgerodendron uviferum.

Farther from the ocean, in more moderate areas less exposed to the oceanic wind and rain, moorland yields to evergreen Magellanic rainforest. The Magellanic rainforest is mostly made up Nothofagus betuloides, together with other evergreen trees, most often Drimys winteri and Pilgerodendron uviferum, and occasionally Embothrium coccineum and Maytenus magellanica. In the better established forest stands, a species-rich shrub layer may develop. In exposed, rocky, and poorly drained areas, pockets of deciduous Nothofagus antarctica and the typical moorland species can be found.

In open spaces some delicious fruits can be found: Chilean strawberry (Fragaria chiloensis) and calafate (Berberis buxifolia), they used to complement the nourishment of the (now almost nonexistent) native peoples.

These forests are peerless in their endurance of cold summers (averaging 9 degrees Celsius at sea level) and violent subpolar winds. Due to these traits, Magellanic forests' tree species are exported to other parts of the world with similar conditions where trees from other provenances cannot grow, such as the Faroe Islands and neighboring archipelagos. The following species from Tierra del Fuego: Drimys winteri, Nothofagus antarctica, Nothofagus pumilio, and Nothofagus betuloides, were successfully introduced to Faroe. As a general rule, Fueguian trees show better signs of acclimation than those from Northern Europe to conditions in Faroe.[2]

The Magellanic subpolar forests are home to the Southern Pudú, the world's smallest deer, which stands only 35-45 cm (14-18 inches) high at the shoulder. Other animal species include the Cougar (Puma concolor) and the endangered Southern River Otter (Lontra provocax). Endemic rodents include the Patagonian rat, the mole mouse, and the viscacha, a small rodent that looks almost like a rabbit with a long, bushy tail.