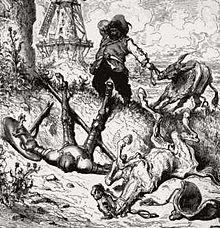 Don Quixote and his sidekick Sancho Panza, by Gustave Doré: their character contrasts are made manifest not only by their behavior, but also by their physical appearance.

In fiction, a foil is a character who contrasts with another character (usually the protagonist) in order to highlight various features of that other character's personality, throwing these characteristics into sharper focus.[1][2]

A foil's complementary role may be emphasized by physical characteristics. A foil usually differs drastically. For example in Cervantes' Don Quixote, the dreamy and impractical Quixote is thin in contrast to his companion, the realistic and practical Sancho Panza, who is fat. Another popular fictional character, Sherlock Holmes, is tall and lean; his right-hand man Doctor Watson, meanwhile, is often described as "middle-sized, strongly built." The "straight man" in a comedy duo is a comic foil. While the straight man portrays a reasonable and serious character, the other portrays a funny, dumb, or simply unorthodox one.

In some cases, a subplot can be used as a foil to the main plot. This is especially true in the case of metafiction and the "story within a story" motif.[3]