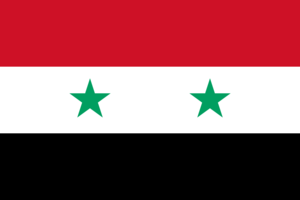 symbol = Coat of arms of Egypt

The United Arab Republic ( _ar. الجمهورية العربية المتحدة "al-Jumhūrīyah al-‘Arabīyah al-Muttaḥidah" / "al-Jumhūrīyah al-‘Arabīyah al-Muttaḥidah"), often abbreviated as the U.A.R., was a union between and . The union began in and existed until when Syria seceded from the union. Egypt continued to be known officially as the "United Arab Republic" until .

Established on , , as a first step towards a pan-Arab state, the UAR was created when a group of political and military leaders in Syria proposed a merger of the two states to Egyptian president . Pan-Arab sentiment was very strong in Syria, and Nasser was a popular hero-figure throughout the Arab World following the of 1956. There was thus considerable popular support in Syria for union with Nasser's Egypt.

According , Nasser resisted a total union with Syria, favoring instead a federal union. However, Nasser was "more afraid of a Communist takeover" and agreed on a total merger. The increasing strength of the , under the leadership of , worried the ruling , which was also suffering from an internal crisis from which prominent members were anxious to find an escape. Syria had a democratic government since the overthrow of 's military regime in 1954, and the popular pressure for Arab unity was reflected in the composition of parliament. [cite book |last=Aburish |first=Said K. |authorlink=Said Aburish |title=Nasser, the Last Arab |year=2004 |publisher=St. Martin's Press |pages=pp.151 |location=New York |isbn=0-312-28683 ] The strength of this popular sentiment was such that the Syrian Communist Party and the both took a positive stance towards unification, despite Nasser's repression of the two parties' organizations in Egypt. The Syrian elite also hoped to find new markets in Egypt.

President Nasser of and President of Syria signed the union pact on after a in both countries. President Nasser was elected as the new republic's president, and was chosen to be the capital. A new federal constitution was adopted.

Ultimately, the Egyptian leadership of the union, and the arrogant attitude that many in perceived among the Egyptian military and administrative personnel sent there, came to be resented by important elements in the Syrian military, political and bureaucratic elite. In addition, the Damascus business sector did not gain the access to the Egyptian market that they had hoped for. The political leaders of Syria, who were forced to live in Cairo, felt disconnected from their sources of power.

The UAR collapsed in 1961 after a in Syria brought a secessionist group to power. The separation was deeply contested in Syria, and a bitter political struggle reflected in popular commotion and street confrontations ensued until the Ba'ath Party, Nasserists and other pro-union elements took power in 1963. The union, however, was not re-established. Egypt, now alone in the United Arab Republic, continued to use the name until 1971 after Nasser's death.

The union bound the two nations together into a united state, and, following his February 1958 nomination to the position, under the presidency of Nasser. The Republic was a unitary state, and the pre-eminence of Nasser together with Egypt's demographic and political dominance meant that it was effectively under Egyptian control. Egyptian military and technical advisors poured into Syria, with the Syrian military, police and bureaucracy coming under Egyptian control, a situation that would lead to considerable resentment. The ban on political parties other than Nasser's was extended to Syria, and the and in Syria both dissolved themselves into the ruling party. Resisting political elements were dealt with ruthlessly: after Khalid Bakdash's proposals of December 1958 for a looser federation, the Syrian Communist Party was brutally repressed, as were Islamist tendencies.

Ironically, the new nation found itself supported by the very force some of its proponents had feared. The , aiming to garner allies, quickly began selling weapons to the fledgling republic, a practice it would continue even after the UAR collapsed.

The UAR adopted a flag based on the but with two stars to represent the two parts. This continues to be the . In , adopted a flag that was similar but with three stars, representing the hope that Iraq would join the UAR. The is also based on horizontal red, white and black.

If ranked today, the United Arab Republic would be the 25th largest nation on the planet ( being the 30th and being the 88th) It was comparable in size to (then known as the ), twice the size of , four times the size of the , and is more than half the size of the of .

Following the dissipation of the , The UAR further exerted control over the Gaza strip, until the .

Nevertheless, due to the aridity of Egypt's climate, population centres there are concentrated along the narrow Nile Valley and Delta, meaning that approximately 99% of the population of Egypt uses only about 5.5% of the total land area. [Hamza, Waleed. [http://iodeweb1.vliz.be/odin/bitstream/1834/383/1/Hamza.pdf Land use and Coastal Management in the Third Countries: Egypt as a case] . Accessed= 2007-06-10.]

Egypt is bordered by to the west, to the south, and by the and to the east. Egypt's important role in geopolitics stems from its strategic position: a , it possesses a land bridge (the Isthmus of Suez) between and , which in turn is traversed by a navigable waterway (the ) that connects the Mediterranean Sea with the via the .

Apart from the Nile Valley, the majority of Egypt's landscape is a sandy desert. The winds blowing can create sand dunes more than convert|100|ft high. Egypt includes parts of the and of the . These deserts were referred to as the "red land" in ancient Egypt, and they protected the Kingdom of the Pharaohs from western threats.

Towns and cities include , one of the greatest ancient cities, , , , the modern Egyptian capital, , , the site of the Pyramid of Khufu, , , , , , , , where the Suez Canal is located, , and Al-Minya. Oases include Bahariya, el Dakhla, Farafra, el Kharga and Siwa. include Ras Mohamed National Park, Zaranik Protectorate and Siwa. See for more information.

Syria consists mostly of arid plateau, although the northwest part of the country bordering the is fairly green. The Northeast of the country "Al Jazira" and the South "Hawran" are important agricultural areas. The , Syria's most important river, crosses the country in the east.

Syria is considered to be one of the fifteen states that comprise the so-called "".

Major cities include the capital in the southwest, in the north, and . Most of the other important cities are located along the coast line (see ).

The climate in Syria is dry and hot, and winters are mild. Because of the country's elevation, snowfall does occasionally occur during winter.Petroleum in commercial quantities was first discovered in the northeast in 1956. The most important oil fields are those of Suwaydiyah, Qaratshui, Rumayian, and Tayyem, near Dayr az–Zawr. The fields are a natural extension of the Iraqi fields of Mosul and Kirkuk. Petroleum became Syria's leading natural resource and chief export after 1974. Natural gas was discovered at the field of Jbessa in 1940.

The most supportive Arab state of the UAR was . Iraq sought to join the union between 1960 and 1961, and then reunite the union after 1963 with the proposal of Egypt, Iraq, and Syria reforming the UAR. A new flag was proposed, three stars symbolizing the three states constituting the union. However, the union was not to be. Yet Iraq continued to use the three-star flag and later adopted it as the national The three star flag remained Iraq's national flag until 1991.

The union was interpreted as a major threat to . Syria was seen as a source of instigation and shelter for Jordanian plotters against . Egypt's own status as a state hostile to Western involvement in the region (and thus to the close relationship between the British, in particular, and the Jordanian and Iraqi monarchies) added to the pressure. Hussein’s response was to propose to Faisal II of a Jordanian-Iraqi union to counter the UAR, which was formed on , 1958. The agreement was to form a unified military command between the two states, with a unified military budget; 80% of which was to be provided by Iraq and the remaining 20% by Jordan. Troops from both countries were exchanged in the arrangement.

In early July 1958, plots against the governments of King Hussein in Jordan and King Faisal in Iraq were uncovered. One of the plotters in Jordan revealed the involvement of Egyptian secret agents, and that plot was abandoned. Then, on , King Faisal, the Crown Prince , and other members of the ruling Hashemite family were shot. Iraqi prime minister was also shot as he attempted to escape. It is unlikely that Egypt or the UAR was actively involved in the coup in Iraq. However, upon revelation of the coup, the UAR announced its support of the plotters in Iraq, recognized the new regime, and closed its border with Jordan. Syrian troops along the border were put on alert.

These actions put a good deal of pressure on King Hussein in Jordan. In 1962, he said of UAR that it had "ambitions which, I believe, at that time meant nothing less than the domination of the Arab world.” Jordan's trade routes had been cut off. Iraq had been his main supplier of oil. Hussein asked for U.S. aid in establishing trade routes through , which the Americans were able to gain permission to do.

The situation continued to deteriorate in Jordan as Damascus Radio issued broadcasts calling upon the Jordanian people to rise against the "Hashemite tyranny". Hussein was finally forced to turn to his former ally Great Britain for help. The trio of Israeli, British, and American support of the regime in Jordan played a large role in preventing conflict between Jordan and the UAR.