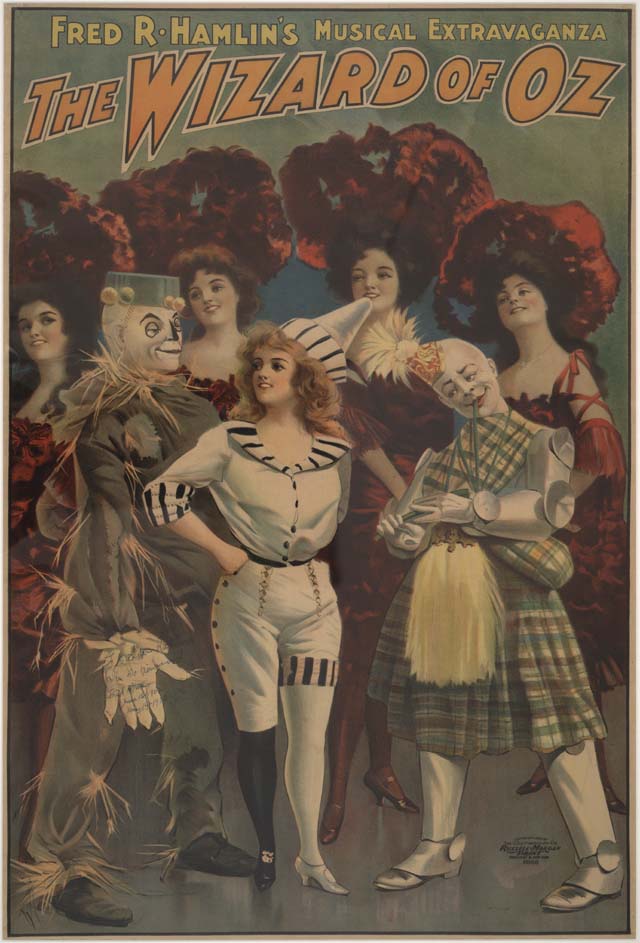 image_size = 200px
caption = One of the many promotional posters for the show, this one featuring The Scarecrow, Dorothy Gale, the Tin Woodman (dressed in what looks like a Scottish kilt and minus his funnel hat), and some Poppies
music =

"The Wizard of Oz" was a extravaganza based on "" by , which was originally published in 1900. It premiered in and later moved to Broadway in 1903, where it ran for nearly 300 performances from January 21, 1903 to December 31, 1904, followed by travelling tours of the original cast. It starred as , as The Scarecrow and as the (who is called Niccolo Chopper in the play). Arthur Hill (no relation to the Canadian film, theatre and TV actor) played , but in this version, his role was reduced to a bit part. An element from the show - the snowfall caused by the Good Witch which finally kills the spell of the poppies that had put Dorothy and the Cowardly Lion to sleep - was later used in the famous 1939 movie.

The play was written by L. Frank Baum himself, though after producer and director Julian Mitchell rejected his 1901 , "The Wonderful Wizard of Oz", which held close to the novel, he wrote a completely new script based on their desires. He hired the librettist of "Babes in Toyland", to add topical humor he felt himself incapable of writing. Most of the original songs were written by on Baum's lyrics, but three, "The Guardian of the Gate" which was cut ofter only a few performances, "The Different Ways of Making Love" (which sounded less risqué at the time), and "It Happens Every Day" were composed by , who later wrote the score for Baum's 1908 film/theatrical presentation, "". Most of Baum's songs related to the story in some way, as in , but as performed, the play was more like , and new songs by other were frequently substituted. In fact, the first song interpolated into the musical was "The Traveler and the Pie", a major number for the Scarecrow, a song Baum and Tietjens had intended for a play called "", which was never produced and possibly never completed. This was to be an exception in that it was written by Baum and Tietjens, but it was a classic of the time and stayed in the show. James O'Dea and Edward Hutchinson wrote one of the show's most celebrated songs, "Sammy", which was sung by Tryxie Tryfle about a lost love before Pastoria, though the only contemporary recording of the piece was sung by a man!

The witches are largely absent in this version; appears, named Locasta, and is a special effect. does not appear, and appears to have been written out, as she does not appear in the Broadway cast list, although she does appear on another one. Toto, Dorothy's dog, has also been replaced, by a cow named Imogene.

New characters in the script include King II, Oz's true king working as a Kansas motorman and his girlfriend, Trixie Tryfle, a waitress. His return takes up a bit more of the story than Dorothy's desire to return home. Another subplot includes Cynthia Cynch, the Lady Lunatic, a prototype for , in that she is the Tin Woodman's girlfriend. Niccolo Chopper was renowned for his ability to play the , which was the subject of one of her songs, and he is shown playing a piccolo in "The Wonderful Wizard of Oz", which, the first Oz film made without Baum, was highly influenced by the popular play. The Wizard was presented as various ethnic stereotypes, depending upon who played him. He was assisted by Sir Wiley Gyle and General Riskitt. and erroneously captioned a picture of General Riskitt as "Sir Wiley Gyle" in "", and carried this mistake over into his illustrations for "".

The animals in the play, including the Cowardly Lion, did not speak, based on tradition. Although the lion costume was realistic, far more so than 's in the MGM film, his main purpose was a bit of comic relief and scaring off the villains on occasion. His quest for courage is completely omitted, much as the other characters' quests are deemphasized in favor of various comic routines. Ultimately, though, their desire to seek the Wizard's aid gets them caught on the wrong side of the revolution, jailed and ultimately scheduled for execution. In a , another tornado arrives to sweep Dorothy home from the chopping block.

Many new plot twists are virtually pointless. In addition to a kiss of protection, Dorothy gets three wishes, one of which is wasted on a triviality. The second is used to bring the Scarecrow to life, and the third is used so she can learn the song Sir Dashemoff Daily (a ) has written to his girlfriend, Carrie Barry. This song was written by Baum and Tietjens, but some programs credited the song to Glen MacDonough and to make their connection to the play look greater.

Probably the biggest influence on the 1939 MGM film, aside from making the story into a musical (for which many at MGM thought this show's classic songs should be utilized, though they were outvoted), is the Poppy Sequence that ended Act I. In the novel, Baum imaginatively has a legion of field mice pull a cart with the Cowardly Lion out of the poppy field. This was deemed unfeasible (though the stage version of "" created a variation, with the mice as vice cops), and Baum, though he included it in the 1901 script, replaced the scene with that of the Snow Queen creating a storm that destroys the poppies, much as Glinda does in the 1939 movie. This concluded Act I with an elaborate dance known as "Winter Jubilation", which plays on synthesizers on the album, "".

Because there were no cast albums in those days, productions of the musical often exceeded four hours in length because of multiple demands for encores, since many of the attendees knew they would never get to attend again, and these encores were responded to. Popular songs were often sung multiple times and this was often used to gauge whether a song should be retained or dropped. Two popular routines that were worked in include a routine and a football routine, the latter parodying the level of in the sport, which had recently been lessened due to new regulations.

The success of the play led Baum to write "" after four years of demand for a sequel to the novel. He dedicated the book to Montgomery and Stone, and made the roles of the Scarecrow and Tin Woodman prominent, with the roles of Dorothy and the Cowardly Lion reduced to a reminiscence. After the team balked at leaving "Wizard" for a sequel, Baum wrote the stage musical, "", eliminating the Tin Woodman, replacing the Scarecrow with Regent Sir Richard Spud, replacing Glinda with Maetta from "" and renaming the the "City of Jewels," though Oz is mentioned several times. The first appearance of the title character was moved from halfway through the novel to the opening scene, and his mentor, Professor Knowitall, name shortened to Professor Knowitt, was raised to the level of romantic lead with a girlfriend named Prissy Pring, a Captain in General 's Army of Revolt. Jack Pumpkinhead and The Woggle-Bug became a comic team analogous to the Scarecrow and Tin Woodman. The play was performed at the in and opened to reviews panning Baum's script and praising the score by . No songs were interpolated, but the general consensus was that the play was a cash-in or rip-off of "The Wizard of Oz" rather than a sequel.

The play was performed in a concert version in in the 1980s. And it has been revived in by the in 1998 and, most recently, July 2006. announced several years ago that it would be publishing the complete libretto for the first time, but has been delayed years beyond the original announcement on claims of finding new material, though many suspect the sudden death of was the major factor. There have been several new recordings of the songs, though none have had major distribution.

*Just a Simple Girl from the Prairie ()
*Niccolo's Piccolo (sometimes attributed to MacDonough and Sloan) (Cynthia Cynch)
*Carrie Barry (sometimes attributed to MacDonough and Sloan) (Dorothy Gale)
*The Scarecrow (Alas for the Man Without Brains) (Scarecrow)
*Love Is Love (Sir Dashemoff Daily)
*When You Love, Love, Love (Scarecrow, , and Dorothy Gale)
*Poppy Song (Poppy Chorus)
*When We Get What's A'comin to Us (Dorothy Gale, Scarecrow, Tin Woodman)
*The Wizard Is No Longer King (Ensemble)
*The Traveler and the Pie (Scarecrow)

*She Didn't Really Mind the Thing at All (Wizard)

by A. Baldwin Sloane and Glen MacDonough

*In Michigan (Pastoria)
*The Man Who Stays in Town (Pastoria and Tryxie Tryfle) (unconfirmed, uncredited attribution)
*Star of My Native Land (Pastoria)

by William Jerome and Jean Schwartz

by Edgar Smith and A. Baldwin Sloane

by Weslyn and Albert

*The Witch Behind the Moon

*I'll Be Your Honey in the Springtime (Dorothy Gale and Chorus)

by James O'Dea and Edward Hutchinson

by Will D. Cobb and Gus Edwards

by Hugh Morton and Gustave Kerker

*That's Where She Sits All Day (Scarecrow and Tin Woodman in " ")

by Henry M. Blossom, Jr. and George A. Spink

*Must You? (Tin Woodman, with Scarecrow)

*Things That We Don't Learn at School

by Vincent Bryan and J.B. Mullen

by Will R. Anderson

*I Love You All the Time (Sir Dashemoff Daily)

by Williams and Vanalstyne

by Charles Zimmerman and Frank Keesee

*Only You (Sir Dashemoff Daily)

by Charles Zimmerman and Hollister

*When the Heart is Sad (Sir Dashemoff Daily)

by Vincent Bryan and Charles Zimmerman

by Vincent Bryan and Leo Edwards

by James A. Brennan