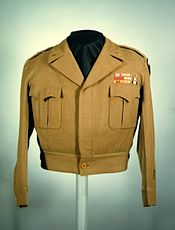 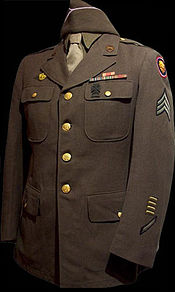 The Eisenhower jacket, or "Ike" jacket, is a type of military uniform blouson, or shortened coat, terminating in a waistband.

Until the late-1930s, the United States Army’s field uniform consisted of a wool shirt, mid-hip-length "all-purpose service coat" and wool overcoat. Save for its belted waist, the single-breasted service coat resembled a suit or sport coat more than a uniform. Little changed since World War I, it featured notched lapels and five metal buttons from its open collar to its belted waist. Made of heavy wool serge, it touted two flapped and button-through patch pockets at the breast and two identically styled patch pockets below its belted waist – its four pockets either box-pleated or bellows-styled-pleats.[2]

Using civilian "windbreakers" as its ideal design objective, the army began a four-year study in 1935 to develop a more practical and effective combat jacket to replace the service coat. 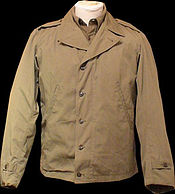 In 1940, it first adopted the M-38, then later, the M-41 field jacket, or "Parsons' jacket," named for Major General J. K. Parsons who helmed its development. Simply designed and modeled after a civilian windbreaker made by John Rissman & Sons of Chicago, it was a short, button-front weatherproof jacket with a tight fitting waist and two flapped and button-through front pockets.

In early 1943, front-line skirmishes in Europe and North Africa proved the long, mid hip-length Service Coat, as well as the shorter M-41 Parson’s field jacket, inappropriate for what was then modern-era combat. The Service Coat was re-deployed to garrison and parade duty, exclusively, and the M-41 was replaced by a new and completely redesigned Field Jacket, the M-43.[4]

Although the M-41 Parson’s Jacket was widely used in many theatres during World War II, it was found to be an unsatisfactory solution for the soldiers using it. The War Department created a new coat based on the layering principle to give greater flexibility for the numerous environmental conditions encountered in the world-wide war. [5]. 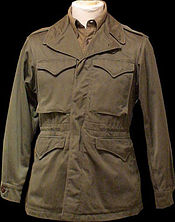 Built around the layering principle, the M-43 became the basic building block of a multi-environment, all-season combat uniform being developed by the Office of the Quartermaster General (OQMG) for worldwide combat.[8]

On May 15, 1943, the Air Transport Command (ATC) recommended development of a short, waist cropped woolen field jacket that could be worn under the M-43 as an added insulator.

By mid-1944, the OQMG finalized the several layering components of its multi-environment combat uniform, anointing the M-43 Field Jacket its basic, universal building block. A dramatically revised version of the M-41, the M-43 touted a wind-proof, olive drab colored cotton poplin outer shell with internal layers that could be added or eliminated depending on local battle conditions. In cold environs, its notched lapels converted to a stand-up, storm-flap for added neck protections. A pile jacket liner and fur-edged hood could also be added.[9]

During the Autumn of 1943, the Army Air Corps prototype jacket was sent to Chief Quartermaster of the European Theater of Operations for review and possible adoption by ETO commanding general, Dwight D. Eisenhower.

Eisenhower had already requested a waist-cropped style; his based on the British battle jacket, "but with more distinctive style." Eisenhower was a partisan advocate of the British jacket’s functional sensibilities.

The Eisenhower jacket may have been designed by William Marler, a tailor from New York.[10]

In November, 1944, the M-44, or Ike jacket, was classified standard issued. The Ike jacket featured a roomy, bloused back with action pleats and oversized sleeves, its fit large and loose to accommodate the several added insulating underlays without compromising either comfort or freedom of movement.

Immediately after its issue the Eisenhower jacket was assigned double-duty. Besides being a combat field jacket it was also appointed the Army’s dress and parade uniform.

Whether the standard issue, M-44 Field Jacket or its sveltely re-tailored, Ike jacket sibling, their shared common denominators are an olive drab, 18-ounce wool serge. Once turned up and buttoned over, its notched lapels became a convertible, "storm collar" that protected the neck and throat in chilly environs. Staggered cuffs buttons created adjustable cuffs that could be relaxed or cinched tight at the wrist.

To prevent equipment from catching on its buttons, a "fly front" flap concealed its button front, a shrewd design ploy that also prevented snagging in dense underbrush, whether walking or crawling. For the same reason, its flapped, bellows breast pockets touted hidden buttons.[11]

The Epaulets corralled shoulder hung equipment. Adjustable buckles at left and right sides cinched the waist-band tight at the hips, delivering added warmth and accentuating its masculine, broad-shouldered lines. "Action-back" pleats, one at each shoulder, extended to the waistband, assuring a slim and trim shape but generously providing ample room for unrestricted freedom of movement, even when firing a raised a rifle or pistol.

According to Paul Fussell’s Uniforms, "Eisenhower had a reputation among his troops as an eminently decent man, friendly and sympathetic," an admiration that Ike elevated even further, tells Fussell, by having the bravado to casually rest his hands inside his pocket and "violate the sacred Army injunction." That anecdote, tells Fussell, explains why Eisenhower refused to adorn his personal jacket with gilded buttons: He considered his jacket an every-warrior’s combat uniform.[12]

Thanks to its favor among GI golfers, Eisenhower included, the Ike jacket-look became a golf course staple and inspired the "golf blouson", later called "Windbreaker" - actually a genericized trademark- and later follow-up, such as the "618 Perfecto" from Schott Brothers or the 501 jacket by Levi Strauss & Co.[citation needed]

The post-WWII redesigns and adaptations 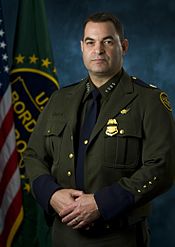 Post World War II development of the U.S. field jacket was momentous. In 1947, the Army introduced a shorter and better tailored version of the M-44. Designated the MQ-1 and designed solely as a dress and parade uniform, the jacket was again refined in 1950 and re-introduced as the M-1950 Field Jacket, but without button cuffs. With the later introduction of the "Army green" U.S. Army service uniform in 1957, the Ike jacket gradually began to disappear domestically but was still a uniform option for troops stationed in international theaters.

The United States Marine Corps (USMC) adopted the Vandegrift jacket, a variant of the Ike jacket, in 1945 and retained it through 1960. In 1947, The United States Air Force (USAF) added still another Ike jacket design iteration, the M-47, and continued its use for the next two years, before changing its color to "Air Force blue" in 1949, where it remained a signature of the USAF, until being retired in 1964.[13]

The design of the M-1943 jacket was to prove so successful, that many military forces around the world still wear field jackets that closely follow its original designs. During the 50's, a modified version, called the M-1950, was issued to U.S. forces in Korea. It had a button-in liner instead of the separate liner garment as in the M-1943. During the next year, the sometimes permanently hooded, M-1951 coat came in to use. It was another very similar design, but now had both a zip instead of buttons under the front fly and metal snap closures for the pockets. The M-1951 field jacket was actually not sent to the forces in Korea until after the 1953 armistice and so was not seen during the Korean War. It thus remained in service until replaced by the M-1965 field jacket in 1965. [14]

Thanks to its greater comfort and the unobstructed ease it offered while operating a vehicle or brandishing a side-arm, the Ike jacket design became a popular post-WWII uniform staple among Federal and state law enforcement agencies as well as with countless numbers of municipal and civilian police departments throughout America.

To this day, uniforms of the U.S. Border Patrol, along with most allied agencies within its broader, umbrella department, the U.S. Customs and Border Protection Agency (USCBPA) have a dress jacket that is near identical to the Ike jacket original.