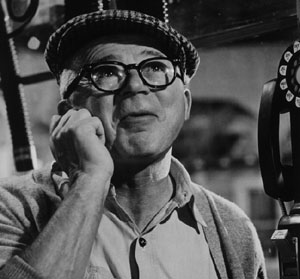 Billy Wilder (, – , ) was an n-born, -American , 6 time -winning , , and producer, whose career spanned more than 50 years and 60 s. He is regarded as one of the most brilliant and versatile filmmakers of 's golden age. Many of Wilder's films achieved both critical and public acclaim.

Born Samuel Wilder in , (now ) to Max Wilder and Eugenia Dittler, Wilder was nicknamed Billie by his mother (he changed that to "Billy" after arriving in America). Soon the family moved to , where Wilder attended school. After dropping out of the , Wilder became a journalist. To advance his career Wilder decided to move to , .

While in Berlin, before achieving success as a writer, Wilder allegedly worked as a .Fact|date=August 2008 After writing crime and sports stories as a stringer for local newspapers, he was eventually offered a regular job at a Berlin . Developing an interest in film, he began working as a screenwriter. He collaborated with several other tyros (with and , on the 1929 feature, "People on Sunday"). After the rise of , Wilder, who was ish, left for and then the . His mother, grandmother and stepfather died at the .

After arriving in Hollywood in 1933, Wilder continued his career as a screenwriter. He became a citizen of the United States in 1934. Wilder's first significant success was "", a collaboration with fellow German immigrant . Released in 1939, this starred (generally known as a tragic heroine in film s), and was popularly and critically acclaimed. With the byline, "Garbo Laughs!", it also took Garbo's career in a new direction. The film also marked Wilder's first Academy Award nomination, which he shared with co-writer . For twelve years Wilder co-wrote many of his films with Brackett, from 1938 through 1950. He followed "Ninotchka" with a series of hits in 1942, including his "" and "", as well as his directorial feature debut, "".

Wilder established his directorial reputation after helming "Double Indemnity" (1944), an early he co-wrote with mystery novelist , with whom he did not get along. "Double Indemnity" not only set conventions for the "noir" genre (such as "venetian blind" lighting and voice-over narration), but was also a landmark in the battle against Hollywood censorship. The original novel "Double Indemnity" featured two love triangles and a murder plotted for insurance money. The book was highly popular with the reading public, but had been considered unfilmable under the , because adultery was central to its plot. "Double Indemnity" is credited by some as the first true film noir, combining the stylistic elements of "" with the narrative elements of "".

Two years later, Wilder earned the Best Director and Best Screenplay for the adaptation of a story "". This was the first major American film to make a serious examination of . Another dark and cynical film Wilder co-wrote and directed was the critically acclaimed "Sunset Boulevard" in 1950, which paired rising star with . Swanson played Norma Desmond, a reclusive silent film star who dreams of a ; Holden is an aspiring screenwriter and becomes a .

In 1951, Wilder followed up "Sunset Boulevard" with the remarkably cynical "Ace in the Hole (aka The Big Carnival)", a tale of media exploitation of a mining accident. It was a critical and commercial failure, but its reputation has grown over the years. In the fifties, Wilder also directed two vibrant adaptations of Broadway plays, the POW drama "" (1953), which resulted in a Best Actor Oscar for , and the mystery "Witness for the Prosecution" (1957).

In 1959 Wilder introduced crossdressing to American film audiences with "". In this comedy and play musicians on the run from a Chicago gang, who disguise themselves as women and become romantically involved with and Joe E. Brown.

From the mid-1950s on, Wilder made mostly comedies.

In 1959, Wilder teamed with writer-producer , a collaboration that remained until the end of both men's careers. After winning three for 1960's "" (for Best Picture, Director, and Screenplay), Wilder's career slowed. His farce "" (1961) featured a rousing comic performance by , but was followed by the lesser films "" and "". Wilder garnered his last Oscar nomination for his screenplay "" in 1966. His 1970 film "" was intended as a major release, but was heavily cut by the studio and has never been fully restored. Later films such as "Fedora" and "Buddy, Buddy" failed to impress critics or the public.

Wilder's directorial choices reflected his belief in the primacy of writing. He avoided the exuberant cinematography of and because, in Wilder's opinion, shots that called attention to themselves would distract the audience from the story. Wilder's pictures have tight plotting and memorable dialogue. Wilder filmed in black and white whenever studios would let him. Despite his conservative directorial style, his subject matter often pushed the boundaries of mainstream entertainment.

Wilder was skilled at working with actors, coaxing silent era legends and out of retirement for roles in "Sunset Boulevard". For "", Wilder squeezed an Oscar-winning performance out of a reluctant (Holden wanted to make his character more likeable; Wilder refused). Wilder sometimes cast against type for major parts such as in "Double Indemnity" and "". Many today know MacMurray as a wholesome family man from the television series "", but he played a womanizing schemer in Wilder's films. shed his tough guy image to give one of his warmest performances in "Sabrina". , not usually known for comedy, was memorable in a high-octane comic role for Wilder's "".

Wilder mentored and was the first director to pair him with , in "" (1966). Wilder had great respect for Lemmon, calling him the hardest working actor he had ever met. Remarkably, the film was shot in black and white, as were the vast majority of Wilder's films throughout his career.

Wilder's films often lacked any discernible political tone or sympathies, which was not unintentional. He was less interested in current political fashions than in human nature and the issues that confronted ordinary people. He was not affected by the Hollywood blacklist, and had little sympathy for those who were. Of the blacklisted 'Hollywood Ten' Wilder famously quipped, "Of the ten, two had talent, and the rest were just unfriendly".

Wilder died in 2002 of at the age of 95 after battling health problems, including cancer, in Los Angeles, and was interred in the in next to Jack Lemmon.

Wilder died the same day as two other comedy legends: and .

Wilder holds a significant place in the history of Hollywood censorship for expanding the range of acceptable subject matter. He is responsible for two of the film noir era's most definitive films in "Double Indemnity" and "Sunset Boulevard". Along with , he leads the list of films on the American Film Institute's list of 100 funniest American films with 5 films written and holds the honor of holding the top spot with "". Also on the list are "" and "" which he directed, and "" and "" which he co-wrote. The AFI has ranked four of Wilder's films among their top 100 American films of the 20th century: "Sunset Boulevard" (no. 12), "Some Like It Hot" (no. 14), "Double Indemnity" (no. 38) and "The Apartment" (no. 93).

*Wilder reveled in poking fun at those who took politics too seriously. In "Ball of Fire", his queen 'Sugarpuss' points at her sore throat and complains "Pink? It's as red as the "" and twice as sore." Later, she gives the overbearing and unsmiling the name "Franco."
*Wilder is sometimes confused with director ; the confusion is understandable, as both were German-speaking s with similar backgrounds and names. However, their output as directors was quite different, with Wyler preferring to direct epics and heavy dramas and Wilder noted for his comedies and type dramas.

*Wilder's 12 nominations for screenwriting were a record until 1997 when received a 13th nomination for "".

*Wilder is one of only four people who have won three Academy Awards for producing, directing and writing the same film ("The Apartment").

*Wilder once said: "My English is a mixture between and ."

*Spanish filmmaker said in his acceptance speech for the 1993 Best Non-English Speaking Film Oscar: "I would like to believe in God in order to thank him. But I just believe in Billy Wilder... so, thank you Mr. Wilder." According to Trueba, Wilder called him the day after and told him: "Fernando, it's God."

*When Director Sam Mendes won the best director Academy Award for , while accpting the oscar he said he would just like to have some of Wilder's talent.

*Wilder died the same day as and . The next day, French top-ranking newspaper "" titled its first-page "Billy Wilder is dead. Nobody is perfect." This was a reference to the famous closing line of his film "Some Like it Hot".

*Wilder was the Editors Supervisor in the 1945 US Army Signal Corps documentary/propaganda film "".