listen); born 27 December 1948) is a French actor and film-maker. He has won a number of honours including a nomination for an Academy Award for the title role in Cyrano de Bergerac and the Golden Globe award for Best Actor in Green Card. In addition to a number of American awards, Depardieu is a Chevalier of the Légion d'honneur, Chevalier of the Ordre national du Mérite and has twice won the César Award for Best Actor.

Gérard Depardieu was born in Châteauroux, Indre, France. He is one of five children of Anne Jeanne Josèphe "la Liette" (née Marillier) and René Maxime Lionel "le Dédé" Depardieu, a metal worker and volunteer fireman.[1][2] His mother did not want more children and told Depardieu that she had tried to abort him with knitting needles.[1] He has stated that as a child he would inspect his hands for scars from the needles.[1]

Depardieu spent more time on the street than in the classroom and left school at 13.[citation needed][3]

At the age of 16, Depardieu left Châteauroux for Paris. There he began acting in the new comedy theatre Café de la Gare, along with Patrick Dewaere, Romain Bouteille, Sotha, Coluche, and Miou-Miou.[4] His breakout film role came in 1974 playing Jean-Claude in Bertrand Blier's comedy Going Places.[5] He studied dancing under Jean-Laurent Cochet, and went on to become one of France's most renowned actors. In 1986, his international fame grew as a result of his performance as a doomed, hunchbacked farmer in the film Jean de Florette. Five years later he won a César for his starring role in Cyrano de Bergerac.

Gerard crossed over into the American film market by co-starring in the 1990 film Green Card. He has since acted in many English language films including. The Man in the Iron Mask, 102 Dalmatians, and Last Holiday. 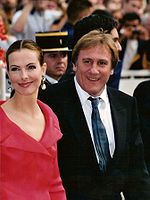 Depardieu with Carole Bouquet at the 2001 Cannes Film Festival.

More recently, he has played Obélix in the three Astérix movies in which he is said to have discovered Melanie Laurent when she was 14.[6] In 2010 Depardieu signed a contract with Bank Zachodni WBK, a Polish bank, to appear in its commercials.[7]

In 1970, Depardieu married Élisabeth Guignot, with whom he had two children, actor Guillaume (1971–2008) and actress Julie (1973). On 28 January 1992, while separated from Élisabeth, he had a daughter, Roxanne, with the model Karine Sylla. In 1996 he divorced Élisabeth and began a relationship with actress Carole Bouquet, who was his partner from 1997 to 2005.[8] On 14 July 2006, he had a son, Jean, with French-Cambodian Helene Bizot (not to be confused with Hélène Bizot), according to the issue 3089 (31 July 2008) of Paris Match and the Phnom Penh Post.[9] Since 2005, Depardieu has lived with a Harvard-educated novelist, Clémentine Igou. On 13 October 2008, his son Guillaume died at the age of 37 from complications linked to a sudden case of pneumonia.

Depardieu is co-owner of a winery in Condrieu, in the Northern Rhone, with partner Alain Paret, where the duo make wines using the viognier grape. Their Lys de Volan Condrieu frequently receives excellent reviews in the wine press.[citation needed] Depardieu became Paret's partner after tasting the wine in a restaurant. He then called Paret and offered to buy a share of the winemaking operation.[10]

In a interview with Stefan Grisseman, published in the September 2010 issue of the Austrian magazine Profil, Depardieu made scathing comments about Juliette Binoche.[11] While promoting her film Copie Conforme in the UK, Binoche commented about these remarks to film magazine Empire. 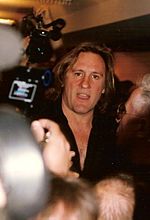 Depardieu at the 1994 Cannes Film Festival.

Depardieu has been nominated for the Best Actor in a Leading Role César 15 times during his career and won it twice, in 1981 and 1991. He was also nominated for an Oscar in 1990 for his role in Cyrano de Bergerac.