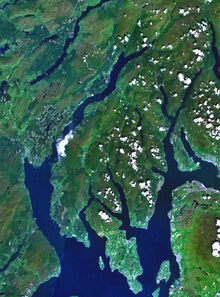 Cowal (Scottish Gaelic: Còmhghall) is a peninsula in Argyll and Bute in the Scottish Highlands.

The northern part of Cowal is mostly the mountainous Argyll Forest Park. Cowal is separated from the Kintyre peninsula to the west by Loch Fyne, and from Inverclyde and North Ayrshire to the east by the Firth of Clyde. The sea lochs Loch Long and Loch Goil lie to the northeast, and the south of the peninsula is split into three forks by two further sea lochs, Loch Striven and to its west Loch Riddon. The Isle of Bute lies to the south of Cowal, separated from the peninsula by the narrow Kyles of Bute which connect the Clyde to Loch Riddon.

Much of Cowal was once held by the Lamont Clan; encroachments by the neighbouring Campbells and other powerful families reduced the Lamont holdings in the Covenanting Wars of the seventeenth century.

Cowal's only burgh is Dunoon in the south east,[1] from which ferries sail to Gourock in Inverclyde. Other ferries run from Portavadie in the west to Tarbert in Kintyre, and from Colintraive in the south to Rhubodach on the Isle of Bute.

The Arrochar Alps and Ardgoil peninsula in the north frindge the edges of the sea lochs whilst the Argyll Forest Park spreads out across the hillsides and mountain passes in north part of cowal, making this one of the most remote areas in the west of Scotland.

The towns and villages in Cowal are: Innellan, Toward, Castle Toward, Dunoon, Hunters Quay, Sandbank, Kilmun, Strone, Ardentinny, Blairmore in the South East part facing the lowlands at Inverclyde. Carrick Castle, Lochgoilhead, Ardgartan, Arrochar, Rest and be thankful, Succoth, Tarbet, Inverglas, Ardlui, Cairndow, St Catherines in the north of Cowal in the Arrochar Alps. Creggans, Strachur, Castle Lachlan, Otter Ferry, Kilfinan, Portavadie are on the eastern shore of Loch Fyne facing Mid-Argyll and Kintyre. Kames, Tighnabruaich, Colintraive,are on the Kyles of Bute. From the Kyles of Bute Ormidale leads into Glendaruel.Leaving the Holy Loch westwards brings you to Clachaig, Glean Lean, and the Tarsan dam leading down to Ardtaraig on Loch Striven.