The Orthomyxoviridae (orthos, Greek for "straight"; myxa, Greek for "mucus")[1] are a family of RNA viruses that includes five genera: Influenzavirus A, Influenzavirus B, Influenzavirus C, Isavirus and Thogotovirus. A sixth has recently been described.[2] The first three genera contain viruses that cause influenza in vertebrates, including birds (see also avian influenza), humans, and other mammals. Isaviruses infect salmon; thogotoviruses infect vertebrates and invertebrates, such as mosquitoes and sea lice.[3][4][5]

The three genera of Influenzavirus, which are identified by antigenic differences in their nucleoprotein and matrix protein infect vertebrates as follows:

Influenza A viruses are further classified, based on the viral surface proteins hemagglutinin (HA or H) and neuraminidase (NA or N)... Sixteen H subtypes (or serotypes) and nine N subtypes of influenza A virus have been identified. 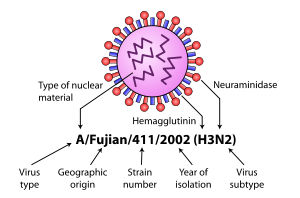 Examples of the nomenclature are:

The type A viruses are the most virulent human pathogens among the three influenza types and causes the most severe disease. The serotypes that have been confirmed in humans, ordered by the number of known human pandemic deaths, are:

Influenza B virus is almost exclusively a human pathogen, and is less common than influenza A. The only other animal known to be susceptible to influenza B infection is the seal.[13] This type of influenza mutates at a rate 2-3 times lower than type A[14] and consequently is less genetically diverse, with only one influenza B serotype.[6] As a result of this lack of antigenic diversity, a degree of immunity to influenza B is usually acquired at an early age. However, influenza B mutates enough that lasting immunity is not possible.[15] This reduced rate of antigenic change, combined with its limited host range (inhibiting cross species antigenic shift), ensures that pandemics of influenza B do not occur.[16]

The influenza C virus infects humans and pigs, and can cause severe illness and local epidemics.[17] However, influenza C is less common than the other types and usually seems to cause mild disease in children.[18][19]

Structure of the influenza virion. The hemagglutinin (HA) and neuraminidase (NA) proteins are shown on the surface of the particle. The viral RNAs that make up the genome are shown as red coils inside the particle and bound to Ribonuclear Proteins (RNPs).

The virion is pleomorphic, the envelope can occur in spherical and filamentous forms. In general the virus's morphology is spherical with particles 50 to 120 nm in diameter, or filamentous virions 20 nm in diameter and 200 to 300 (-3000) nm long. There are some 500 distinct spike-like surface projections of the envelope each projecting 10 to 14 nm from the surface with some types (i.e. hemagglutinin esterase (HEF)) densely dispersed over the surface, and with others (i.e. hemagglutinin (HA)) spaced widely apart.

The major glycoprotein (HA) is interposed irregularly by clusters of neuraminidase (NA), with a ratio of HA to NA of about 4-5 to 1.

Lipoprotein membranes enclose the nucleocapsids; nucleoproteins of different size classes with a loop at each end; the arrangement within the virion is uncertain. The nucleocapsids are filamentous and fall in the range of 50 to 130 nm long and 9 to 15 nm in diameter. They have a helical symmetry.

Viruses of this family contain 6 to 8 segments of linear negative-sense single stranded RNA.[20]

The following applies for Influenza A viruses, although other influenza strains are very similar in structure:[21]

The influenza A virus particle or virion is 80-120 nm in diameter and usually roughly spherical, although filamentous forms can occur.[22] Unusually for a virus, the influenza A genome is not a single piece of nucleic acid; instead, it contains eight pieces of segmented negative-sense RNA (13.5 kilobases total), which encode 11 proteins (HA, NA, NP, M1, M2, NS1, NEP, PA, PB1, PB1-F2, PB2).[23] The best-characterised of these viral proteins are hemagglutinin and neuraminidase, two large glycoproteins found on the outside of the viral particles. Neuraminidase is an enzyme involved in the release of progeny virus from infected cells, by cleaving sugars that bind the mature viral particles. By contrast, hemagglutinin is a lectin that mediates binding of the virus to target cells and entry of the viral genome into the target cell.[24] The hemagglutinin (H) and neuraminidase (N) proteins are targets for antiviral drugs.[25] These proteins are also recognised by antibodies, i.e. they are antigens.[12] The responses of antibodies to these proteins are used to classify the different serotypes of influenza A viruses, hence the H and N in H5N1. 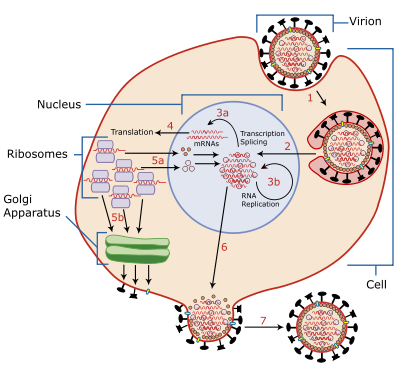 Invasion and replication of the influenza virus. The steps in this process are discussed in the text.

Typically, influenza is transmitted from infected mammals through the air by coughs or sneezes, creating aerosols containing the virus, and from infected birds through their droppings. Influenza can also be transmitted by saliva, nasal secretions, feces and blood. Infections occur through contact with these bodily fluids or with contaminated surfaces. Flu viruses can remain infectious for about one week at human body temperature, over 30 days at 0 °C (32 °F), and indefinitely at very low temperatures (such as lakes in northeast Siberia). They can be inactivated easily by disinfectants and detergents.[26][27][28]

The viruses bind to a cell through interactions between its hemagglutinin glycoprotein and sialic acid sugars on the surfaces of epithelial cells in the lung and throat (Stage 1 in infection figure).[29] The cell imports the virus by endocytosis. In the acidic endosome, part of the haemagglutinin protein fuses the viral envelope with the vacuole's membrane, releasing the viral RNA (vRNA) molecules, accessory proteins and RNA-dependent RNA polymerase into the cytoplasm (Stage 2).[30] These proteins and vRNA form a complex that is transported into the cell nucleus, where the RNA-dependent RNA transcriptase begins transcribing complementary positive-sense cRNA (Steps 3a and b).[31] The cRNA is either exported into the cytoplasm and translated (step 4), or remains in the nucleus. Newly-synthesised viral proteins are either secreted through the Golgi apparatus onto the cell surface (in the case of neuraminidase and hemagglutinin, step 5b) or transported back into the nucleus to bind vRNA and form new viral genome particles (step 5a). Other viral proteins have multiple actions in the host cell, including degrading cellular mRNA and using the released nucleotides for vRNA synthesis and also inhibiting translation of host-cell mRNAs.[32]

Negative-sense vRNAs that form the genomes of future viruses, RNA-dependent RNA transcriptase, and other viral proteins are assembled into a virion. Hemagglutinin and neuraminidase molecules cluster into a bulge in the cell membrane. The vRNA and viral core proteins leave the nucleus and enter this membrane protrusion (step 6). The mature virus buds off from the cell in a sphere of host phospholipid membrane, acquiring hemagglutinin and neuraminidase with this membrane coat (step 7).[33] As before, the viruses adhere to the cell through hemagglutinin; the mature viruses detach once their neuraminidase has cleaved sialic acid residues from the host cell.[29] After the release of new influenza virus, the host cell dies.

Since RNA proofreading enzymes are absent, the RNA-dependent RNA transcriptase makes a single nucleotide insertion error roughly every 10 thousand nucleotides, which is the approximate length of the influenza vRNA. Hence, nearly every newly-manufactured influenza virus will contain a mutation in its genome.[34] The separation of the genome into eight separate segments of vRNA allows mixing (reassortment) of the genes if more than one variety of influenza virus has infected the same cell (superinfection). The resulting alteration in the genome segments packaged in to viral progeny confers new behavior, sometimes the ability to infect new host species or to overcome protective immunity of host populations to its old genome (in which case it is called an antigenic shift).[12]

Vaccines and drugs are, however, available for the prophylaxis and treatment of influenza virus infections. Vaccines are composed of either inactivated or live attenuated virions of the H1N1 and H3N2 human influenza A viruses as well as those of influenza B viruses. Because the antigenicities of the wild viruses evolve, vaccines are reformulated annually by updating the seed strains. However, when the antigenicities of the seed strains and wild viruses do not match, vaccines fail to protect the vaccinees. In addition, even when they do match, escape mutants are often generated. The drugs include amantadine, which inhibits the uncoating of virions by interfering with M2, and oseltamivir (marketed under the brand name Tamiflu), which inhibits the release of virions from infected cells by interfering with NA. However, escape mutants are often generated for the former drug and less frequently for the latter drug.[36]