Coin collecting
This article is about a hobby. For the scientific study of currency, see Numismatics.

Coin collecting is the collecting or trading of coins or other forms of minted legal tender.

Coins of interest to collectors often include those that circulated for only a brief time, coins with mint errors and especially beautiful or historically significant pieces. Coin collecting can be differentiated from numismatics in that the latter is the systematic study of currency. Though closely related, the two disciplines are not necessarily the same. A numismatist may or may not be a coin collector and vice versa.

People have hoarded coins for their bullion value for as long as coins have been minted.[1] However, the collection of coins for their artistic value was a later development. Evidence from the archaeological and historical record of Ancient Rome and medieval Mesopotamia[2] indicates that coins were collected and catalogued by scholars and state treasuries. It also seems probable that individual citizens collected old, exotic or commemorative coins as an affordable, portable form of art.[3] According to Suetonius in his De vita Caesarum (The Lives of the Twelve Caesars), written in the first century CE, the emperor Augustus sometimes presented old and exotic coins to friends and courtiers during festivals and other special occasions.[4]

Contemporary coin collecting and appreciation began around the fourteenth century. During the Renaissance coin collecting became a fad among some members of the privileged classes. The Italian scholar and poet Petrarch is credited with being the pursuit's first and most famous aficionado. Following his lead, many European kings, princes, and other nobility kept collections of ancient coins. Some of notable collectors were Pope Boniface VIII, Emperor Maximilian[disambiguation needed

] of the Holy Roman Empire, Louis XIV of France, Ferdinand I, Henry IV of France and Elector Joachim II of Brandenburg, who started the Berlin Coin Cabinet (German: Münzkabinett Berlin). Perhaps because only the very wealthy could afford the pursuit, in Renaissance times coin collecting became known as the "Hobby of Kings."[5][6][7]

During the 17th and 18th centuries coin collecting remained a pursuit of the well-to-do. But rational, Enlightenment thinking led to a more systematic approach to accumulation and study. Numismatics as an academic discipline emerged in these centuries at the same time as coin collecting became a leisure pursuit of a growing middle class, eager to prove their wealth and sophistication. During the 19th and 20th centuries, coin collecting increased further in popularity. The market for coins expanded to include, not only antique coins, but foreign or otherwise exotic currency. Coins shows, trade associations and regulatory bodies emerged during these decades.[3] The first international convention for coin collectors was held August 15–18, 1962, in Detroit, Michigan, and was sponsored by the American Numismatic Association and the Royal Canadian Numismatic Association. Attendance was estimated at 40,000.[5] As one of the oldest and most popular world pastimes, coin collecting is now often referred to as the "King of Hobbies".[8][9]

The motivations for collecting are varied. Possibly the most common type of collector is the hobbyist, who amasses a collection purely for fun with no real expectation of profit. This is especially true of casual collectors and children who collect items on the basis of chance and personal interest.

Another frequent reason for purchasing coins is as an investment. As with stamps, precious metals or other commodities, coin prices are cyclical based on supply and demand. Prices drop for coins that are not in long-term demand, and increase along with a coin's perceived or intrinsic value. Investors buy with the expectation that the value of their purchase will increase over the long term. As with all types of investment, the principle of caveat emptor applies and study is recommended before buying. Likewise, as with most collectibles, a coin collection does not produce income until it is sold, and may even incur costs (for example, the cost of safe deposit box storage) in the interim.[10]

Coin hoarders may be similar to investors in the sense that they accumulate coins for potential long-term profit. However, unlike investors, they typically do not take into account aesthetic considerations; rather they gather whatever quantity of coins they can and hold them. This is most common with coins whose metal value exceeds their spending value.[11]

Speculators, be they amateurs or commercial buyers, generally purchase coins in bulk and often act with the expectation of short-term profit. They may wish to take advantage of a spike in demand for a particular coin (for example, during the annual release of Canadian numismatic collectibles from the Royal Canadian Mint). The speculator might hope to buy the coin in large lots and sell at profit within weeks or months.[10] Speculators may also buy common circulation coins for their intrinsic metal value. Coins without collectible value may be melted down or distributed as bullion for commercial purposes. Typically they purchase coins that are composed of rare or precious metals, or coins that have a high purity of a specific metal.[12]

A final type of collector is the inheritor, an accidental collector who acquires coins (a collection, hoard or investment) from another person as part of an inheritance. The inheritor may not necessarily have an interest in or know anything about numismatics at the time of the acquisition.[12]

Casual coin collectors often begin the hobby by saving notable coins found by chance. These coins may be pocket change left from an international trip or an old coin found in circulation.

Usually, if the enthusiasm of the novice increases over time, random coins found in circulation are not enough to satisfy their interest. The hobbyist may then trade coins in a coin club or buy coins from dealers or mints. Their collection takes on a more specific focus.

Some enthusiasts become generalists and accumulate a few examples from a broad variety of historical or geographically significant coins. Given enough resources, this can result in a vast collection. King Farouk of Egypt was a generalist with a collection famous for its scope and variety.[13]

Most collectors decide to focus their financial resources on a narrower, specialist interest. Some collectors focus on coins of a certain nation or historic period. Others will seek error coins. Still others might focus on exonumia such as currency, tokens or challenge coins. For example, John Yarwood of Melbourne is the first person to take a serious interest in British military money (especially tokens).[14]

Some collectors are completists and seek an example of every type of coin within a certain category. Perhaps the most famous of these is Louis Eliasberg, the only collector thus far to assemble a complete set of known coins of the United States.

Coin collecting can become a competitive activity, as prompted by the recent emergence of PCGS (Professional Coin Grading Service) and NGC (Numismatic Guarantee Corporation) Registry Sets. Registry Sets are private collections of coins verified for ownership and quality by numismatic grading services. The grading services assess collections, seal the coins in clear plastic holders, then register and publish the results. This can lead to very high prices as dedicated collectors compete for the very best specimens of, for example, each date and mint mark combination.[15][16]

A few common themes are often combined into a goal for a collection: 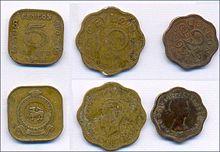 Some colonial coins of Ceylon.

A false 20 Lira coin, 1927. With the head of Benito Mussolini on the obverse, this is an obvious copy. Italian coins during the fascist period bore the portrait of King Victor Emmanuel III.[24][25]

Collecting counterfeits and forgeries is a controversial area because of the possibility that counterfeits might someday reenter the coin market as authentic coins, but US statutory and case law do not explicitly prohibit possession of counterfeit coins.[22]

In coin collecting, the condition of a coin is paramount to its value; a high-quality example is often worth many times more than a poor example. Collectors have created systems to describe the overall condition of coins.

In the early days of coin collecting—before the development of a large international coin market—extremely precise grades were not needed. Coins were described using only three adjectives: "good," "fine" or "uncirculated". By the mid 20th century, with the growing market for rare coins, the Sheldon system was adopted by the American Numismatic Association and most coin professionals in the North America. It uses a 1–70 numbering scale, where 70 represents a perfect specimen and 1 represents a barely identifiable coin. The Sheldon Scale uses descriptions and numeric grades for coins (from highest to lowest) is as follows:[30][31][32] 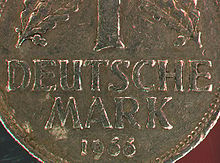 This Deutsche Mark coin shows blemishes and rim dents that would detract from its grade in appraisal.

While the Sheldon Scale is universally acknowledged, coin experts in Europe and elsewhere often shun the numerical system, preferring to rate specimens on a purely descriptive, or adjectival, scale. Nevertheless, most grading systems use similar terminology and values and remain mutually intelligible.[33][34][35] 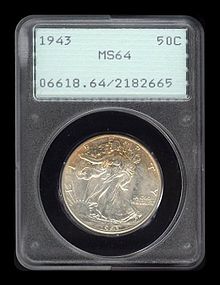 When evaluating a coin, the following—often subjective—factors may be considered: 1) "eye appeal" or the aesthetic interest of the coin; 2) dents on the rim; 3) unsightly scratches or other blemishes on the surface of the coin; 4) luster; 5) toning; 6) level of detail retained, where a coin with full details obviously is valued higher than one with worn details. If the coin is judged favorably in all of these criteria, it will generally be awarded a higher grade.[30]

Damage of any sort (e.g., holes, edge dents, repairs, cleaning, re-engraving or gouges) can substantially reduce the value of a coin. Specimens are occasionally cleaned or polished in an attempt to pass them off as higher grades or as uncirculated strikes. Because of the substantially lower prices for cleaned or damaged coins, some enthusiasts specialize in their collection.[36]

Coin grading services are a relatively recent phenomenon, having emerged in the 1980s as a response to the need for buyers and sellers to agree on common measures of a coin's value.[37] Official grading is an effort to bring more confidence to investors in rare coins. Grading services certify the authenticity and rate the quality of individual coins, thus—it is hoped—establishing the worth of the coin relative to all others of its kind. Many coin grading services will also seal coins in a labeled, air-tight plastic holder, ensuring the coin is protected from deterioration. This process is commonly known as coin slabbing and is most prevalent in the US market.[38][39]

While professional grading has reduced the number of counterfeits foisted upon investors and has improved buyer confidence substantially, the goal of creating a sight-unseen market for coins remains somewhat elusive. Professional grading services remain the subject of controversy because grading is ultimately subjective; coins may receive different grades by different services or even upon resubmission to the same service. Due to potentially large differences in value over slight differences in a coin's condition, some commercial coin dealers will repeatedly resubmit a coin to a grading service in the hope of a higher grade.[40] Furthermore, grading services are not free, and by using them collectors funnel money into an ancillary aspect of the hobby, instead of purchasing additional material for their collections.

The two most prominent grading services at present are the Numismatic Guaranty Corporation (NGC) and the Professional Coin Grading Service (PCGS).[39] The least reputable coin dealers have a growing tendency to sell higher graded coins via sales pitches claiming that grading removes subjectivity as to the value of mint state coins. Dealers that sponsor infomercials on shortwave radio are notorious for such sales pitches, most notably Discount Gold & Silver Trading on WWCR.