I Walk the Line (album)

I Walk the Line (album) 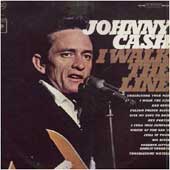 
"I Walk the Line" is the eighteenth by country singer , released on in 1964 (see ). Aside from several new versions of previously recorded Cash songs, the album contains several tracks which hadn't been performed by Cash until then; two of the latter would go on to become relatively successful singles.

* [http://www.luma-electronic.cz/lp/c/Cash/cash_iwalktheline.htm Luma Electronic entry on "I Walk the Line"]