Some of Microsoft's early products included hidden Easter eggs. Microsoft formally stopped including Easter eggs in its programs as part of its Trustworthy Computing Initiative in 2002.[1]

The Microsoft Bear is a mascot of the Windows 3.1 (and later Windows 95) team. It was the teddy bear that one of the senior developers on the team used to carry around. He makes several cameo appearances in Windows:

During the development of Microsoft Windows 95 the shell developers had several stuffed animals as mascots. One was Bear, who was a hold-over from Windows 3.1. There were two others, bunnies, as well: the smaller one called "16-bit Bunny" and the larger one called "32-bit Bunny". The naming is connected to the fact that Windows 95 was the transitional OS.

In the case of the 32-bit Bunny, knowledge of it was actually somewhat useful to end-users.[citation needed] These features needed to be turned on while Windows 95 was tested and the secret of turning them on was not removed. Some of the desktop features, including full window drag and anti-aliased fonts, could be turned on by placing the line ILOVEBUNNY32=1 under the windows section in win.ini.[citation needed]

Just like the Bear, the Bunny has an exported function named after him. This time, it's BUNNY_351 in krnl386.exe.

Also, the Bunny is the icon for rumor.exe (Microsoft Party Line) in some Windows Chicago betas.

In Word for Windows 2, there is a simple animation involving a WordPerfect 'Monster', a fireworks display and credits roll in the About box. The user's name (entered in Tools Options) was appended to the end of the "Thanks" section of the credits.

The tip of the day would sometimes display the following fun and inspirational tips. They could also be viewed in the help file. 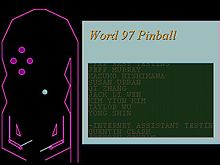 Following in the tradition of hiding a small game in Microsoft Office programs, using Microsoft Excel 2000 and the Microsoft Office Web Components, a small 3-D game called "Dev Hunter" (inspired by Spy Hunter) is accessible.[10] DirectX must be installed for this to work, and the egg is incompatible with certain service pack upgrades.

Please Take Note: These sentences are all capitalized in the game.

A car-driving game can be found in Ms Excel 2000 by following these steps:

The default picture for new contacts is a silhouette of Bill Gates.[12]

Microsoft decided to include more Easter eggs after 2000 in the Mac version of Office 2004. The game Asteroids is included in the Microsoft Office Notifications application.[13] 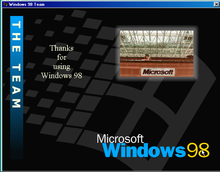 An Easter egg that displays the names of all the volcanoes in the United States is found on all Microsoft Windows Operating Systems prior to XP in the "3Dtext" screensaver.[14]

Windows 3.1 has a developer credits page, as described above.

Windows 95 has an animated presentation of the Win95 developers, complete with music.

The pipe screensaver in Windows 95 through to ME inclusive very occasionally has the Utah Teapot appear instead of a standard joint. It only appears if the pipes are "multiple", pipe-style "standard", joint-type "multiple" and texture "solid" under the screensaver's settings.[16]

Windows 2000 and XP have an undocumented texture in the pipes (sspipes.scr) screensaver makes the pipes red and white similar to candy canes.[17]

In the Windows 2000 and XP Pinball games, typing "hidden test" when the game is active starts test mode. In this mode, the user can drag the ball with the mouse cursor, and can press H to instantly get a high score, R to increase rank, M to display system memory, and Y to show frame rate. Typing "1max" at the start of a new ball awards an extra ball. Similarly, the user can type "gmax" to activate the gravity well, "rmax" to go up a rank, and "bmax" for unlimited balls (this last one results in an endless game, thereby precluding activation of the other cheats until the game is restarted).[citation needed]

In Windows 2000 and Windows XP (through SP2), the game Minesweeper contains multiple easter eggs. If you start the game, type "xyzzy", and then press shift and enter simultaneously, the top left-most pixel of the monitor (not the window) will be white or black when the mouse is hovered above a square, indicating that the square is either safe or mined, respectively.[18] (The first click anywhere in Minesweeper is never a mine. A click on a 'black' square, as first click, moves that mine away). Also, if the high scores of all three game sizes are credited to the name "WRAPFIELD", the number in each cell that counts the adjacent mines will treat the board as wrapping around the edges; i.e., cells along an edge will be counted as adjacent to the opposite edge. These easter eggs were removed in Windows XP Service Pack 3.

Three images are embedded in the surface of Windows Vista's installation DVD. One of the images is the faces of the members of Microsoft's antipiracy team who worked on the hologram.[19]

Acid1 is included as an offline Easter egg, accessible by typing 'about:tasman', in Internet Explorer 5 for Mac OS with the text replaced by the names of the developers.[21]

Hover! is a video game that came bundled with the CD version of Windows 95. It was a showcase for the advanced multimedia capabilities available on personal computers at the time. It is still available from Microsoft[22] and can be run on all of Microsoft's operating systems released since Windows 95 including Windows 7.

Pictures of everyone involved with the Hover! project are displayed along the maze walls upon completion of initialization of an introductory level.

The following are not Easter eggs, but rather features unexpected by many users of Microsoft products.

Every version of Microsoft Word from 97 to 2010 (Windows) or 2004 to 2011 (Word:Mac) contains a function to create filler text: typing =rand() in a Word document and hitting Enter results in 3 paragraphs of 5 repetitions of the pangram "The quick brown fox jumps over the lazy dog". Typing =rand(X,Y) (with numbers for X and Y) results in X paragraphs of Y repetitions of the sentence. For example, =rand(10,10) will produce ten paragraphs, each with ten repetitions. Microsoft has officially described this as a feature and not an Easter egg.[23] In Microsoft Word 2007, the repeated sentence is replaced with a longer text:

When =rand(1,1) is written, only a simple sentence is shown: in English, it is "On the Insert tab, the galleries include items that are designed to coordinate with the overall look of your document."

In Word 2007, the 'The quick brown fox jumps over the lazy dog' text is available by typing the command =rand.old () and pressing enter.

All of these features will be disabled when "Replace text as you type" is turned off.

Since version 5, Excel has possessed a "datedif" function, which calculates the difference in whole days, months or years between two dates. Although this function is still present in Excel 2007 and 2010, it was only documented in Excel 2000.[24]

In Microsoft Windows, it is not possible to create or rename a folder called con (short for "console") because it is a reserved DOS device name along with prn, aux, and nul. This has been subject to a hoax that claims Microsoft is unable to explain why.[25]

The DeskBar is a hidden feature of Windows 98 Second Edition, probably because there was not enough time to finish it before the release.[26]

In Windows XP, a .wma file named title (an environmental mix by Brian Eno) is found under the system directory. This is the background music played during the initial configuration wizard used to perform tasks such as setting up user accounts the first time that a new installation of Windows XP is used.

The so-called Windows 7 "God Mode" is commonly mistaken for an easter egg. Creating a folder that references a specific global unique identifier allows for the creation of a shortcut to a location; in the case of "God Mode" it creates a control panel applet with all control panel items view enabled.