Moss (help·info) is a coastal city and a municipality in Østfold county, Norway. The administrative centre of the municipality is the town of Moss. The city of Moss was established as a municipality on 1 January 1838 (see formannskapsdistrikt). The rural municipality of Jeløy was merged with the city on 1 July 1943.

Its administrative district covers areas east of the town, such as the island of Dillingøy in the lake Vansjø. Parts of the town are located on the peninsula of Jeløy. Moss city has 40,217 inhabitants (2007).

The Old Norse form of the name was Mors. It may be derived from an old root mer- which means to "divide" or "split".

The coat-of-arms is from modern times. They were granted on 2 April 1954. Moss became a separate city in 1786 and received its first seal in the same year. The seal showed a church under some clouds, the whole thing placed within a circle. Above the circle there were some fasces, the freedom symbol of the late 19th century. A later seal, dating from around 1829, shows the same composition, but now also with six birds flying around the church.

When in the 1930s the city wanted to adopt a coat-of-arms and the birds were chosen as a possible symbol. The original birds probably were doves, symbol of peace. In 1934, the idea of the crow was launched, since the nickname of the inhabitants was 'crows'. The arms were finally granted in 1954 and show a yellow crow on a red background. It was designed by Christian Stenersen.[2][3]

There is a tale being told in Moss about the Church fire: The city of Moss always had a lot of crows, most likely because of the corn being harvested in the region. The fire disturbed the crows that started to make a lot of noise and the inhabitants rescued the church from total destruction. After this episode the idea of crow as arms was launched.

Archeological finds suggest that there were settlements in the area more than 7,000 years ago and continuously through the Iron Age, Viking Age, through to modern times. During the Viking era, the place was known as Varna (forne, vorne, front-protection?) and was the site of a cooperative for battleships held by local warlords on behalf of the king. 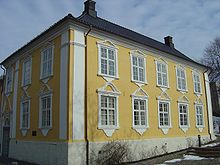 Moss Ironworks, the signingplace of Convention of Moss

The first literary reference to the name Mo(u)ſs(ß) is from 1390 "Gothic Minuscule", and by then the town had become a commercial center with craftsmen and mills. By the 16th century, the town's port was significant enough to warrant its own customs official. Liquor distilleries became one of the dominant industries, and it was not until 1607, after the Reformation, that the town got its own church.

By 1700, Moss had become a hub for both ship and land traffic between Copenhagen and Christiania, and in 1720 it received its charter as a merchant town, with its own official. This may have had background in an important battle in 1716 that was fought in the town square in Moss in which Norwegian troops commanded by Vincent Budde prevailed over invading Swedish forces, sent by Charles XII to capture Akershus Fortress. In 1767 a local resident built a "pleasure pavilion" near the town, which survives as the Hotel Refsnes Gods.[4]

In 1814, Moss became the site for the signing of the Convention of Moss, which effectively put an end to the Dano-Norwegian kingdom. This set the stage for economic development that has persisted to this day.

On the morning of 14 July 2006, a bolide exploded above the nearby town of Rygge - moments later, several stony meteorites fell over Moss. A number of meteorites were recovered by local residents and visiting meteorite hunters, which after analysis and classification, were found to be a rare type of carbonaceous chondrite.

Moss and Virginia Beach, Virginia in the United States are sister cities. On Good Friday, 27 March 1891, the Norwegian bark Dictator, whose home port was Moss, was lost in the treacherous waters of the Graveyard of the Atlantic. The ship had been en route to England from Pensacola, Florida with a cargo of Georgia Pine lumber. After being caught and disabled in a storm, she was headed for port at Hampton Roads, Virginia to make repairs when she encountered another storm just off Virginia Beach.

Working in the high winds and seas, lifesaving crews from shore were able to save some of the 17 persons aboard. However, the pregnant wife of Captain J.M. Jorgensen, Johanne, and their 4 year-old son Carl were among the 7 persons who drowned.[5]

The ship's wooden female figurehead had washed ashore. It was placed in a vertical position facing the ocean near the boardwalk as a memorial to those who lost their lives in the shipwreck. It was a landmark there for more than 60 years, but gradually became weathered and eroded.

In 1962, Norwegian sculptor Ørnulf Bast was commissioned to create two nine-foot bronze replicas of the original figurehead by the City of Moss. The Norwegian Lady Statues were unveiled on 22 September 1962. One was presented as a gift to Virginia Beach, and an exact duplicate was erected in Moss to unite the two sister cities. Each statue faces the other across the Atlantic Ocean.

On 13 October 1995, Her Majesty Queen Sonja of Norway visited the Norwegian Lady statue in Virginia Beach, and placed memorial flowers.

The town is known for paper mills, as well as metalworks and other factories. Dillingøy is known as a place for alternative non-military civil service. Moss is mentioned since the Renaissance and was the site of the signing of the Convention of Moss in 1814, which solidified the union with Sweden. The headquarters of textile producer Helly Hansen are located here. The maker of international hotel keycards, Trio Ving, also has their headquarters here.

In the autumn of 2007, the military airport called Rygge just outside Moss was converted into a civil airport. Moss Airport, Rygge received the IATA code RYG. The project initially started in 1992 was dubbed RSL an acronym for Rygge sivile lufthavn (Rygge civilian airport).

A ferry line (the Bastø Ferry) across the Oslo Fjord runs between Moss and Horten in Vestfold.

The following cities are twinned with Moss:[6]