Currently, the People's Revolutionary Armed Forces (FARP) of Cape Verde are undergoing major reorganisation.[citation needed] The force has two independent branches, the Army and the Coast Guard. Both branches have their own air arm made up of mostly surveillance and transport aircraft. The combined force comprises about 1,200 soldiers, marines and coast guard personnel.

In the future, however, the military will be reduced to about 1,000 men. The Branches are to be reshuffled as well. The Army is going to be called the Cape Verdean National Guard, and it will be divided into three semi-autonomous branches: 1. The Military Police, 2. Os Fuzileiros (Marines), and 3. the Infantry Battalion of the National Guard. A Special Operation Unit is being created and is going to be attached to the marine brigade. The Cape Verdean government aims to make the Armed Forces more flexible and able to deal with terrorism, drug trafficking, disaster relief, and control its territorial waters.

The former Bulgarian Minister of Foreign Affairs Solomon Passy proposed, Cape Verde may enter the OSCE and the NATO.[1] 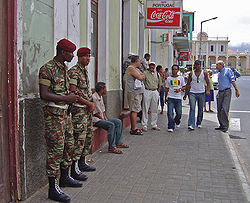 The Army also has its own air arm; after personnel training received from the USSR in 1982, three Antonov An-26 aircraft were delivered to Cape Verde - these were believed to be the only military aircraft possessed by the nation.[3] However these three aircraft were supplemented in 1991 by a Dornier Do 228 light aircraft equipped for use by the Coastguard, and, in the late 1990s by an EMB-110 aircraft from Brazil, similarly equipped for maritime operations. The government has been in negotiations with China to acquire multirole helicopters for both military and civilian use. 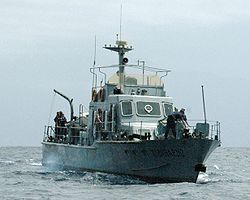